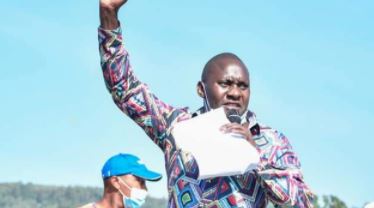 The announcement was made Thursday morning by the party's Interim Chair Johnson Muthama, who said Ngengele was selected through a scientific opinion poll based on the candidates' popularity.

“A scientific survey on the most popular candidate was carried out across the county and the results which were unveiled in a meeting attended by all the aspirants favored Urbanus Ngengele. The party therefore undertakes to field Ngengele to face off with other aspirants in the by election,” Muthama said.

He said out of the sixteen aspirants, two expressed dissatisfaction with the polls, and were accorded the liberty to run as independent candidates.

Ngengele will be officially unveiled tomorrow at UDA’s headquarters along Ngong Road.

Mwala MP Vincent Musyoka tweeted, "All of us in the hustler nation will rally behind Ngengele led by our able UDA chairman Senator Johnson Muthama.

He will face off with Wiper’s Agnes Kavindu and Maendeleo Chap Chap’s John Katuku.

A total of sixteen aspirants had lined up to seek UDA's nomination for the by-election.

UDA named their candidate a day after Kalonzo Musyoka’s Wiper party unveiled Muthama’s ex-wife, Agnes Kavindu as the choice of candidate for the by election.