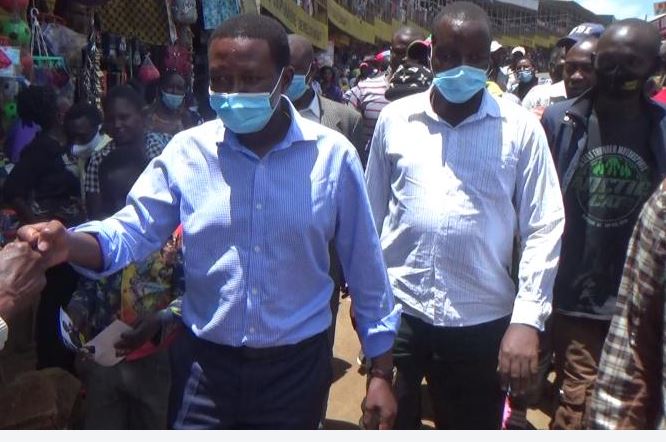 Mutua (pictured) who has announced his resolve to vie for the country’s top seat, was to visit the County after finishing a tour of the neighbouring Meru County where he was receiving for incorporation into his manifesto.

Mutua arrived in Chuka town few minutes to 1 pm and addressed the crowd that had gathered near Chuka stage before giving them a chance to air their views, an exercise he had estimated to take 45 minutes.

But the County Commander Charles Mbatu arrived immediately the first person had taken the microphone and directed Mutua’s vehicles leave the venue.

This forced Mr Mutua to cut short the session telling the people that he was the ultimate change the country needed to unlock its potential in Kenyans jobs, economic freedom, and unity if elected.

On his side, Mr Mbatu said the governor was only allowed to wave at people as he passes but not hold a public rally.

The Governor who is serving his last term heeded police directives adding that he was a peaceful leader who always fights for the unity of all Kenyans.

“I have come here peacefully and would wish to see a country where leaders are given time to sell their ideas without being booed,” said Dr Mutua after a group of young people chanting Deputy President William Ruto’s name tried to disrupt the meeting.

He said he was the only leader who did not have baggage, who is not divisive, one who does not keep grudges and one who will lead them despite their tribal, regional, economic and social status.

He said at the moment Kenya was like a computer that had crashed and he was ready to press the reboot button.

“We want a country where dreams can come true for every Kenyan,” said Dr Mutua.