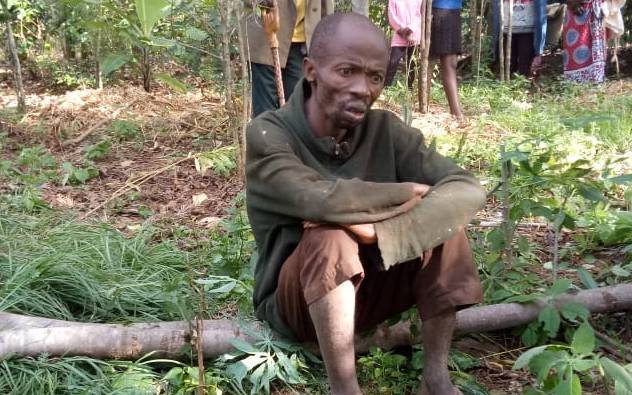 Residents of Gatituni village in Chuka, Tharaka Nithi County were left in disbelief after seeing a man come out of a 60-feet pit alive after 13 days.

Royford Mugambi, 42, who is said to be of unsound mind disappeared on May 22 only to be rescued from the pit on Wednesday evening.

His family members desperately combed the area for him after his disappearance and were losing hope after the search became unsuccessful.

His elder brother, Henry Gitonga, said they had been searching for him in various places including at the Chuka County Referral Hospital mortuary.

"We also reported his disappearance to the local administration and at Chuka Police Station too," said Gitonga, adding that they lost hope. They were relieved when they heard that their kin had been located in a pit where he was pulled out.

Mugambi (pictured) was miraculously discovered by a neighbour, John Mwenda, who said he was working near the pit dug by his father many years ago. Mwenda revealed that he heard someone calling and when he followed the direction where the voice was coming from, he was led to the pit when he found Mugambi.

He called Mugambi’s relatives and villagers who helped him out using a ladder and a rope.

A doctor advised that he be given glucose and milk for him to gain strength before he could be introduced to porridge and soft food.

Mugambi looked frail after going hungry several days in the dark pit. His trouser and top were dusty and he looked frightened and confused.

The villagers who pulled him out suspected that he may have been eating soil and drinking water in the pit for survival.