Village where Mzee once held Cabinet meeting under a tree

Mwanyani village in Machakos sits on the haunches of Iveti and Kiima Kimwe hills, roughly five kilometres outside the hills-ringed Machakos town. It is at this village that derives its name from cracked earth (Mwanya is a crack in Kikamba) that the Cabinet had its first and only open air sitting under a tree in March, 1982. It was a historic sitting led by former President Daniel Moi, then a 57-year-old politician burbling with energy. He had cautioned Cabinet members who included Charles Njonjo, perpetually a buff of designer pin-striped suits who was minister for Constitutional Affairs and Attorney General Joseph Kamere to dress casually because the event was not merely a talking affair. Also present were GG Kariuki, powerful minister in the Office of the President and Vice-President Mwai Kibaki among others. Older Mwanyani villagers have fond memories of how the President and his entourage sweated it out hurling stones and rocks into compartmented wire mesh boxes secured to create gabions to arrest soil erosion that had compromised soil fertility in the area, adversely affecting food production.

“Moi was easily the most active of the lot. As though obeying unpronounced orders, they stood in a single file and out of respect or peculiar sycophancy not to be seen to be outdoing the President, passed the heaviest rocks to Moi to throw into the gabions,” said Isaya Mang’eli, 78, a Mwanyani resident. As the exercise that saw the erstwhile yawning gullies of Mwanyani fill up with earth as time progressed, residents mobilised for the occasion planted trees that matured into a forest, part of which is alive to this day, hugging either side of the Machakos-Kitui road. But the gabions, left untended and vandalised over time have largely disappeared, save for shredded remnants that are an insult to the former President’s passion to safeguard the environment. The spot where the Cabinet sat is but a jungle where livestock graze, with nothing in place to perpetuate the historic event. Gone ostensibly to charcoal burning is the acacia tree under which the Cabinet met. 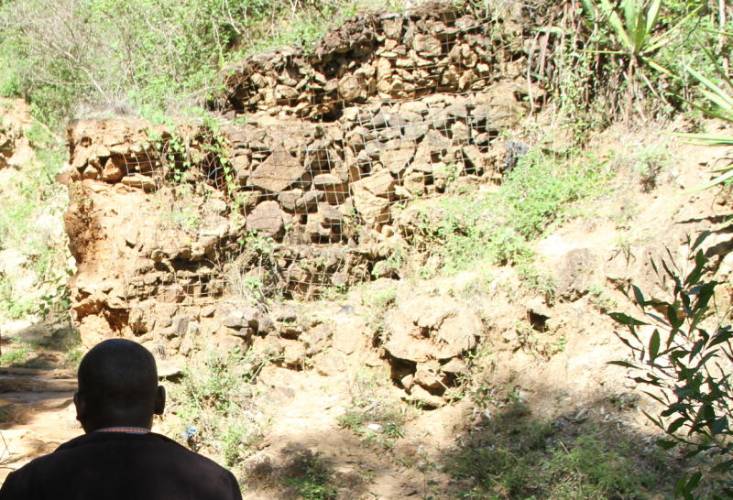 “This area was completely bare before the unique soil conservation exercise championed by President Moi. The gabions are no more, but the trees that he helped plant still remind us of a leader who valued environmental conservation and had the interest of his people at heart,” recalled Mbithe Mutiso.

According to Mbithe, degeneration of the gabions deteriorated after Moi’s retirement in 2002. “All caution was thrown to the winds after his departure from the scene,” she laments, disgust written all over her face. She said the exercise had its spiritual attributes as manifested by the Mwanyani AIC church that gained more significance with the presidential gabions. “People would come from all over the country to admire and learn from the gabions. They would end up praying at the church and contributing to its growth,” she reminisces with a smile. Moi spearheaded the building of several other soil conservation gabions after Mwanyani, among them Kathwana in an exercise that seemingly midwifed what is today the Tharaka Nithi County headquarters. The name of the sun soaked market tucked between Mutonga and Maara rivers was practically unknown before the 1984 presidential function that caught national attention. “We owe it to Moi that Kathwana, a remote and relatively unknown place before the gabions, is today the seat of power in the county,” said Mutwiiri Gathuri, a businessman.