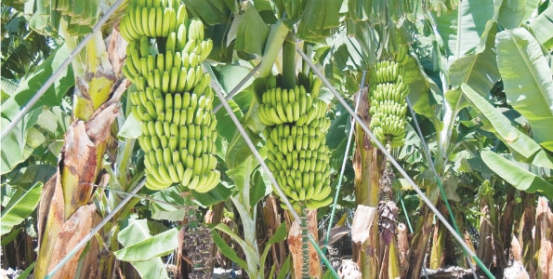 Banana farmers in Meru County have formed a cooperative union to enable them increase production and pursue value addition.

The farmers have put 7,038 hectares under production of bananas and become Kenya’s biggest producers of it.

“Now that Meru has become the biggest producer of banana in Kenya, we want to increase production. Value addition is the way to go. We also want to establish more factories for banana juices, wines, beer and flour,” said Mwirigi Karinga, the chairman of the newly-established Banana Innovation Platform.

“Now that banana farmers in Meru are feeding Kenya, we also want to empower them to produce wines, beers, flour. A factory will be established by October for production of the banana wine and beer,” said Dr Muthee.

Anne Kagendo, from Kaaria Banana Farmers, said they are already manufacturing banana crisps which they sell to shops and supermarkets.

Paul Kiambi, from Icobo, a company formed by banana farmers in Imenti South, said they are producing banana flour, which is used as a food flavor.

"Our banana flour is used as a flavor for foods such as githeri, chapatti and porridge,” said Kiambi.

Parliament stares at dissolution as crucial Bills’ deadline draws near

Exactly 19 days into the 5th anniversary of promulgation of 2010 Constitution, Parliament is staring at yet another possibility of having to save itself from dissolution over failure to pass necessary laws.

By Winfrey Owino | 33 minutes ago