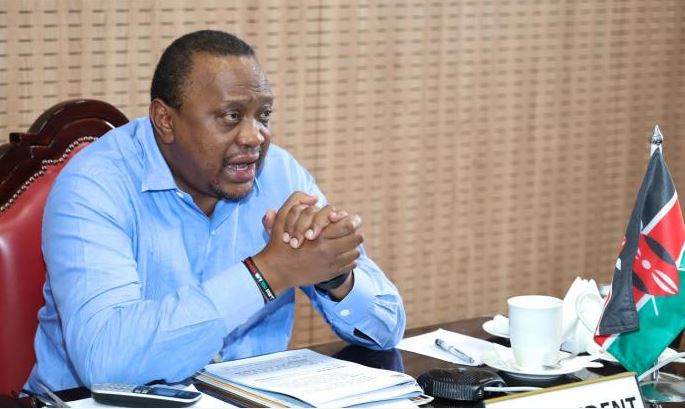 President Uhuru Kenyatta (pictured) is caught in the throes of a new power struggle that not only threatens his unity pact with ODM leader Raila Odinga, but has also stalled a formula to guide the allocation of funds to the counties.

Intense backroom wrangles have resulted in the dramatic withdrawal of a report of the Standing Committee on Finance and Budget on the third basis for revenue allocation among the county governments.

Without the formula recommended by the Commission on Revenue Allocation (CRA) in force, the Senate cannot enact the County Allocation of Revenue Act, which will stipulate how the 47 counties will share out Sh316.5 billion this financial year.

Sources said at the centre of the controversy is a push by ODM stalwarts to get President Kenyatta to make Cabinet changes and accommodate a number of their nominees, as well as appointments to parastatal and ambassadorial positions.

There is a feeling among Raila’s supporters that while his handshake with the President has handed the Head of State new allies to help him quell a rebellion in Jubilee from a faction allied to Deputy President William Ruto, it has done little that benefits Raila’s camp.

Some in ODM are concerned that if they do not have their way this time as part of the county cash negotiations, it will be a chance lost to secure positions before the next General Election, according to multiple interviews with party insiders.

Others argue that Wiper Party Kalonzo Musyoka’s direct engagement with Jubilee outside the NASA structure has weakened ODM’s position with the ruling party hence the need to flex its muscles.

The demands of ODM have inadvertently converged with the interests of Tangatanga senators who are still smarting after being purged from parliamentary committees. The DP’s allies are seeking to kill two birds with one stone even though counties in the Rift Valley are among the biggest beneficiaries of the proposed method to split county cash.

When Ruto men like Elgeyo Marakwet Senator Kipchumba Murkomen speak out in public against the formula, it creates the impression they are sympathising with the losing counties, which are mostly in the coastal, arid and semi-arid regions that the DP is courting to shore up his presidential bid.

A defeat of the formula, however, will be a victory for the Tangatanga wing because it will allow them to get back at Uhuru’s camp. But more importantly, it will help them demonstrate that the President’s new allies cannot be trusted.

“ODM is playing us. They are playing political games with the committee proposals on the CRA recommendation. They are demanding for slots in government before they can approve. They want Cabinet slots, ambassadorships and parastatal chairpersons. They are also not happy with Kalonzo’s new dalliance with Jubilee,” said a Jubilee leader who requested anonymity because he was not authorised to speak to the media on behalf of the party.

The stalemate forced Senate Majority Leader Samuel Poghisio to shelve debate on the formula, the second time in a week and the fifth in a row, underlining the intrigues playing out behind closed doors.

Mr Poghisio captured the technical dilemma facing the House. “It is true that some people don’t want new statistics to be used on this matter. There are some populations that have since decreased and others increased marginally. Services are to people and populations, and we need to be fair so that those who depend on land do not oppress those who depend on population.

“We have a lot of things to look at like roads, urbanisation and health. It is not easy to reach a compromise. I have no issues with the CRA formula, either, but we need to stop the politics and think about the people.”

Kirinyaga Senator Charles Kibiru, who is also the Finance and Budget Committee chairman, said, “As a Senate we have a constitutional duty and a time has come to review the formula. In reviewing the formula, we need to ensure equity when we follow the principal that resources follow functions. It means that resources are deployed for Wanjiku, Atieno and others. We must therefore ensure that, as much as is practically possible, we ensure equity.”

He continued: “Under the committee proposal, Nandi will get less than Sh7 billion and Mandera will get close to Sh9 billion. That takes care of the equity question. We are not giving money to Mt Kenya Forest or the Maasai Mara. It is about service delivery to the people. We must consider the topology of counties and distances travelled to access services. We proposed to use the radius of the counties.”

“The spirit of devolution was to provide equitable distribution. Under the absorption rate, services are needed by people, not land or trees. What are we doing about the urban poor? It doesn’t make sense to give the same to Kiambu and Mandera. The proposal by the committee should be adopted as it is. Let us give it the necessary support for an equitable Kenya. The principal should be one man, one vote, one shilling,” said Mr Cherargei.

Yesterday, Senate Minority Whip Mutula Kilonzo Jnr said the unprocedural adjournment of Tuesday’s sitting was enough evidence of undue influence on the Senate over the matter.

“The proceedings of Tuesday are prima facie evidence of high stakes in the process,” said Mutula.

When probed further on who could be trying to influence the House on the revenue-sharing formula, he said discussing the issue “would risk collapsing the delicate ongoing discussions.”

“I would rather we don’t discuss the matter because we are not done yet. It will jeopardise a very delicate matter to the detriment of great good.”

“The conduct of the Speaker today is unbecoming. I am prepared to lose my position as a whip of this Senate, but I cannot stand that sort of thing because it is a mockery of the discussions we have had.

“We are suspecting he is being influenced by people outside this House. This is a matter that we will not allow outside influence. We know of people who are peddling names of the Executive,” said Mutula.

Nairobi Senator Johnson Sakaja, however, has different views from most of his Jubilee counterparts. He proposes that the second basis for revenue sharing formula is retained and if additional funds are available then the funds are applied under the committee-proposed formula.

“No county should get less than what they got last year. For Sh316.5 billion and below, we use the old formula. Anything more, we use a different formula. If the majority agree, we proceed that way. If not, we fall back to the committee position.

“Populations don’t just shrink; the cost of delivering healthcare in Ongata Rongai and Kajiado South is different. But they all deserve service delivery. You cannot have cohesion without equitable distribution of resources,” said Sakaja.

Last Tuesday, Orengo tasked Sakaja and Mutula to come up with a compromise formula. The two lawmakers proposed that last year’s formula should be retained to share out the Sh316 billion. However, any amount above this should be distributed using the committee formula.

This proposal was accepted by senators from counties that would lose under the committee formula, but rejected by their colleagues.

Their approach was also criticised for using old census data, which would have meant allocating funds for one million non-existent people.

“The Sakaja/Mutula proposal does not make sense for the reason that there is no more money beyond Sh316.5 billion going to the counties. That means some counties where populations have shrunk or the poverty index has improved will be getting money for people/reasons that don’t exist,” said Poghisio.

Kitui Senator Enoch Wambua urged the State to be honest if it was committed to increasing allocations without counties losing funds. “The proposal on the table is a contradiction of what Jubilee is saying. It proposes that the baseline be maintained at Sh316.5 billion and any addition over the years be pegged on the new formula and parameters.”

Kisumu Senator Fred Outa said he will support the formula that gives more money to his county.

“This was very straightforward. For me in Kisumu, how can I return money when our people are suffering? We need more money in Kisumu. There are people who have gained but they would rather play politics.”

Beyond the political controversies are different revenue-sharing formulas before the Senate. Each formula has winners and losers hence the different positions taken by leaders

The Senate committee considering the reports, however, felt that the issue of per capita allocation was not appropriately addressed. Per capita income measures the total income of every person in a given area in any year.

Lamu, for instance, would receive Sh24,000 per capita while Nairobi and Mombasa were allocated Sh3,000 per capita. This disparity elicited fierce debate and widened divisions in the Senate.

The second issue concerned land. Based on the CRA formula, 10 counties would receive 70 per cent of the entire allocations based on their landmass.

The committee proposed a ‘square root’ formula to try and bridge the gap. Instead of calculating the perimeter of a region, the team opted to work with the distance across each county.

But whichever formula carries the day, counties like Mandera, Wajir and Turkana are bound to lose based on census data that shows their population has shrunk.

Mombasa, Narok and Kilifi will lose owing to fiscal effort, which is the amount of revenue that county governments collect directly. Others will lose because their poverty index has improved.

The CRA had initially proposed an allocation of Sh335 billion while the committee proposed Sh325 billion. The President subsequently met with governors and agreed to fix it at Sh316 billion.

The Building Bridges Initiative also proposes that revenue allocated to counties be increased from the current 15 per cent of the audited accounts of government to 35 per cent. This means that funds would increase two-fold if the initiative is passed by citizens.

By Kelvin Karani | 4 hours ago