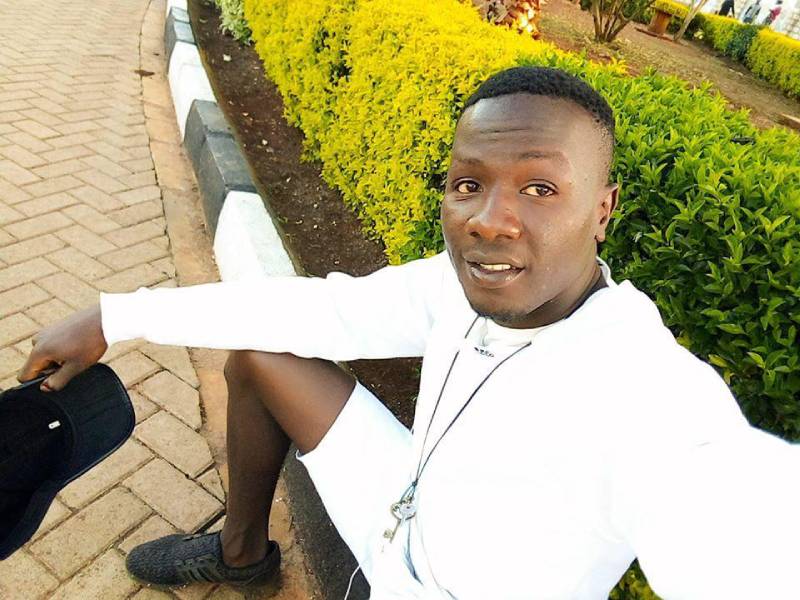 A gang shot dead a university student during a macabre robbery mission at a hospital in Umoja, Nairobi.

Rodgers Opiyo (pictured), 22, and a fourth-year student at Meru University was at the Phadam Medicare Hospital on Wednesday at about 7.30 pm to buy medicine for his ailing mother when the incident happened. The mother has been suffering from ulcers, according to the family.

Police and witnesses said the gang shot him in the neck after he identified them as being his friends in the neighbourhood.

The doctor on duty said the gang came in posing as customers seeking services at the reception and their main pharmacy before they turned out to be thugs. They then ordered all those who were present to lie down and surrender all their valuables and cash.

It was during the robbery mission that Rodgers identified them and questioned one of them why they were stealing from him.

Without any response the gunman pulled the trigger killing him on the spot. This sent panic among those who were being robbed. They included the doctor on duty, guards, receptionist and two other customers.

After the shooting, the gang ran out with their loot.

Police arrived at the scene moments later but the gang had escaped.

Buruburu police boss Adamson Bungei said a hunt on the gunmen is ongoing.

“There will be justice to this incident. Efforts to arrest the gang is ongoing,” he said.

He added the deceased was killed because he identified the attackers not knowing they would shoot him in reaction.

Bungei said the student had gone to the hospital chemist to get medicine for his ailing mother.

“He called one of the suspects by his name prompting anger and shooting. This happened as they were robbing those lying on the floor,” said Bungei.

Elsewhere, a man was shot in the stomach and robbed of Sh350,000 in Kariobangi. The victim was taking the money to a bank when he was confronted by a two thugs on a motorcycle.

Witnesses and police said the man resisted an order to surrender the cash prompting the gang to shoot him in the stomach.

The gang grabbed the cash and sped off.

The victim was rushed to hospital where he is admitted in a stable condition.

With many businesses remaining closed, criminals are now turning on essential businesses which remain open throughout the night.

In reality, resilience can be a competitive advantage and a means of maintaining and pursuing countries ' agendas.