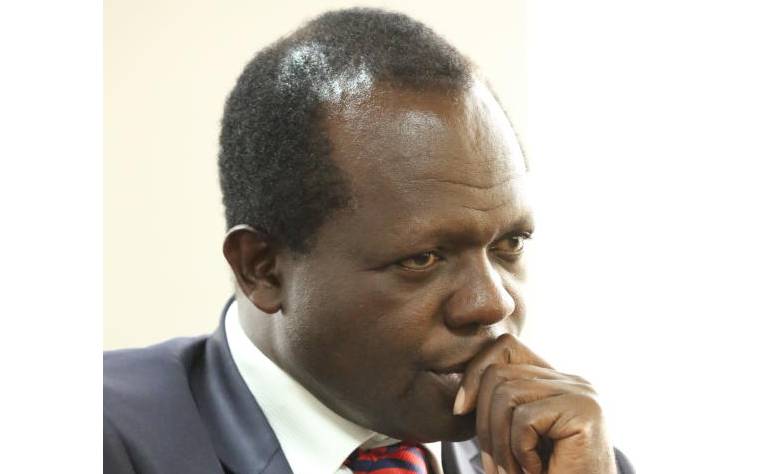 Jubilee Party Secretary-General Raphael Tuju (above) yesterday failed to block a bank from seizing his assets over a Sh1.5 billion loan.

The High Court verdict has paved the way for the seizure of Mr Tuju’s assets by the East Africa Development Bank (EADB) for the loan advanced to his company, Dari Limited.

Tuju moved to the High Court after a United Kingdom court ruled in favour of EADB. Tuju and EADB had agreed that they would settle any dispute over the loan before an English court.

But Tuju argued that the ruling by the UK court deputy judge Daniel Toledano could not be enforced in Kenya, as he was not given a fair chance in the English court to challenge EADB’s claim.

High Court judge Wilfrida Okwany dismissed Tuju’s argument, saying the politician had an opportunity before the UK Court of Appeal, but which he lost.

Justice Okwany said Tuju’s prayers amounted to asking the Kenyan court to sit on appeal of the UK court.

She observed that her role after the judgment was ceremonial - to just validate the ruling’s enforcement in the country.

“The jurisdiction of the court is limited to the enforcement of the foreign judgment. Any further challenge to the finding of the UK court can only be determined by the English court. The order of the UK court cannot be impeached by this court,” the judge ruled.

She, however, allowed Tuju to appeal her decision. According to court documents, Dari borrowed Sh900 million in 2015 to purchase a property known as Tree Lane in Nairobi.

The former Rarieda MP agreed to use titles of his expansive parcel in Karen as security.

In the UK court, Tuju explained that there was a Phase Two of the project, which would involve raising additional financing. The court heard that it was understood the loan advanced to Dari would be paid through the second phase project. But Justice Toledano found that the agreement between the parties did not say anything about a two-phase project.

“I have been referred to the minutes of the board meetings which resolutions were passed approving the loan arrangements. There is no reference in those documents to the alleged representation concerning Phase Two,” Toledano ruled.

He added: “Indeed, it was accepted by Defendant Two in his letter dated May 20, 2016 that the bank “remained silent” on the Phase Two lending. I, therefore, conclude that this head of defence does not provide any arguable basis for a defence either.”

The judge ruled that the bank was under no obligation to provide Sh294 million for the second phase of the project.

EADB, through its lawyers Githu Muigai, Michael Sullivan and former Uganda solicitor General Peter Kabatsi, argued that its interest was to recover its debt, which had not been paid to date.

In the UK court, EABD argued that Dari defaulted on its obligation. The court heard that nothing was paid despite the demand.

“The claimant (EADB) commenced the action and seeks to recover by way of summary judgment the sums under the terms of facility agreement. As at the date of hearing, that sum is $15 million dollars (Sh1.5 billion),” EADB told UK court.

Tuju told the court that the bank was holding titles of 27 acres of land as security. He argued that if Dari was put under receivership, its operations would be affected.

His lawyers Paul Muite, Paul Nyamodi, and Bridgitte Ndong argued that EADB was to provide Sh294 million for construction but it kept shifting goalposts, which in turn frustrated efforts to effectively run the project.

“The proceeds of the sale of the facility, services, and the spa would be a source of revenue to repay the amount borrowed. The respondents did not dispense the funds as had been agreed upon. They only gave money for the first phase,” argued Nyamodi.