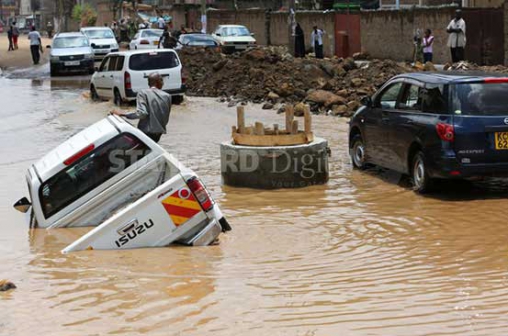 At least four people lost their lives on Friday evening after a perimeter wall collapsed at 5pm along Lenana Road, Nairobi due to heavy rains.

Kilimani OCPD Peter Katam who confirmed the incident said the deceased persons were taking shelter, before they met the untimely death. The four included one adult female and three men.

"The four people were sheltering from the heavy rains which started at around the better part of Friday afternoon. We urge motorists and city residents to be cautious," said Kattam

Kattam said Bunyala Road was also among city roads that were affected by floods. He urged users of the affected roads to be cautious.

As a result, Lenana Road at Department of Defense (DOD) and Russian embassy road was closed. This caused a major traffic jam especially for vehicles plying along the route.

Nairobi Traffic boss Leonard Katana told The Standard that the roads that were impassable as a result of the heavy downpour that started at 4pm include Uhuru Highway, Ojijo Road, Bunyala Road, Jogoo Road, Jakaya Kikwete Road, Valley Road near DOD and Milimani Road.

Motorists spend long hours in traffic jam, as others stayed in offices for long hours waiting for the rains to cease before they proceed to their homes.

This happened just a day after a heavy downpour on Thursday afternoon which left city dwellers stranded.

A video circulating on social media of a woman escaping from a matatu stuck in a flooded road in Industrial area caused a stir with social media users calling upon Nairobi County government to put in place measures to curb the situation.

The woman is seen escaping through the window of a public service vehicle and assisted by cart pushers to cross the flooded road.

The flash floods made it difficult for motorists to get around. Some of the motorists were forced to abandon their vehicles on the road in places where the floods were immense.

Haron Ochenge, a boda boda operator at Garden estate, in Kiambu road said the heavy rains caused great losses to motorists as their cars plunged into ditches beside the flooded road.

"Two vehicles fell into a ditch last night and we had to remove it this morning after the floods subsided. Our work yesterday when the heavy rains started was to direct vehicles along the flooded road," said Ochenge.

Stephen Kabure, who resides along Thika Road decried that the heavy rains caused mayhem in the city adding that if the rains continue to impound the city, more serious damages will be recorded. He called upon the county government to put measures in place to prevent such occurrences from happening.

The heavy rains came with massive losses with rooftops of businesses in places like Eastlands being blown away and trees falling on roads and electric poles causing blackouts.

At Kencom stage in Nairobi, a section of Kenyans made a kill from it as they charged Sh50 to carry people across the flooded road.

Heavy rainstorms caused power interruption in most parts of Nairobi. The rains that started late in the afternoon have interrupted electricity supply and distribution systems in parts of the city.

Customers affected include those residing in Eastlands, Umoja, Donholm, Komarock, the lower side of the CBD, Riverside drive and surrounding areas.

David Njaaga, a photographer with The Standard Newspaper and lives in Donholm said he arrived at his home at 11pm after spending several hours in traffic jam.

"The heavy downpour caused traffic jam with several personal vehicles abandoned at the road as a result of the floods," said Njaaga.

Kenya power released a statement calling upon the affected customers to be patient.

The offending video featured three young players including James Pearson, son of then manager Nigel Pearson, engaging in explicit acts with group of Thai women in a Bangkok hotel.