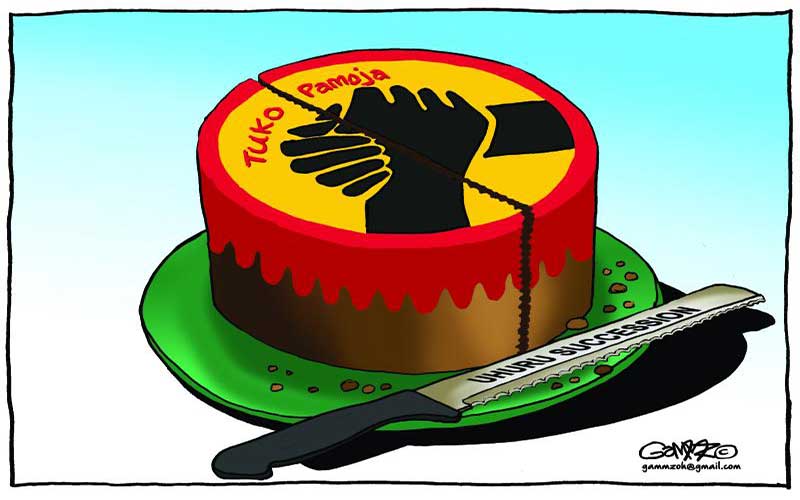 When I joined primary school, one of the most exciting moments for me was when the bell rang for lunch. Those days, lower primary pupils stayed in school until midday. Then a chorus of Nasikia sauti, sauti ya mama… sasa ni saa sita kwaheri mwalimu a popular nursery rhyme.

We never even waited for the teacher to release us. Since we were hungry, the only thing on our minds was the dusty 3-km distance to home before we joined our parents for lunch and that was the end of the school for the day. Human beings generally look forward to the reward they get from the end of any particular activity.

In politics, the same happens. During the period of transition like now, a president serving his final term, the bureaucrats in the administration position themselves on the gravy train by influencing what the president can hear and therefore determining the action and decision he takes as the clocks ticks away.

Not just that, very often, it is easy to manipulate and take part in the frenzy of looting and plundering that ensues.

The focus is shifting as the angst from the uncertainties that follow the exit of the big man or woman takes hold.

As the reign of President Daniel arap Moi came to an end, it is claimed that the “Deep State” had already positioned themselves to start influencing him on who he could anoint as his successor. Considering the power and the intimate relationship with the Civil Service - and even the military- the former president wielded, it was widely assumed his choice for president would most likely get elected.

His choice then, Uhuru Kenyatta came a distant second to Mwai Kibaki in the 2002 presidential election. As Kibaki’s 10-year term ended in 2013, the obvious pull and push among the Deep State was display. Some of the powerful men in Kibaki’s government had a preference for Musalia Mudavadi while others preferred Uhuru Kenyatta.

At some point, Uhuru Kenyatta gave in and decided to support Musalia Mudavadi only to change his mind again after making the “Sheitani” claims. But it was not a secret that top members of President Kibaki’s government never agreed on who to pass the mantle of leadership to. But in between, there were reports of widespread looting of State coffers. A good example is the misuse of funds at the Ministry of Interior where reportedly billions of shillings were misappropriated. In the subsequent fallout, State officials started blaming and exposing each other.

We are back again to the same place as the 2022 succession hots up. Uhuru Kenyatta’s term will end in two years and already, the ruling Jubilee Party is in complete disarray. Yet this is not strange because political pacts have never lasted beyond the term of a sitting president since multi-party politics was reintroduced in 1992. In the last 20 years, every new president has been elected on a new political outfit- party or coalition.

That the next president of Kenya will not be elected on the Jubilee party is almost a foregone conclusion: Not only has Deputy President William Ruto fallen out with President Uhuru Kenyatta, within the President’s side of Jubilee, cracks are forming.

For example, there is more than meets the eye on the hullabaloo over the second round of Huduma Namba. It is not just news about another scandal in the cooking. Just like the media expose on the COVID-19 corruption scandals, someone inside is trying to kick the legs of the Jubilee stool.

Some of the information about the Huduma Namba II were so detailed. Such privileged and (probably classified) information could only have been leaked by people in the know within the system. Such sibling rivalry is very common during the period of transition and probably this circus is likely to continue even more. Expect more dirty linen to be aired in public.

Buy your packet of popcorn and watch the movie unfold in the days to come.

The danger of all these is that Jubilee (and the handshake coalition) risks forgetting who the real enemy is. Which is sweet music to the ears of the Hustler Nation.