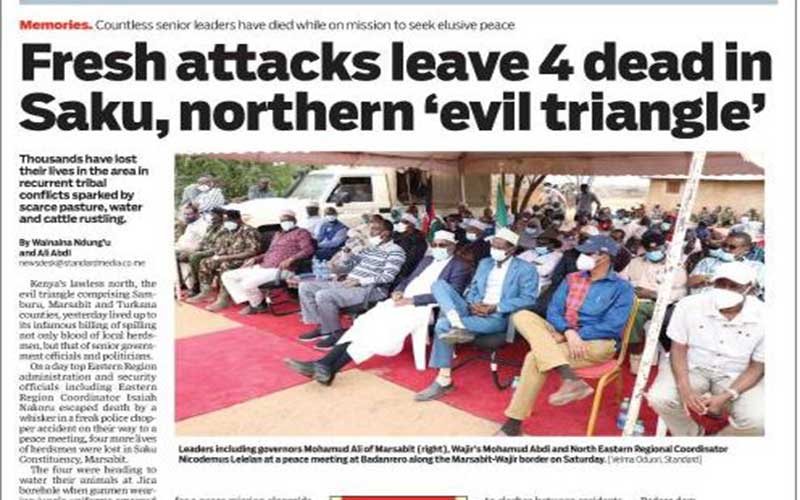 Ethnic violence has once again reared its ugly head in our country.

Marsabit County was the site of the latest violence with four civilians recently killed in a territorial dispute over grazing land and watering holes. The four, including two university students, aged 17 to 25, were ambushed by gunmen at the Badasa Water Point and killed.

Although the reason for their death is not yet known and investigation is not complete, their killing is thought to have been politically motivated.

Kenyans are sadly no strangers to ethnic violence. Those of us old enough vividly recall the 2007-2008 clashes, which resulted in hundreds of dead and according to some counts, hundreds of thousands of internally displaced citizens.

The relative peace and security we enjoy today did not occur in a vacuum. It has been the product of a prolonged process of building national unity, most strongly encouraged by our current President, one of the strongest proponents of unity our country has known.

Unity was very prominently emphasised by President Uhuru Kenyatta in his address to the nation, welcoming in the year 2020. According to his speech, “In the year 2020, we will continue to make Kenya a better Nation for all her people as we build bridges of brotherhood among our peoples by weaving a stronger fabric of patriotism and nationhood”.

Striving together to achieve unity has featured so high on our national agenda, both due to the important role it plays in building our nation’s and in seeking to prevent tragedies such as the ones recently witnessed in Marsabit County.

Our President’s call for unity has so far been heeded by many across the nation. Together we have successfully overcome challenges that had the potential to sow tremendous national division.

As Uhuru rightfully asked in a speech late last year, “Why is it after every five years Kenyans must fight each other, we must shed blood, destroy properties, business to come to a halt and fear engulf our people?”

Issues which could have easily led to upsurges in violence include addressing the delicate process of constitutional reform and the current conversation taking place regarding the institution of a mixed cabinet, as well as restoring the post of Prime Minister.

Our ability to have these conversations without instigating widespread violence would have been impossible had the ultimate importance of unity not been emphasised over the past seven years.

The quest to unite our nation has not been an easy one. Instead of simply calling for this, one of the primary tools which Uhuru has made use of has been setting in motion projects that unite the nation and help guide our national aspirations. The Building Bridges Initiative (BBI), was one such project. With a task force formed in March 2018, immediately following the famed handshake between Uhuru and Raila Odinga, the BBI has sought to create an inclusive mechanism for guiding the political future of our country.

Looking beyond politics and towards our national development agenda, our president’s Big Four agenda alongside ambitious Vision 2030 have also facilitated unity. These have shown that no matter what tribe or socio-economic background one is from, common guiding principles can be found. A strong economy, affordable housing and universal healthcare are things that every Kenyan would benefit from. Placing them as guiding principles on our national agenda has assisted in creating policy that every citizen can and should throw their weight behind.

2020 will forever be remembered as the year of the Covid-19 pandemic. Facing the virus together however, has helped show the futility of investing resources in sowing ethnic divisions. Although some politicians use this as a tool to promote their own agenda, when crisis strikes, we realise how much we need each other. We are all equally threatened by the danger of the silent enemy currently facing us. More importantly, we cannot expect to defeat it without presenting a unified front.

The emphasis Uhuru has placed on unity has shown us that this indeed, is the only way forward. Those that break away from this common goal and instead encourage hatred will learn the hard way how futile their efforts are.

Our nation has placed tribal divisions in its past. We understand that we are stronger together. Our message to the perpetrators of the recent atrocities in Marsabit County must be loud and clear; there is no longer room for such violence in our country.

Some patients demand bhang, miraa and alcohol, which cannot be found at the centre.