BBI glosses over the past and paints rosy picture about future 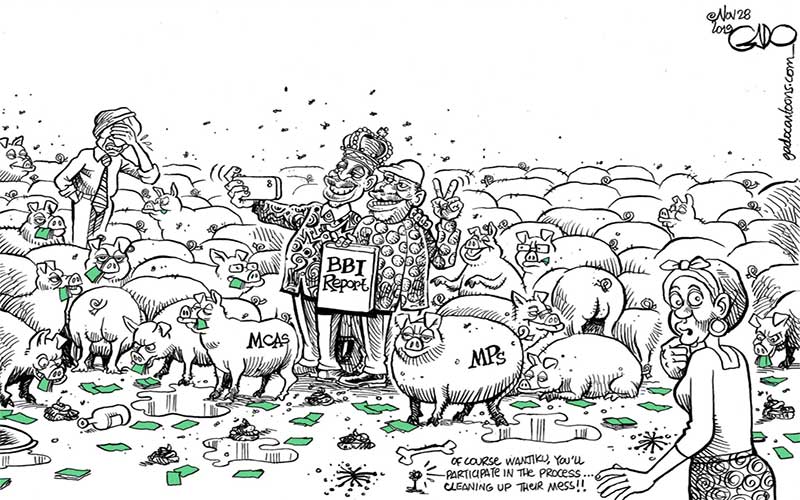 For months, talk has been about the imminent release of the Building Bridges Initiative report. The wait was not so much in anticipation as resignation that the launch would be a colourful, expensive extravaganza while the report itself would soon be forgotten and probably never be implemented. Get it over with, have your bash and let us get on with our lives is the most frequent response.

When Kenyans become cynical about such task forces, who could really blame them? Just recall the fate of the Ndung’u, TJRC, Kriegler and Waki reports, and several more, and you have the answer. The nation is totally exhausted and suffering ‘report fatigue’ and the predictable promise of a new dawn, a fresh beginning. Yet it is the same old, familiar and tired faces who sign the reports that they have neither the intention nor the energy to implement. What did Jesus say about new wine in old wineskins!

Rather than watch live coverage of the spectacle, I spent Tuesday with my Haki Yetu colleagues in Kilifi launching a civic education and action programme on the Constitution. At the grassroots level, the demand is for implementation of the Constitution, not for amending it. Devolution is working even if disbursements are delayed and irregular.

What is most apparent however is that there is a clear disconnect between the political manoeuvres that dominate the airwaves and the reality of everyday existence of the majority of the population. For example, while the elites were celebrating at Bomas, the whole of West Pokot was mourning over the landslides that wreaked havoc on them last weekend. One would have expected that the Bomas launch might have been postponed for a few days while the North Rift came to grips with the loss of up to one hundred of its people and thousands others made homeless. Instead, as always the political show took precedence. Perhaps if West Pokot were within 50km of Nairobi and not 500km it would get the attention that it needs and deserves.

While KDF appear to be using their resources to bring relief to the victims, the reality is that hundreds are still at risk of dying of starvation and pneumonia. But this tragic affair illustrates how little the poor, those at the bottom of the pile, far away from tarred roads and surviving on dangerous hilltops matter in the hierarchy of things. Communities in West Pokot, Turkana, Samburu, Wajir, Tana River and elsewhere have been marginalised for so long that their counties are viewed as another Kenya. That may in part be the legacy of colonialism where the Northern Frontier Districts were forbidden territories and the green gates erected by the settlers became barriers and borders.

But 56 years of independence and a whole decade of devolution should not just change infrastructure but mindsets. If the BBI is about uniting Kenyans, then it should begin by treating all of them equally. Pokots are not lesser Kenyans and what happened to those unfortunate people should be declared a national disaster. Ethnicity only emerges as an issue when some communities are excluded and deprived of their share of the nation’s resources. We cannot blame authorities for what has happened but they can be faulted if the national response is inadequate and half-hearted.

The BBI fails to address the historical land and resource injustices that have impoverished the Pokot and other communities for decades. It glosses over the past and paints a rosy picture about the nation’s future. What little is said about the national epidemic of corruption just indicates that the authors of this report are afraid to ruffle the feathers of the godfathers who appointed them. Had they been honest, they would have acknowledged the state capture that is at the root of the problem and the report is clearly designed to maintain the status quo. But the chickens are coming home to roost very soon. When 60 per cent of the GDP is going to service suspicious loans, what will remain to build the bridges and lives of West Pokot?

We are informed that the dialogue will resume in January. Let them continue talking but let it be on how to put more food on the table, more children in schools, more youth in employment and more mega thieves in prison. Maybe then we will view BBI as a worthwhile exercise and not a distraction meant to preoccupy us while they continue to loot.

By Mukurima Muriuki | 9 days ago