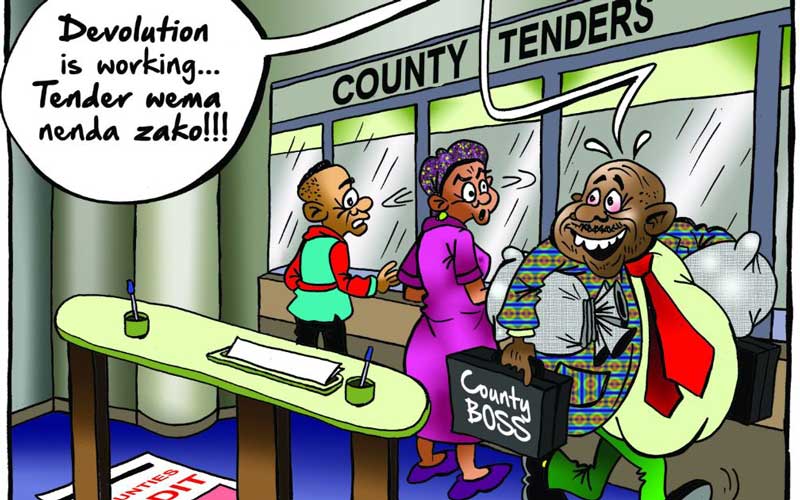 Defending the gains of the 2010 Constitutions is an obligation we owe our children and our children’s children. While the Constitution gave a strong case for political separation as well as decentralisation of power, devolution was meant to take resources to the grassroots. The debate on the relationship between the national and regional governments within a state has existed in many democracies around the world. In all these debate, the question as to whether two sovereignties co-exist within a state and what the limits of power should the sub units have, has always been the cause of divergence of opinion.

In 1787 Alexander Hamilton, an American statesman, strongly championed for stronger national government with the assertion that stronger economies can only be built by placing all responsibility on national government. The sovereignty of the people as articulated by Kenya’s Constitution 2010 articulates that all sovereign power belongs to the people and that power can be exercised at either national and county level either directly or through democratically elected representatives. The introduction of the county level governments has brought out a tug of war on the legislative as well as executive powers and limits of the sub units.

Accepting the goal of a strong and unfettered national government on one hand and a continued role for the states on the other hand, the struggle to find a balance. A stronger usurpation of powers of the county governments. There is need for national dialogue to come up with a nationally agreed upon mechanism for decentralising the fiscal architecture. Drawing on the principles of autonomy, accountability, objective focus, effort and service, the architecture needs to comprehensively and conclusively deal with the issues of multi-level revenue collections detailing the tax distribution, multi-level cash transfers and external funding.

While the Constitution 2010 obligates the national government to ensure equitable distribution of resources to the counties, there is need to ensure the disbursed funds achieve not only the trickle-down effect of resources but also empower the counties to expand the national cake. This could be done by innovatively diversifying the county governments’ tax regime from the property tax to other taxes. A discussion around decentralisation of the Kenya Revenue Authority would enable the devolved units take control of such taxes as local consumption tax, local tobacco tax, light oil delivery tax, automobile acquisition tax, golf course utilisation tax, bathing tax, automobile tax, light Vehicle tax, mineral products tax, hunting tax, local manufacturing tax and local vehicle registration tax.

It is important to note that this kind of intervention must go hand in hand with cost cutting measures to avoid unnecessary wastes. Cognizant of the fact this kind of intervention may affect counties whose economic development of the status is low, the disparity could be levelled through equalisation fund whose annual disbursement must be pegged on evaluation of annual impact in terms of economic effort ascent as well as an increase in management efficiency.

Expanding external funding for counties: one of the key significance of counties is their ability to provide a well-structured, customised trickle-down effect of development as well as resources. The counties should look beyond the national government and be able to negotiate for financial partnerships with the sub states in other countries. Such partnership could range from financial, equipment donation, skill development, technological transfer or knowledge sharing. The national government could create a mechanism for accounting for external donation and mechanism for starting such discussions.

Conditional grants; these already exist as restricted grants or cash transfers to counties. Their purpose must be well defined and evaluation framework well laid down to avoid misuse of funds. The audit of the operation of the Integrated Financial Management Information System (IFMIS) is necessary and a matter of urgency because it found out that the misuse of funds at the devolved units may be as a result of the mechanical nature of the system.

All these ideas can only be achieved if we lay out a strong accountability framework to hold the leaders at the counties accountable for the resources in their hands.

This accountability must come from the institutions established by the Constitution to safeguard public funds, the civil society organisations at the local level, the media and active, informed citizenry.

These bodies acting as individuals or in concert could play a big role in cushioning the counties from political fights between the executive and the elected leaders.

- Dr Churchill Saoke is the Director for Alumni and International Students’ Office in JKUAT.  [email protected]

Being smart is not enough

Dr Alex Awiti, Vice Provost East Africa and the Interim Dean of The Graduate School of Media and Communications at The Aga Khan University