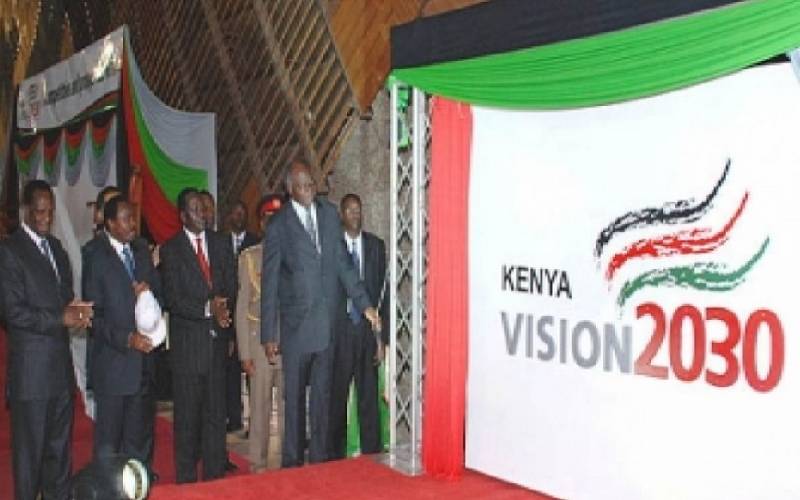 On October 30, 2006 when Vision 2030 was launched, the dream to transform Kenya into an industrialised and prosperous nation with a high quality of life  appeared realistic to many Kenyans. However, today many Kenyans are sceptical that this vision will be achieved by the set date. This may not be surprising since, as a country, we have been on target to achieve the vision.

In order to become a middle-income country, for instance, our economy is supposed to be growing at a minimum of 10 per cent per annum from the year 2012 to 2030. Several factors have contributed to this less than desirable, performance including political instability, especially the 2007/8 post-election violence; unending political campaigns; institutionalisation of corruption where the number of scandals and the quantity of money misappropriated have both increased dramatically; lack of synergy among different government arms involved in the implementation of the successive five-year medium term plans, among others.

While the major responsibility regarding the achievement of Vision 2030 lies with the Government, Kenyans have a responsibility in making this vision a reality. We cannot afford to sit back and expect the Government to do everything. Accordingly, we can contribute to the realisation of this vision in many forms, including the deployment of both material and non-material resources. In fact, a key non-material resource that has often been overlooked is volunteerism. Volunteerism, which can be defined as the “donation of time and/or expertise without expecting monetary rewards”, is not something new in Kenya. It existed before, during and after the colonial era.

Volunteerism in Kenya is thought to be driven by a combination of cultural and religious values. Culturally, Kenyans tend to be collective oriented, and hence communitarian values such as mutual aid, kinship care, and solidarity play an important role in their day-to-day lives. As a result, Kenyans volunteer their time and/or expertise to help fellow citizens. From a religious standpoint, it is a truism that Islam, Christianity, Hinduism and African beliefs encourage their adherents to engage in voluntary activities in order to alleviate human suffering.

Nonetheless, today it can be argued the influence that culture and religion have on Kenyans has been tempered relative to pre-modern Kenya, five to six decades ago. This phenomenon can be partly attributed to the intrusion of foreign cultures that are rooted in individualistic philosophy, where self-interest defines mostly the motives and behaviour of individuals, into our culture. In turn, volunteerism has been on a downward trajectory among Kenyans.

But it must be mentioned that at the moment, there is a renewed effort to promote volunteerism and social responsibility in general. The concept of corporate social responsibility (CSR), which originated from North America, has gained traction in Kenya. As a result, many multinational corporations as well as a sizeable number of locally owned large enterprises have integrated CSR into their core business activities.

Despite the rise in prominence of mainstream CSR, formal social responsibility is less ubiquitous in Kenya relative to traditional social responsibility. Hence, mainstream CSR has not filled the gap relating to the demand for voluntary services by community groups, non-profit organisations and government agencies. There is a need, therefore, to reinvigorate the Kenyan tradition of philanthropy, volunteerism in particular, which is grounded on our indigenous culture and religions in order to meet the needs of our communities.

Reinvigorating our communitarian values–of helping the poor and orphans, the sick and elderly—would play a major role in alleviating the suffering and enhancing the lives of our fellow citizens. Tapping optimally the resource of volunteerism, however, requires collaboration between different groups, including community leaders, NGOs, and government agencies. The point of departure for maximising the contributions of volunteerism is creating awareness on its importance in addressing societal issues and causes.

It is incumbent, therefore, upon every Kenyan to play a part by engaging in volunteerism for Kenya to become a “middle-income country providing a high quality life to all its citizens by 2030.”

We are expecting to get honey from flies under current leaders

Lack of special training to blame for Kenya’s lucklustre leadership.

By Mukurima Muriuki | 11 days ago