Referendum should be about economic viability, not political expediency 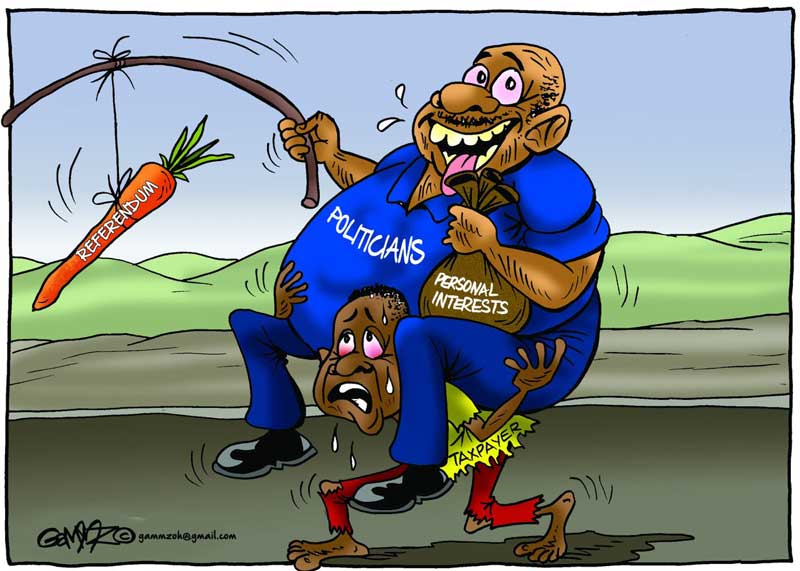 Kenyans never disappoint when it comes to forgetting pertinent issues and moving on to the next struggle. Already, they seem to have forgotten the ruined economy, corruption and a dysfunctional public service, and taken up the clamour for changing the Constitution.

In a state of resignation, and coming from the bruises of the 2007-2008 post-election violence, Kenyans made a mistake by hastily endorsing a half-baked constitution, probably out of fatigue in which one can only proclaim “bora uhai!” It is against this background that Kenya got a constitution it cannot afford.

The supreme law created a national government with 47 replicas across 47 counties, in full disregard of how these units would be sustained.

However, the problem started way before the enactment of the current Constitution. When Mwai Kibaki took over as President in 2002, he burned the midnight oil trying to prove that Daniel Moi was an inept megalomaniac who knew nothing about governance and public finance management.

During the Kibaki era, public service ballooned with the creation of new administrative districts and divisions, compete with the bureaucracy of provincial administration.

When the county government structure was implemented in 2013, the Kenyatta-Ruto administration decided to keep the provincial administration; never mind there was no longer any legal framework supporting it.

The debate to change the Constitution is good and healthy for Kenyans. It is an opportunity to critically examine whether Kenya, as currently structured, is a going concern. From an economic perspective, there is no justification why there should be county governments that cannot sustain themselves fiscally.

Today, less than 10 counties can collect enough revenue from within their borders to sustain operations. The rest wait upon the national government for transfers so they can afford to pay salaries.

The Committee of Experts that wrote the zero draft of the Constitution stands accused. The two-tier administrative structure that gave us the national and county governments is a clear copy-and-paste of the American system that has the Federal and State governments.

The Committee of Experts forgot to note that all State governments in the US are fiscally independent of the Federal government.

Kenyans should demand that any administrative unit that cannot sustain itself should not qualify as a stand-alone county government. In any case, if we were to follow the American system that was forced down our throats, the various states that make up the US did not qualify to join the Federal Government Union as full-fledged states all at the same time.

The first state to join was Delaware in 1638, followed by New Jersey in 1660 and Pennsylvania in 1682. These were the richest states back then. The last state to join the Union, Hawaii, was incorporated much later - in 1959 (321 years after Delaware) - when it proved it had what it takes to be a full-fledged state.

If we are to have a referendum, we should correct this anomaly by collapsing all county governments that do not make sense into fiscally sound amalgamations. Kenyans should insist that in the post-referendum scenario, each county should be a profit centre in every sense of economics.

As it is today, more than 40 counties are cost centres that only serve to burden taxpayers, who have to painfully fund the lifestyles of county princelings.

Perhaps, in the referendum, we should also insert a section that prevents the national government from wanton borrowing, and that compels it to seek permission from Kenyans before it commits to unreasonably extortionate debt.

That way, we might save ourselves from another phantom Eurobond situation.

Mr Karugu is a strategy and analytics consultant based in Nairobi; [email protected]

By Ismail Shirwac | 24 days ago