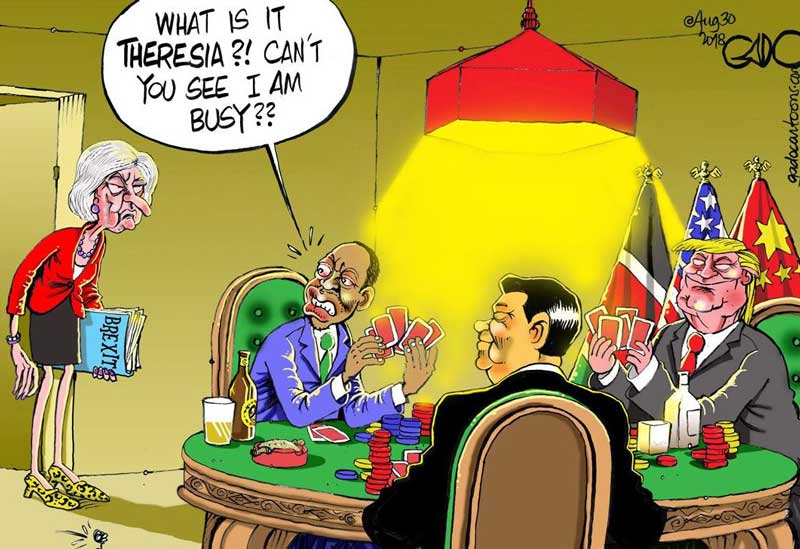 There appears to be big power competition for visible presence in Africa, each driven by two symbiotic forces that always stimulate a state when dealing with others. These are interest and fear. The interests are commercial/trade, socio-cultural, survival/security, and imperial/political. The primary interest in each state is protecting itself, its way of life, its identity.

Fear that other similar entities can and do threaten primary interests stimulates to engage in all sorts of activities as protective measures. They build institutions to promote generic peace and policing units to maintain the peace by handling perceived domestic threats to good order. When the perceived threat to interests is beyond the borders, the normal reaction is to build the military and related defence infrastructure.

The determinants of how a state promotes and protects its interests from both domestic and external threats is largely the work of leaders and how they perceive the threats and what they think should be the strategy for countering the threats. There are those who adopt imperialistic tendencies and go out to conquer others in order to access resources or deny those resources to perceived rivals.

Others become inward looking, try to cut ties with the outside as a way of self-protection by minimizing external influence. They at times combine imperialism, going out to extract resources from outside, and isolationism which means keeping other people out. At present, these things are happening as big powers go out mostly to Africa while tightening entry restrictions to their countries. They compete to secure interests or deny others access to resources in Africa. Fear of losing to rivals drives each to pay attention to Africa.

Fear was the stimulant for the scramble for Africa in the 1880s when Euro-powers met at Berlin to agree on how to grab African territories without killing each other. This time,the approach is different but intense. Fear of returning to damaging isolationism made China outward looking with its global Belt and Road Initiative.

Emmanuel Macron wants Xi to extend the Belt and Road Initiative to France and for the two powers to cooperate in Africa. Linking with China and penetrating “English” zones through such giants as Total and Carefour is a way of securing French interests in Africa. Both Macron and his German counterpart, Angela Merkel, fear Donald Trumps growing hostility toward Europe and NATO and seek to develop “independent” defense strategies.

NATO countries, having bombed Libya, now worry about the resulting migration to Europe. This explains the Merkel African tour in Senegal, Ghana, and Nigeria to promote trade and access to resources, and most important to talk about migration challenges. The coincidence of Merkel touring Africa at the same time as her British counterpart, Teresa May, shows the seriousness of the emerging big power rivalry in Africa.

Merkel and May visited Nigeria and talked trade and security and both, with BREXIT at the back of their minds, want to lure Africa to their sides. May was on an image mending mission, talked trade, security, and other types of collaboration within the Commonwealth in the light of BREXIT.  Uhuru reminded “Teresa” to visit Kenya more often instead of going for holidays to France and Italy. With BREXIT, Euro powers would not be as welcoming to her as Kenya would.

Teresa was in between two of Uhuru’s international engagements. He had returned from Washington where he met Donald Trump. Uhuru’s jokes about working with Mike Pompeo in his previous and current positions sent the cabinet at the White House into smiles.

Pompeo, virtually Uhuru’s age mate with a two year difference, took over as secretary of state after Trump fired Rex Tillerson in Nairobi. There were promises of investments and security collaboration and then Uhuru returned to Nairobi to receive “Teresa” before going to Beijing for Discussions with Xi Jinping and the FOCAC meeting.

Leaders of these global powers are competing for attention in Africa out of fear that their particular interests might lose to their rivals.

The challenge to African states is to tell the genuine from the fake attention. And then act appropriately.

What you should know about the tax you pay

Tax illiteracy is a disservice to all because it favours unfair taxes, lack of government’s accountability, tax avoidance or embezzlement