On the war on graft, right doesn’t matter, it is the success 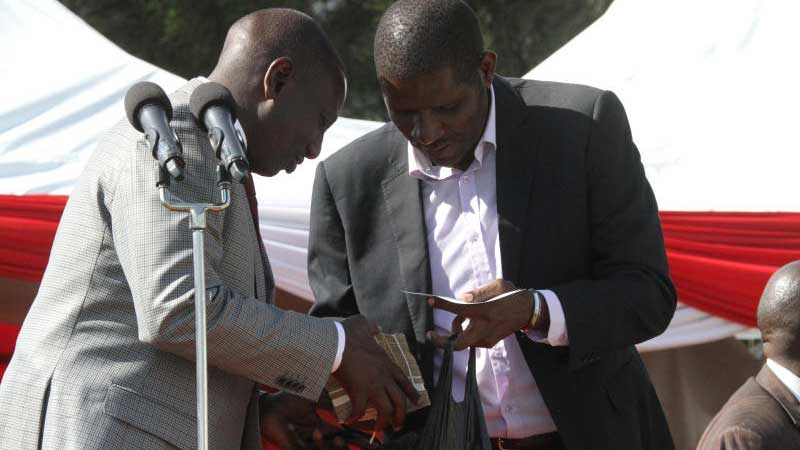 Deputy President William Ruto’s admission that no one owes anybody, including himself, anything is the greatest truth Kenya has ever been told in recent history.

Thank you Mr Deputy President for being a realist. The 2022 race is now for all practical purposes, an empty slate, a level playing ground for all Kenyans to consider, debate, bid and bet. Period. Now let us all direct all our energy and resources to the fight on corruption.

The war on corruption is being waged from the air, land and water. Minor battles have been won. The prosecution of the NYS suspects; the owner of Patel Dam; Governor Sospeter Ojaamong; Kenya Bureau of Standards top brass, among others could only mean that it is not business as usual. Meanwhile, public confidence in a clean government is slowly being restored.

While the ongoing vetting of heads of Procurement and Accounting Units is progressing well, the lifestyle audit is generating jitters especially in the Jubilee Party, but with proper handling, the desired effect will be achieved. Additionally, the seizure of contraband goods has generated some heat in Nairobi and for good reasons. At least those hellbent on selling poison to our people will think twice in future.

No doubt, the Multi-Agency Task Team (MATT) headed by the Attorney General Paul Kihara is doing a splendid job. Their mapping and ring-fencing of corruption hotspots is great. Their identification, marking out and swooping of their guests – the “Persons of Interest” seems flawless. And for that, the “War Council” needs support and prayers. The harvest is big, though the harvesters are few.

No Kenyan should feel left behind in the war to redeem our motherland from the scourge of corruption and its priests. Martin Luther King Jr once quipped:“Our lives begin to end the day we become silent about things that matter”.

If President Uhuru Kenyatta has promised not to spare his own blood brother in the war against corruption, who do you think you are? “When starting and waging a war, it is not right that matters, but victory,” said the proponent of the World War Two, Adolf Hitler in 1939.

President Uhuru Kenyatta obviously takes cognizance of the fact that the war on corruption is war – a conventional war in deed and character. Corruption will fight back and viciously. The need for discreet preparation, planning execution and mopping up is more demanding than ever. To succeed, the three Arms of Government must be ring- fenced, revamped and adequately resourced. The Executive Arm in my view is doing well only that they need the resources and enabling legislation.

The Legislative Arm must be brought along through constant consultation and motivation to sit for long hours as they investigate and legislate on the grey areas and seal the legal loopholes in law. The Judiciary must be given the tools (software and hardware as well as the goodwill that will enable them to slay the dragon of corruption.

The tactic used by the German army to invade Poland during the Second World War known as Blitskrieg should be adapted. Blitzkrieg simply means “lightning war.” It involves swift, intense attacks that are aimed at destroying the enemy fast. It often includes bombing raids (public education).

Thus MATT must be devolved to the regions up to the villages to create a groundswell of anger against corruption. The “Nyumba Kumi Initiative” could be revamped to include the fight against corruption. Corruption teams from the lowest level (households) to the highest (Office of the President) and from across every sector and institution must be activated and unleashed on the evil forces. This is so that the culprits don’t hide in their communities and turn themselves into tribal martyrs.

The churches, synagogues, church crusades, mosques and clubs must be brought on board. Schools, colleges and universities must be involved. The media must be encouraged to expose and shame the corrupt.

Most importantly, the war on corruption must involve both the short-term and long-term war strategies. Short-term strategies include the arrest and prosecution of “persons of interest”, as well as lifestyle audits.

While pursuing the short-term measures, the lessons learned must be incorporated to form part of the long-term strategies which includes sealing the loopholes that allows corruption to thrive.

Finally, the war on corruption must be entrenched in the collective psyche of the nation. The British naturalist, Charles Darwin, in The Decent of Man of 1871 summed it up when he wrote that; “Man with all his noble qualities……. still bears in his bodily frame the indelible stamp of his lowly origin”.

Mr Chesang is a historian