Lessons from America on effective boycott and sabotage

By Julie Masiga | 4yrs ago

After at least a year of electioneering, there is one word that every politician should keep out of their mouth. That word is tribe. The negative ethnicity that has driven a wedge right through the heart of the Kenyan community has always been a problem, but our reckless and loud-mouthed leaders have turned it into a national crisis.

A disaster of unmanageable proportions. I feel sorry for the next president of this divided republic for he will face the impossible task of putting together what the ruling class has systematically put asunder. Good luck Mr President.

But as we contemplate an uncertain future, let’s take a moment to reflect on the past. On December 1, 1955, a young African American woman in Montgomery, Alabama, boarded a bus and took a seat.

She sat at the back of the bus because in 1955 America, black people were not allowed to mix with white people who sat in the front. That was the rule which was enforced under Montgomery’s segregation laws.

So by sitting at the back of the bus, Ms Parks was well within her rights. Everything was going as it should have done until some white passengers boarded, quickly filling up their designated area. At the end of it one white man was left standing. The driver saw what had happened and decided to do something about it.

The example of Ms Parks

“We were not disturbed until we reached the third stop,” Ms Parks told an interviewer years later. “At this point a few white people boarded the bus, and one white man was left standing. When the driver noticed him standing, he spoke to us and told us to let the man have the seat. Three other black passengers stood up. But the driver saw me still sitting there. He said would I stand up, and I said, ‘No, I will not.’ Then he said, ‘I’ll have you arrested.’ And I told him he could do that.”

Ms Parks was arrested and fined $14. Her single act of resistance galvanised the black leadership in Montgomery who had been looking for an incident to trigger the non-segregation movement.

On Sunday, December 4, 1955, the leaders announced a boycott of the city’s buses and the very next day approximately 40,000 African-Americans, who were the majority of the city’s bus riders, boycotted the system.

Rev Martin Luther King Jr, who had only recently been appointed pastor of a city Baptist church, was picked to head the committee which run the boycott. He was relatively unknown at the time but by the end of the Montgomery Bus Boycott, King had secured his place in history.

Many have called him the father of America’s civil rights movement. If he was the father, Ms Parks was certainly the mother, and through the bus boycott they gave birth to a movement that would culminate in laws that utlimately ensured equal treatment of America’s black citizens.

Ms Parks refused to give up her seat on December 1, 1955. The boycott began on December 4. It ended on December 21, 1956 – 381 days later, after the US Supreme Court ruled that segregation was a violation of the country’s constitution.

For more than a year, 90 per cent of Montgomery’s blacks either walked or car-pooled to work. They represented at least 75 per cent of the city’s bus ridership.

Even so, for those 381 days the bus company refused to comply with the protester’s demands. At first those demands were non-political: The African American community was simply demanding common courtesy, the hiring of black drivers, and a first-come, first-seated policy.

Eventually, the bus boycott morphed into a civil rights movement that dealt America’s segregation laws a death blow. In the end, the movement was defined by two things: A boycott that hit business owners where it hurt the most – in their pockets - and King’s non-violent approach to resistance.

The moral of the story is this: One, people resist for reasons beyond blind allegiance to their political leaders. And two, boycotts work.

Ms Masiga is Peace and Security editor at The Conversation Africa 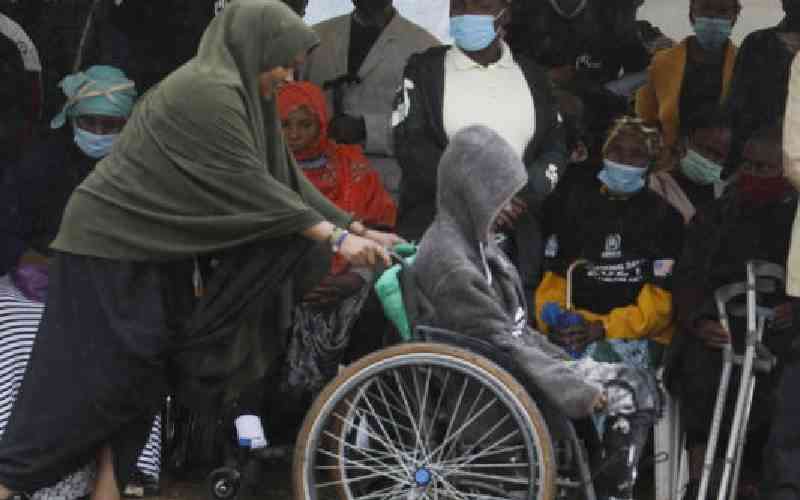 By Saada Hassan 5 hrs ago
During political transitions, children with disabilities are often forgotten