By Sara Okuoro | 1mo ago 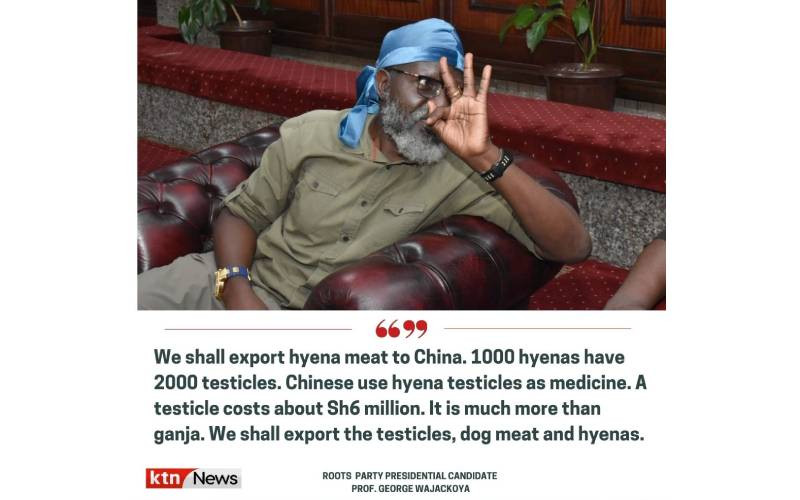 Among the tenets of his 10 commandments of freedom include a plan to revitalise the economy and pay Kenya’s debts. Apart from legalising bhang for medical and industrial use, the aspiring Head of State plans to introduce commercial snake farming and dog meat export. What caught the attention of Kenyans however was his idea of hyena-testicle export.

“We shall export hyena meat to china. 1,000 hyenas have 2,000 testicles. The Chinese use hyena testicles as medicine. A testicle costs Sh6 million. It is much more than ganja. We shall export the testicles, dog meat, and hyenas,” said Wajackoya.

But this is not the first time hyenas and balls have caused a stir. For years, buffaloes have soldiered on from the pain of having their testicles stripped off by hyena teeth.

KWS was concerned over unusual incidents of hyenas biting off and feeding on testicles and tails of buffaloes in Aberdare National Park.

The hyenas, according to the KWS officers, were biting off buffalo testicles and tails, a phenomenon said to have resulted in deformities of tens of buffaloes who roam the vast national park with vital body parts missing.

Aberdare National Park KWS Senior Warden Lilian Ajuoga said the phenomenon has been going on since it was first reported in 2008.

She, however, said the incidences were linked to lack of predators like Lions within the National park. The absence of predators hampered the food chain which places hyenas out of their scavenging role.

“In this case, hyenas are forced to hunt instead of scavenging for leftovers that have been left by other predators. This forces them to hunt on easily available things and since they lack the power to strangle, they depend on biting off hanging parts for survival,” she said.

“Young male buffaloes becomes the target as hyenas can easily creep, biting off the testicles and tails especially at night.”

“Hyenas literally feast on prey when they are still alive because they cannot kill. In the National Park, hyenas target young buffalo bulls so they can strip off the ‘loose-hanging’ parts.”

Within the National Park, although hyenas also hunt other small animals, their lack of speed in hunting other animals like gazelles makes buffaloes a target.

She added that the KWS would count the number of hyenas within the National Park for purposes of management and sustainability.

“We are planning on a doing an animal count so as to establish the number of hyenas for purposes of management to avoid cases of unsustainability. This will also help in boosting survival for both hyenas and buffaloes,” said Ajuoga.

Introduction of predators, she says, will also balance the food chain within the National park, which will place hyenas in their rightful position as scavenges, easing their survival as well as allowing buffaloes to sire.

“We are trying to avoid the scenario where buffaloes might not be able to sire in future with their vital organs bitten off,” she adds.

Kenya Wildlife Service Assistant Director in charge of Mountain Areas Simon Gitau said they were also involving researchers to shed light on what might have prompted the hyenas to bite off testicles and tails.

“This thing has been on-going for a while but that does not mean the population of buffaloes is going down. One healthy buffalo with intact organs can still mate with 50 females and successfully sire,” Mr Gitau said.

He said the trend is calling for more researches to shed light on how the incidences can be controlled.

By Wainaina Ndung'u 14 hrs ago
Premium Tracing the roots: Where Karua, Gachagua grew up