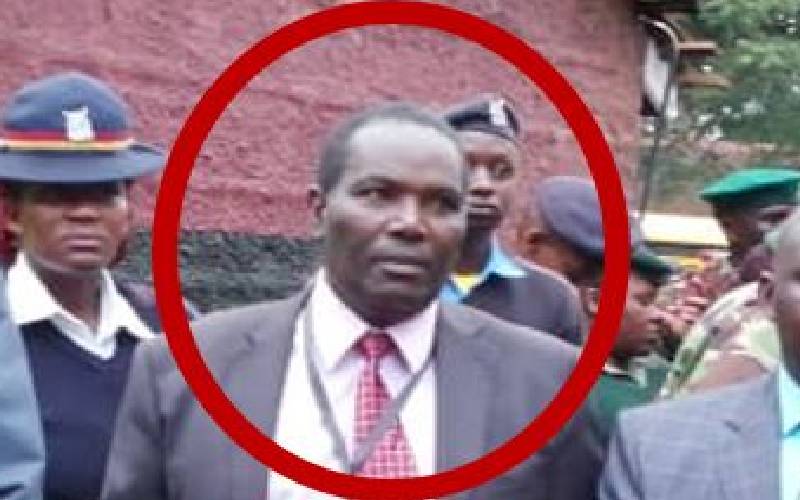 A school head in Thika collapsed in his office and died on Thursday afternoon.
Thika Sub-County police boss Beatrice Kiraguri said the Chania Boys Principal, Alan Macharia (pictured), was pronounced dead on arrival at the Thika Level 5 Hospital where he was rushed.
Simon Wahome, the deputy principal, said the deceased was in his office together with the secretary and the school bursar when he developed breathing difficulty.
He further stated that the deceased arrived at the school at around 8:30am and held a two-hour meeting with a board member and a contractor over the construction of a new dormitory.
“I was called from my house by the bursar. I found the deceased inside his car so I drove him to the hospital where he was pronounced dead,” he said.
Wahome further said according to the secretary, the head teacher complained of shortness of breath and walked out of his office to his car where he collapsed.
Thika West Heads Association chairman Julius Muraya said he was shocked by the death.
He described the teacher as a hardworking and selfless man who loved his job.
“The deceased was not only a colleague but a close family friend, I am deeply saddened by his death,” said the Thika High School principal.
Muraya said the deceased was on medication as three years back he had suffered a heart attack and was hospitalised at the Agha Khan Hospital.
In addition, Muraya said the deceased who was a long-serving principal of Kirogo Boys in Murang’a County was transferred closer home in order to manage his health.
His son Mwangi Macharia described his father as a loving and caring man who provided for his family.
His body was moved to the Kenyatta University morgue.
Share this story

By Phares Mutembei and Muriithi Mugo | 23 hours ago