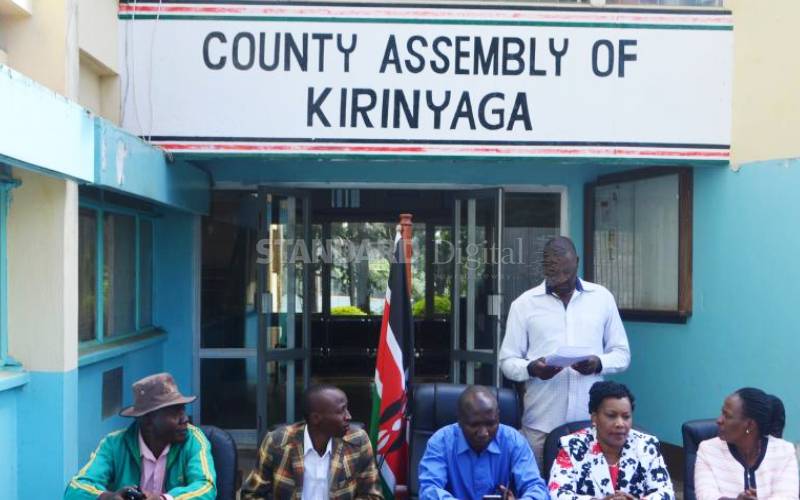 The County Assembly of Kirinyaga has passed a Sh6.1 billion supplementary budget for the 2019/2020 financial year.

This will enable the county government to pay delayed salaries and settle bills owed to suppliers.

In its report, Budget and Appropriations Committee chaired by Baragwi MCA David Mathenge factored Sh122 million to pay pending bills and another Sh4 million to be used to contain the spread of Covid-19.

MCAs said the settling of the bills would come as a relief to suppliers.

The report, which was unanimously supported by the MCAs, allocated Sh25 million for bursaries to needy students.

"The purpose of the supplementary budget is to provide for expenditure and revenue items which were unforeseen during the preparation and approval of the budget for 2019/2020 financial year," said Mr Mathenge.

The assembly further directed isolation wards be set up at the Kerugoya Referral Hospital, Kianyaga, Kimbimbi and Sagana hospitals where any reported cases of Covid-19 should be handled.

At the same time, the assembly directed the county public health department to provide all markets with sanitisers and running water as a control and preventive measure against the spread of the virus.

Governor Anne Waiguru has already confirmed that isolation wards have been set up and hand-washing facilities provided in all health facilities.

The assembly suspended its sittings as it united with the rest of the country in the fight against the pandemic.

Kenya Power turns on the lights in hospitals

The hospital is also said to have run out of food for patients.

By Timothy Kariuki and Jane Mugambi | 10 hours ago

By Phares Mutembei | 14 hours ago