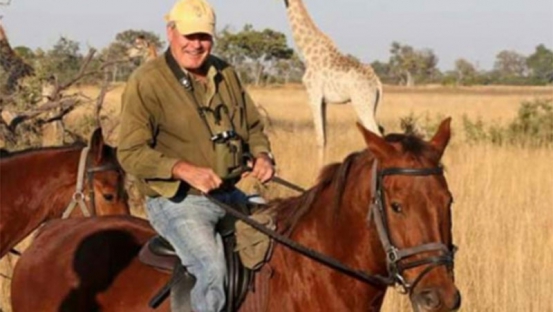 Kenyan farmer Martin Evans pushed open the bullet-holed wooden door to reveal a pool of blood where Duncan Murimi, a manager at his cattle ranch in northern Kenya, had been shot by intruders.

Evans, 62, bandaged Murimi's bleeding arm and hurtled back down the hill to his stone farmhouse in Laikipia, which has been hit by a wave of land invasions.

"He was having trouble breathing but he was still talking," Evans said sadly, his eyes shielded by a navy hat.

We have lost over Sh20m to illegal grazers, says rancher

Dozens have been killed and injured in Kenya's drought-stricken Laikipia region as armed herders searching for scarce grazing land have driven tens of thousands of cattle onto private farms and ranches from poor-quality communal land.

When they reached Ol Maisor farm, Evans discovered a second bullet had torn a huge hole in Murimi's left side.

"It was too late. He died," said Evans, looking out over his land which has been forcibly occupied since May 2016 when more than 20 herders with axes and torches cut six km (4 miles) of wooden post fence and ransacked a local school.

"I've had three guys killed on this farm in the last month."

Prominent victims of the Laikipia violence include British safari company owner Tristan Voorspuy, who was shot dead in March, and Italian-born Kuki Gallmann, author of the memoir "I Dreamed of Africa", who was injured in April.

With increasingly severe droughts, population growth and the enclosure of public lands, many traditional nomads, who are often poor and illiterate, lack grass for herds so move south to where private owners limit livestock numbers and rotate animals.

Between 40 and 75 percent of Laikipia - the country's second most important wildlife area after the Maasai Mara - is owned by cattle ranches and wildlife conservancies of up to about 100,000 acres.

Each cow needs at least 10 acres of land to be healthy, says Evans, who normally keeps 3,000 beef cattle on his 29,000-acre ranch, as well as allowing wild elephants and zebras to graze.

The invaders have brought 30,000 cattle on to his farm.

"We have nowhere to graze," said John Leparsanti, a Samburu herder dressed in a red cloak who lives near the Evans family, 200 km (124 miles) north of the capital, Nairobi.

"I cannot wait and see livestock dying and yet there is grass here."

Laikipia residents say local politicians are encouraging herders to invade private land to win support ahead of August elections and displace those who might vote against them.

Foreign tourists had to be evacuated by helicopter in February after armed herders forced their way on to land next to luxury eco-lodges reserved for wildlife.

One Samburu invader died in the firefight, according to local administrator Maurice Kisio, which led to revenge attacks.

Some 4,500 Il Ngwesi residents have been driven from their homes in recent months, Kisio said, as women in bright wrap skirts and beads queued to register for food aid while khaki-clad rangers with AK47s looked on.

Rose Kuraru, 27, was pregnant when she was shot by Samburu gunmen while cooking dinner in March, along with her six- and eight-year-old sons, in Il Ngwesi's Arjijo village.

They all survived after politicians flew Kuraru by helicopter to hospital for a Caesarean-section and surgery.

"I am fearful," said shaven-headed Kuraru, sitting in bed breastfeeding her baby girl, swaddled in a white blanket.

"They want to take Il Ngwesi for themselves."

Trouble began after Laikipia North member of parliament Mathew Lempurkel, a Samburu, promised to evict white landowners from Laikipia ahead of the 2013 elections, residents said.

"He was telling us: 'I will take the whites back to their place and I will give you all this land'," said Teresia Karmushu, who fled her Il Ngwesi home in March after Samburu started shooting into people's houses at night.

"We didn't want the speech ... because these whites are helping us," she said, adding that many locals, like her husband, work in the tourism and conservation industry.

Lempurkel denies calling for violent evictions or inciting Voorspuy's murder, for which he was arrested in March with charges later being dropped for lack of evidence.

"We don't want to go a Zimbabwe way," he said, referring to the violence that ensued when followers of Zimbabwean President Robert Mugabe stormed onto white-owned farms in the early 2000s.

"Let the government compensate our white brothers and let the land revert back to the ancestral owners... Why should foreigners from the UK own millions and millions of (acres of) land in Kenya?" he told the Thomson Reuters Foundation.

There are long-standing grievances over skewed land ownership in Kenya, as in other former white settler colonies, like South Africa, where President Jacob Zuma mooted the idea of expropriating land from white farmers without compensation.

British colonialists gave most of Laikipia to Europeans after getting the Maasai to sign a treaty in 1911 agreeing to move some 300 km southwest to a native reserve.

At least 20,000 people were forcibly moved off their land at gunpoint, according to historian Lotte Hughes.

After independence, President Jomo Kenyatta gave or sold most of the departing whites' land to his own ethnic group, the Kikuyu, many of whom had also lost their land under colonialism.

"That is a source of pain to any Maasai," said Maasai campaigner Johnson Mali ole Kaunga, who says the treaty was "fraudulent" because the illiterate clan leaders who put their thumbprints on it did not have authority to give the land away.

Some cases will involve public hearings, he said, before the NLC can recommend an apology, compensation or land restitution.

Parliament has yet to pass regulations guiding the process and proposals to create a compensation fund.

Evans said he would willingly sell his land, which his father bought in 1968, to the government but he is tired of being scapegoated as an 'outsider'.

End of the road for mobile money loan defaulters

If you are in the habit of defaulting on your mobile-based loans, your proverbial 40 days could soon be over.

By Graham Kajilwa | 16 days ago

By Joackim Bwana | 19 days ago