From house help to senior politician; Sabina Chege opens up on life 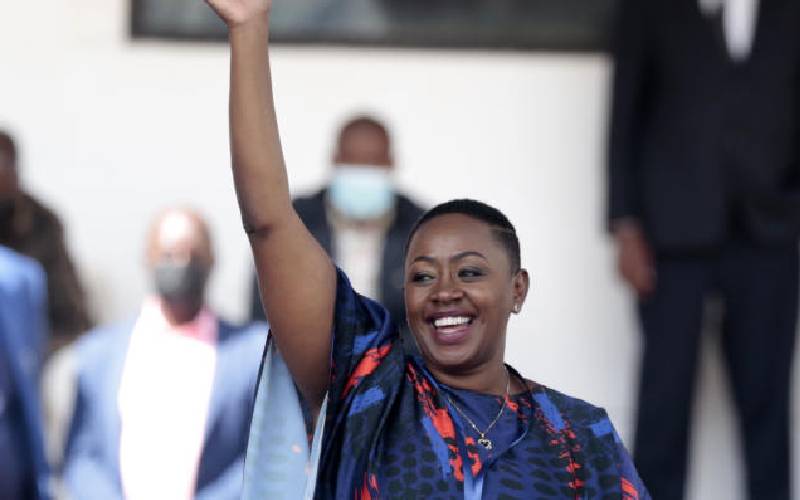 Murang’a Woman Representative Sabina Chege, who is on the radar of the electoral body over remarks she made at a campaign rally on Thursday, has weathered many storms.

Chege kicked up a ruckus when she seemed to suggest at an Azimio rally in Vihiga county that Jubilee rigged the 2017 presidential poll to deny ODM leader Raila Odinga victory.

Her utterances swiftly earned her condemnation from politicians, now rooting for a deputy president William Ruto presidency, and a date with the Independent Electoral and Boundaries Commission, which summoned her to appear before it on Tuesday. Chege, who some years back swore an affidavit to include the name ‘Maitu’ (mother) in her ID, to sway women voters, however, maintains her remarks were taken out of context and spun to suit a certain narrative.

She claims that what she meant was that (Jubilee) had a good strategy on how to win the last elections.

“I did not exactly mean that we stole Raila’s victory.  I was only contributing to what previous speakers at the rally had said in order to encourage the people to register as voters in large numbers so that Raila can have the numbers to take him to State House.

“ Elections are won six months before voting day and that is the secret we have been using to defeat our opponents. I told them that now that we are with them, we shall work together to win the election,” she says.

Chege adds those ‘’spinning’’ her remarks are malicious since they left out the part of her speech that said Raila is a peoples’ project.

“They lack an agenda and that is why they are discussing me but I am happy to have elicited the debate despite the fact that I’m not running for President,” she says.

The 44-year-old mother of three, who joined politics in 2013, believes Raila is the best aspirant to succeed President Uhuru Kenyatta due to the sacrifices he has made for the country.

“It is no doubt that Ruto is the most popular presidential candidate in Mt Kenya region due to the obvious reason that he has always been in the region for the past nine years.

“For Raila, the region has been a no go zone but, at the moment, the conversation has changed. In every five people, three are for Ruto and two are for Raila. Ruto can’t gain any additional vote while Raila can’t lose any vote but he can gain. It depends on how he (Raila) approaches those who are not yet decided and how Ruto will sustain his votes,” she says.

Chege, who has worked with all three leaders, also says Ruto has God’s favour but lacks humility while Raila has a good heart and Uhuru is the most misunderstood politician in Kenya.

“Ruto had God’s favour but he lacks humility and disrespected the President’s directive on premature campaigns. Uhuru means well for the country but people do not understand him while Raila has a fanatical following but a huge chunk of people who do not know him,” adds the Woman Rep.

She says for people to know Raila better, he should increase his interactions with those that don’t know him for them to understand his contributions to the country.

The president, Chege says, has been betrayed by people whose hands he held, politically.

“We could not get to State House without consulting some of the leaders like Irungu Kangata, Mithika Linturi and Kimani Ichungwa, but they are now disrespecting the president,” she notes.

She argues that the president saw to it  that the leaders got plum parliamentary committees which they chaired but their actions show they are thankless .

But just why did she part ways with Ruto?

“We are obliged to respect authorities but Ruto and his team chose otherwise. I was dissapointed when he funded a parallel women league to counter our Team Embrace where we were inviting all women from across the political divide,” she says.

The MP says she chose to respect her party leader and focus on her parliamentary roles as opposed to politicking. She defends her move by making reference to the Bible, which she says, calls for people to respect authorities.

For a woman who has risen from a house help to the chairperson of the National Assembly Health Committee, Chege, the last born in a family of nine, says her journey to politics has not been smooth. She describes herself as a  bright and an all-around pupil who at one time was forced to be transferred to another school in a bid to get a ‘serious challenger’. After high school, Chege was employed as a house help in Kayole, Nairobi where she worked until an opportunity to act in ‘Tausi Wangu’, a  Kenya Broadcasting Corporation (KBC) show came knocking.

She later joined the University of Nairobi to pursue a degree in Education and as a first-year student got an opportunity to work at Kameme FM, now owned MediaMax Network Ltd as a late night presenter.

“I was a student by day and a presenter at night. I sponsored my education from the pay I got from Kameme FM,” she reveals.

After graduation, she moved to KBC as controller of commercial radio services, where she often offered to stand in for her colleagues who were absent from work.

“ I was not receiving any pay for standing in for my colleagues until my boss offered me a show during the morning hours and for this, I hit the airwaves and got popular. It is among the reasons I was elected as the first woman rep in Muranga,” she says.

Chege adds she used the platform to agitate for development for her community without any intention of joining politics but recalls supporting former Kigumo MP Jamleck Kamau to retain his seat. Kamau is now among candidates eyeing the Murang’a governor position.

“During the 2013 election, a delegation approached me to unseat Kamau but after consultations and prayers, I decided to vie for the woman rep position,” she says.

She takes pride in her ‘exemplary performance’ in women economic programmes in Murang’a such as poultry project where organised women groups are given chicks and tanks for water storage.

She also takes pride in the role she played to help heal the rift between teachers and tr the Teachers Service Commission when she took over as chair of the Education Committee during her first term. She participated in establishing the policy framework for Competency Based Curriculum (CBC)  and in her second term, upon being appointed the chair of Health Committee, introduced several health Bills in the National Assembly.

“After I was elected women representative, I joined hands with Florence Kajuju and other women and pushed for the National Government Affirmative Fund, which saw woman representatives get funds to help the electorate and give them a political lifeline,” she says

But after serving for two terms, she is at a crossroads on whether to vie for governors, Kigumo parliamentary seat or to play her cards safe and wait to be picked as Raila’s running mate.

“I have what it takes to deputise Raila. I’m a gem and I have the experience but before then, my prayer warrior group and my strategic team will have a consultative meeting. In two weeks time, I will announce which seat I will be seeking,” Chege adds. For Chege, who believes she will one day become the country’s first female president, any candidate for State House who picks a woman running mate in the August poll will have an added advantage.

She confesses to having had to grow a thick skin as a woman in politics.

“I have been a victim where people use gender to demean you when everybody sees you as a sex object. Women who admire being in your position also tarnish your name and say negative things about you,” she says.

Being alive to this fact has made her more open in discussing issues with her family, as she pleads with the public to remember that politicians are also human and have families that have to contend with all sorts of claims made against them.

“I have grown up girls and we discuss what they read on social media. We laugh together, they even wonder why those who write don’t ask them because they know me better,” says Chege.

After the death of celebrated King of Benga music John D Mathew, social media platforms were awash with claims that Chege was his first wife. The MP denies the claims and maintains that the two were not in any romantic relationship.

The closest the two were, according to Chege, was when she appeared in a video of his debut song Njata Yakwa (My star) where she played the role of the musician’s lover.

She also played songs of the late musician at Coro FM.

“I decided to keep my private life away from politics and that is why I never post any of it on my social media platforms,” she says.

Chege also recalls the lowest moment in her political life when a suspected con registered a sim card under her name to lure unsuspecting legislators, saying she had to fight for her rights as a woman since the matter was later politicised to advance certain political theories.

Then came the claims, by those she calls  ‘her political detractors’ to advance a narrative that she is a weakling and an emotional leader who cries publicly due to her political frustrations.

‘’I have only cried (publicly) twice. First, when I was overwhelmingly reelected with more votes than those of the senator and the governor and my team surprised me with a cake. I also cried at a function in Kenol when I told members of the public not to be deceived that their son, Uhuru Kenyatta, is bad,” she says.

A journalist and teacher by profession, Chege likes Mukimo food and Mugithi songs with Jose Gatutura and Samindo as her best artists. She also likes the Relationship Goals bookby Michael Todds.

Her philosophy in politics? Not waiting to be called on the table but proceeding to the table.

Role of HR in achieving an organization’s vision

HR has a responsibility to make sure employees articulate a company’s vision, mission and values through clear employee communication.

Road nearing completion has been cordoned off and lacks crossways for pedestrians who have to walk long distances, risking their lives to jump wall.

By Ndung’u Gachane | 6 hours ago