The extent of vandalism and theft at the Africa Spirits Limited factory in Thika was evident Tuesday as a Nairobi Court stumbled upon empty barrels of ethanol while others were found to be missing.

The visit by Nairobi Chief Magistrate Francis Andayi’s court was met with more chaotic scenes as they found broken bottles, empty shelves and pallets as well as vandalized offices and equipment.

The visit to the factory which has been under police guard since a dramatic raid over a year ago followed an application by Africa Spirits Limited and Wow Beverages seeking to ascertain the state of the factory and the premises, which are now a crime scene following reports of theft and widespread damage.

Inside the factory premises, defence lawyers led by Cecil Miller and Wilfred Nderitu pointed out to the court that the all the gates to various warehouses had been interfered with since it had fresh welding marks despite having Kenya Revenue Authority seals.

Miller told the court that the marking on the doors clearly showed that the warehouses were broken into before it was welded back. 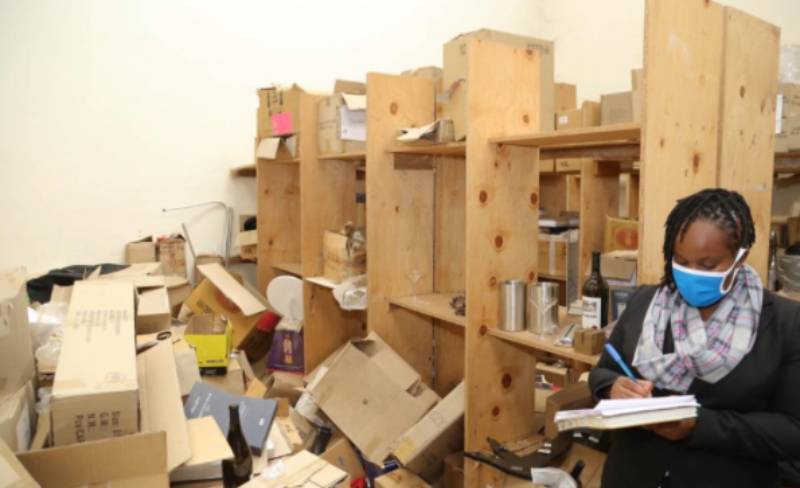 Also evident during the visit were missing computers, TV sets, and drums of ethanol.

The server room was also forcibly broken into and machines vandalized.

CCTV cameras were also vandalized and lawyers noticed water bottles with 2020 manufacture dates in rooms that were supposedly sealed from last year.

In one of the warehouses identified as A, it was established that a Kenya Revenue Authority customs seal that had been used to secure the doors was missing.

It also emerged that the doors to the warehouse had been welded together, but it was unclear when this was done.

In another warehouse where finished products were store before shipment an entire stretch of shelves was found empty with vandalized pallets thrown all over the floor.

Nairobi Chief Magistrate Francis Andayi was informed that the General Service Unit formally took over control of security at the premises on June 24 this year.

Before that, the factory was guarded by regular police from Thika.

The court will hold a virtual mention on September 28.