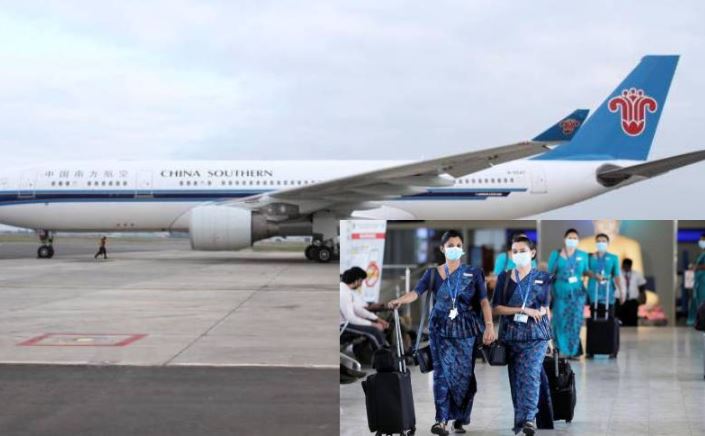 A Kenya Airways staffer has been suspended for recording the arrival of a China Southern Airline plane at Jomo Kenyatta International Airport (JKIA) on Wednesday night.

The aircraft brought in 239 passengers from China, the epicentre of the Covid-19 virus. The Ministry of Health advised the passengers to voluntarily quarantine themselves for 14 days after being cleared at JKIA.

Kenyans were irked that the passengers were allowed entry into the country. Some took to social networks to express displeasure on the government’s move with some of them saying it is tantamount to risking their lives.

"Enemies of the People" shouted The Standard . "Virus: Why Kenya is dancing with death," boomed The Nation.

Gire Ali, the KQ employee, linked to a viral video recording of passengers disembarking from the Chinese aircraft was suspended the next day (Thursday).

“Following a report of video recording of China Southern Airline aircraft at JKIA and circulation of the video clip widely on social media on 26 February 2020, and your alleged involvement in the matter, it has been decided that you be suspended from duty with effect from 27 February 2020 in accordance with provision of clause 16.5 of the Company Hit Policy Manual. This is to pave way for further investigations into the matter,” read part of a letter from the KQ human resource office.

“During the period of suspension, you will be required to avail [sic] yourself to the investigating team, your manager or any other person in authority as and when required. You are therefore required to remain contactable and within easy reach during the period. Also note that the suspension will be on full salary,” continued the letter.

In December 2019, 34-year-old Dr Li Wenliang sent a message to fellow medics about the outbreak upon discovering the coronavirus. Three days later, police paid him a visit and told him to stop. He returned to work and caught the virus from a patient. He had been in hospital for at least three weeks before he succumbed to the virus on February 6, 2020.

Dr Li was working at the epicentre  of the outbreak in December when he noticed seven cases of a virus that he thought looked like SARS - the virus that led to a global epidemic in 2003. The cases were thought to come from the Huanan Seafood market in Wuhan and the patients were in quarantine in his hospital.

He had also been summoned to the Public Security Bureau where he was told to sign a letter accusing him of "making false comments" that had "severely disturbed the social order".

"We solemnly warn you: If you keep being stubborn, with such impertinence, and continue this illegal activity, you will be brought to justice - is that understood?"

Underneath the letter, in Dr Li's handwriting is written: "Yes, I do."

He was one of eight people who police said were being investigated for "spreading rumours".

The deadly novel coronavirus has already spread to over 40 countries prompting fears of a pandemic.

More than 74,000 people have been infected by the virus in China and hundreds more in other countries.

As a consequence, airlines have suspended flights in response to the coronavirus outbreak.

Despite suspending flights to China, Kenya has been allowing other airlines from china entry into the country.