Sh1 trillion - Shocking numbers in the plunder of a nation

For more than five years, the Auditor General Edward Ouko has been pointing out grey areas in how taxpayer's money is spent by government agencies.

Although runaway corruption has become the norm over the past few years, the Sunday Standard has compiled, from Ouko's report, the total amount of money suspected to have been lost to corruption over the years.

A crunching of numbers from the last five annual reports by the Auditor General's office that either continue to gather dust in Parliament or are being ignored by investigative agencies show that taxpayers could be losing an average of Sh1 trillion every year.

This means that in the last five years, Kenya could possibly have lost Sh5 trillion to corrupt individuals, cartels fueled by leaky government processes and an incorrigibly corrupt public service.

During the five-year period of audit results, a total revenue of Sh4.82 trillion was collected. An analysis by Sunday Standardshows that only Sh590 billion of government expenditure has been properly accounted for, representing 13 per cent of total expenditure. A staggering Sh4.2 trillion, some 87 per cent, was either lost, not spent well or not accounted for.

Sh368 billion of the Sh1 trillion is spent without any accountability. Not even the chief government gate keeper can keep tabs on the hemorrhage of public funds.

To put the numbers into perspective, Sh368 billion is just Sh41 billion shy of what was spent to construct and buy locomotives for the first phase of the Standard Gauge Railway from Mombasa to Nairobi. It is also the amount of money that has cumulatively been lost by government in the last five years.

When put into context, the Sh368 billion lost can fund all the 47 counties in the current financial year, if you add just Sh4 billion, or better yet pay all the government employees if you add Sh48 billion to it.

Missing from this Sh368 billion is Sh215 billion from the controversial Eurobond, which remains unaccounted for three years later.

The matter was a hot political potato in the run up to the elections last year. The last time this matter was heard was when the Auditor General said he was going to send auditorsto the US to investigate.

Still from the reports, some Sh12 billion collected from the public by various agencies in the audited five years has never made it to the Exchequer. 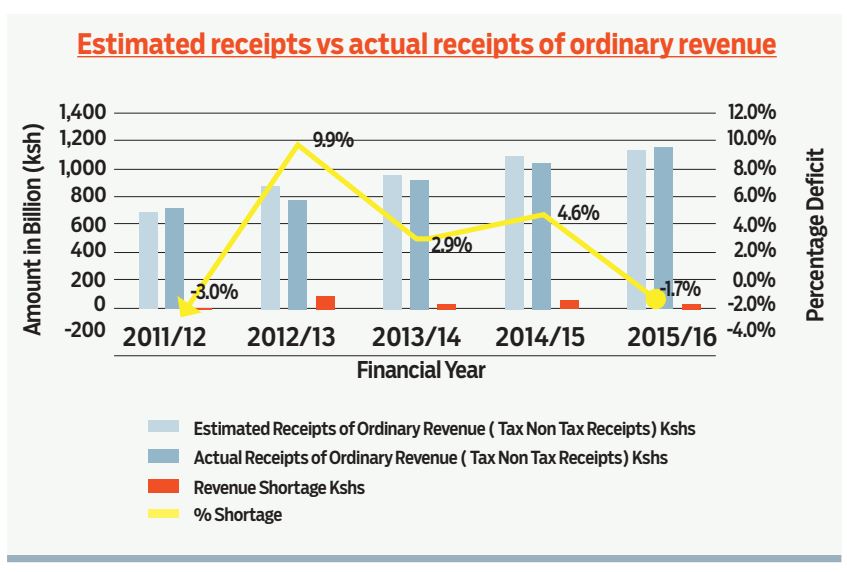 In 2015, Sh3.7 billion collected did not make it to Treasury. The previous year, Sh3.1 billion got lost between the various collection points and Treasury, while in 2013 Sh2.7 billion was pocketed by individuals. This trend replicates itself in all the audit reports analysed by Sunday Standard.

On average, our analysis shows that only about 30 per cent of Kenya’s annual Budget which is now Sh3 trillion a year is spent and reported correctly. From the remainder, about 50 per cent is not accounted for correctly while the remaining 20 per cent is siphoned by faceless people who continue to be in office under unclear circumstances.

But even where there is some form of accounting of money spent, there is massive representation of numbers, repetitive non-remittance of revenue to the Exchequer by some agencies and bad accounting. So bad is the problem that the following two statements by the Auditor General have become a permanent fixture in his last five audits.

“There is weak and inadequate maintenance of accounting records across a number of Ministries and departments. A number of financial statements differed materially with the Ledgers and Trial Balances, from where ideally they ought to have been derived,” Ouko has said in a number of his reports.

“As such, we don’t know what each ministry or department owns and consequently the net worth of the Government of Kenya as a whole cannot be determined.”

The losses include by departments meant to be custodians of the law or public money such as the Treasury, Judiciary and even the Directorate of Criminal Investigations (DCI). To date, for instance, DCI owes the Exchequer Sh193,029,466 that it collected in the 2015/2016 financial year for issuance of 543,108 Police Clearance Certificates.

Yet every year, the National Audit Office continues to prepare such reports but they are not acted upon. MPs, who cost taxpayers Sh21 million each a year for representation, are supposed to be the first to act on the Auditor General’s reports, but continuously treat his findings casually.

Edward Ouko, who has served as Auditor General since 2011, too, has in recent months toned down his abrasive nature that had before last year’s election earned him 'enemy tag' by State House. Jubilee MPs had plotted to remove him from his post, which is protected by the Constitution, immediately after winning a second term but they too have changed their minds.

“If we don’t watch out, it will engulf us,” the Auditor General told Reuters recently on the level of graft describing it as shocking.

Consequently, officials culpable for the graft continue to walk free while their counterparts have their days in court. It is this reality that is raising political temperatures, with some quarters openly saying that the reinvigorated war on corruption is targeted.

On Friday, when top officials from Kenya Pipeline Company (KPC) and the National Hospital Insurance Fund (NHIF) were arrested, Deputy President William Ruto asked institutions mandated to fight corruption to be objective and avoid being used to settle political scores.

“Let us not politicise matters to do with independent institutions of prosecutions and investigations. They must operate independently without instructions from anybody, without serving any partisan interests because that is how we are going to succeed,” he said in Elgeyo Marakwet.

But as the DP spoke, religious leaders called for a review of laws to make corruption a treasonable offence.

“The window-dressing theatrics and rhetoric against corruption must give way to a decisive, irreversible and final national resolve to put it behind our national life,” the National Council of Churches in Kenya (NCCK) said in a statement read by Canon Peter Karanja.

“Around Sh2 billion is stolen from Kenyans every day,” said the religious leaders.

Nevertheless, the amounts that continue to be stolen annually are staggering. Five Ministries -- Devolution, Agriculture, Interior, Health, Transport and Education -- emerge as the leading repeat offenders in unsupported expenditure.

In the 2014/2015 financial yearm Sh7,321,277,260 was reported as missing while in the previous yearm Sh66,782,697,987 could not be traced. During those two years the Ministry of Education lost Sh23 billion, Health (Sh22 billion) and Transport Sh22 billion. And at Foreign Affairs, officials purchased a building in Kampala for Sh650 million, Sh500 million more than the market price.

A letter from the ministry asked the Lands Principal Secretary to provide an opinion of the likely current market price of the property. However, the Ministry of Lands nominated a building surveyor instead.

To date, no one has ever been arrested because of the controversial purchase of this building, same to those responsible for purchase voting materials by the Independent Electoral and Boundaries Commission (IEBC) whom the Auditor General flagged as having fraudulently spent Sh1.6 billion.