Even in the middle of the Covid-19 pandemic that has left in its wake a social and economic crisis, the supremacy battle for the region’s banking king rages on.

Equity Bank surpassed KCB Group in profits just a few months after crossing the coveted Sh1 trillion mark in asset value. But even as Equity chipped away at KCB’s lead, the latter held on.

Never mind that the two banks’ chief executives declared 2020 a “year of survival and not profits.”

But beneath this veneer of survival was an aggressive regional expansion as both lenders jostled to grab as much cash to become the region’s banking kings.

In the months preceding the announcement of the first case of Covid-19 in the country in March last year, Equity Bank had been laying the ground for its expansion strategy.

However, on June 4 last year as the pandemic raged on, the lender sent out a terse statement to newsrooms.

The country’s second-largest bank by market size was going to pull the plug on its bid to acquire some lenders in four African countries. 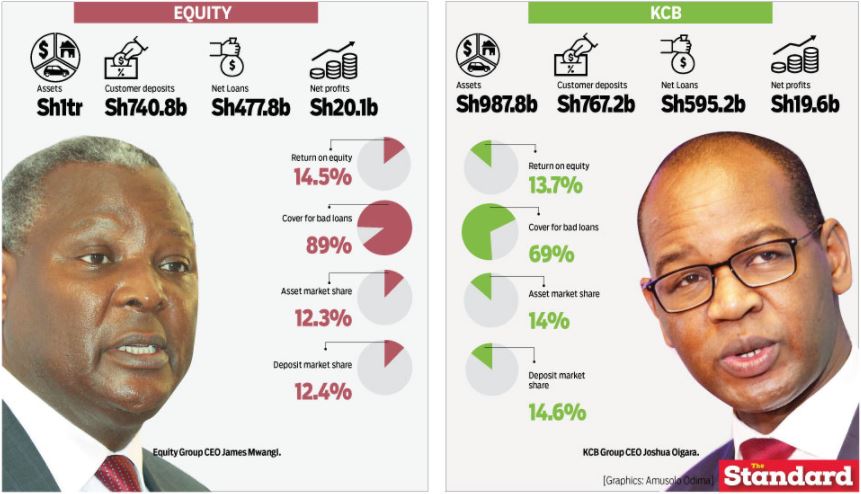 Predictably, Equity attributed the decision to the adverse effects of the Covid-19 pandemic.

This was the same reason that the James Mwangi-led bank had earlier given for its decision to recall its dividend payout.

But three months later in August, Equity announced that it had reached an agreement to acquire a majority stake in Banque Commercial du Congo (BCDC), a Congolese bank, at a cost of Sh10.3 billion.

KCB for its part was not resting on its laurels and towards the end of the year in a surprise move announced that it would snap up banks that had been snubbed by Equity for Sh4.4 billion.

Completion of the deal would see KCB become the first listed firm in the region to cross the Sh1 trillion mark in asset size.

“There is not a single other organisation in our market that has reached a trillion shillings, except the government, in terms of assets,” KCB CEO Joshua Oigara, had told Financial Standard in an earlier interview.

But Equity’s Mwangi was not going to let Oigara run away with this accolade.

On the eve of Christmas, Mwangi announced that Equity Bank had crossed the Sh1 trillion mark in asset value after it finalised the acquisition of BCDC. This made it the most valuable company in East and Central Africa.

“We are delighted to witness this milestone that has shattered the psychological barrier of a trillion-shilling balance sheet,” he said.

Ronak Gadhia, a director at EFG Hermes, an investment bank, noted that being ranked the most valuable company has three benefits.

First, Gadhia, who covers Sub-Saharan Africa banks, said, it signals to the management that they have the right strategy in place.

Second, it increases brand awareness, which, in turn, helps it raise more capital, especially from the international markets.

But as the two banks battle it out for supremacy, CBK Governor Patrick Njoroge is not impressed.

Dr Njoroge has in the past expressed his displeasure with this kind of contest where every bank wants to beat the other in profitability. He said this resulted in the high-interest rate regime that saw borrowers pay expensively for their funds.

Njoroge said while bank profitability when measured using return on equity has gone down from the highs of 30 per cent, it is still relatively higher compared to other jurisdictions in the region.

“We expect shareholders to be more accepting of lower returns,” said Dr Njoroge in late 2019.

Competition has not been just for the top spot. There has also been a fierce fight for the third position between NCBA and Co-operative Bank.

For the longest time, the latter had positioned itself as the country’s third-biggest bank, but this changed in 2019 when Commercial Bank of Africa and NIC Bank merged to form NCBA.

Ever since, Co-op Bank has been making a spirited attempt to claw back some of the lost gains, including acquiring Jamii Bora, which it later renamed Kingdom Bank.

The lender succeeded in reclaiming the position as the country’s third-largest lender by assets in the year ended December 2020 when it also declared the biggest dividend payout in the industry of Sh5.9 billion.

This saw NCBA, majority-owned by the Kenyatta and Ndegwa families, remain at the fourth position with assets valued at Sh527.9 billion compared to Sh494.8 billion in 2019.

In the last decade, there have been 12 mergers and acquisitions (M&As) in the banking sector, with the country’s sector going through an organic consolidation.

Besides the merger of CBA and NIC, other prominent consolidations between 2010 and 2021 have included the acquisition of National Bank of Kenya by KCB, Habib Bank Kenya by Diamond Trust Bank and Giro Commercial Bank Ltd by I&M Bank.

Since the pandemic struck in March last year, all the major banks have found the going tough, reporting a decline in net profit in the year ended December. Over the period, Equity Bank’s profits fell 11.6 per cent to Sh19.7 billion, while KCB recorded a 22 per cent decline in profitability to Sh19.6 billion.

Both have attributed the decline to the substantial increase in loan-loss provision as insurance against possible defaults by customers distressed by the pandemic went up.

Equity Bank’s non-performing loans (NPLs) - or loans that have not been paid for more than three months - increased by half, while KCB’s went up by 52 per cent.

An increase in bad loans saw all the large banks set aside some funds in case of defaults.

This means that should the two lenders decide to write off all their bad loans, Equity will lose only 11 per cent, while KCB will forego 31 per cent.

Equity Bank might have withheld dividend payouts to its shareholders for two calendars, but it had a stellar performance. It surpassed KCB as the most profitable bank in the country.

If anything, Equity’s decision to withhold dividends while causing some jittery at the stock market, left it with a strong capital base to navigate the Covid-19 whirlwind. Its shareholders’ funds grew by 24 per cent to Sh139 billion up from Sh112 billion. 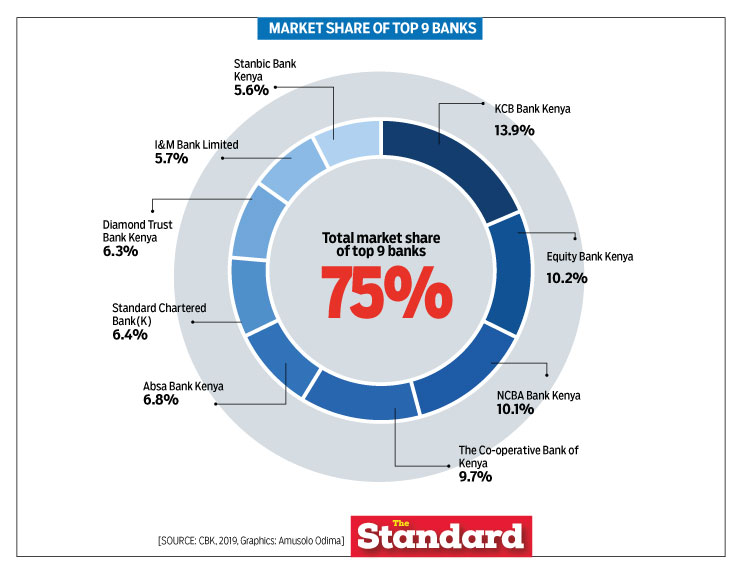 KCB’s shareholders’ funds, on the other hand, increased by 9.8 per cent to Sh142.4 billion compared to Sh129.7 billion a year earlier.

Equity’s customer deposits also increased by slightly over a third to Sh740.8 billion, while KCB’s grew by 11 per cent to Sh767.2 billion.

Other metrics used to determine the market size of a bank are the number of deposit accounts and loan accounts, which are yet to be made public by the Central Bank of Kenya (CBK), the financial market regulator.

Nonetheless, it is easy to surmise that KCB, while still at the top, it is not sitting pretty.

By the end of 2019, the supervision report from CBK showed that KCB was the largest lender with a market size of 13.89 per cent followed by Equity with 10.24 per cent.

The latter had the second-highest number of deposit accounts, behind NCBA at 11.28 million. KCB was third with 8.27 million deposit accounts. However, KCB had an edge over Equity in the number of loan accounts at 2.1 million. This translated into a fifth of the total market share. But KCB was second to NCBA with 3.95 million loan accounts or 47 per cent.

But Equity is not only profitable, with shareholders getting Sh14.5 for every Sh100 they have invested in the bank compared to KCB’s Sh13.7, it is also the most liquid bank.

Because cash is reality, Mwangi, speaking during the release of Equity’s financials, described his bank’s Sh500 billion liquid assets as a “war chest” for this year.

“This is three per cent of the aggregate GDP of all the economies we are operating in so essentially that gives an impression of the firepower that the group has,” he said.

Oigara has described the race to the top between KCB and Equity as “a creation of very disingenuous journalists.”

“This imagination that there is a race… there has never been a race. In fact, I am very proud that two of the largest banks today are Kenyan banks,” said Oigara in an earlier interview with Financial Standard.

But he admitted that the two lenders’ routes might cross. “And I think it is quite normal in business because we are in the same marketplace,” he explained.

On the acquisition of the banks that Equity had failed to snap up, Oigara noted that the reason was simply that they saw an opportunity to do so. “Not every engagement works,” he said.

KCB will pay Sh3.5 billion for a 62 per cent stake in Banque Populaire du Rwanda (BPR) and Sh872 million for the entire stake in African Banking Corporation Tanzania should the plan go through.

Both banks have also moved heavily to up their capital buffers in response to the tough operating environment.

For its capital buffer, KCB went ahead and brought in tier two debt of about $150 million.

An analysis of Kenya’s nine big banks that make up 74 per cent of the market saw lenders set aside a record Sh110.9 billion as insurance against possible defaults.

Waithaka’s four daughters have been accused of attempting to disinherit his daughter-in-law from the 10.5 acres

Matheka advised the two to agree imminently or in default see the case proceed and determined by court.