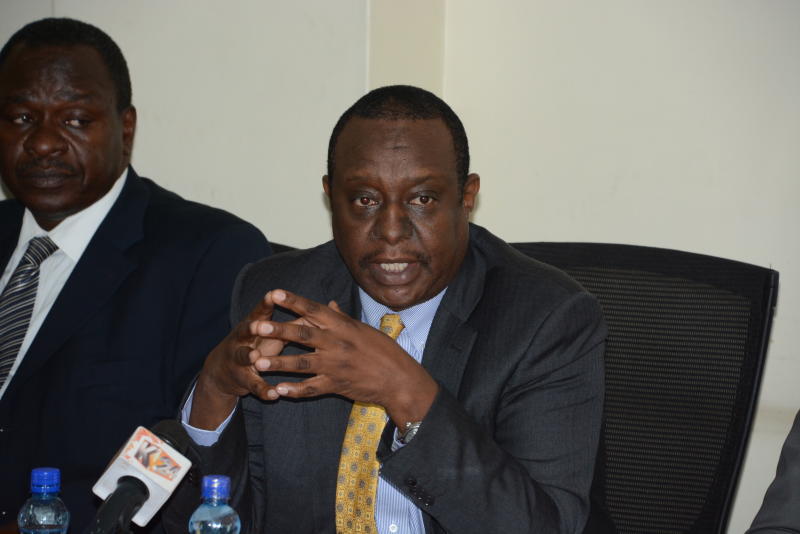 Henry Rotich, the National Treasury boss, arrives back in the country this weekend after procuring a Sh210 billion international loan that is slightly more expensive that the previous issues.

But even with the excitement generated by the latest Eurobond, the secured funds will likely to be a bitter, yet critical pill in plugging the country’s revenue shortfalls.

CS Rotich took up just a fifth of what lenders offered, in proceeds that would go a long way in reducing the government borrowing needs at home.

Besides being used to repay some maturing debt, the money will be pumped into crucial development projects that otherwise would have stalled for lack funding.

Kenya’s third Eurobond issue is slightly more expensive than the previous two, partly because of prevailing market conditions internationally, where interest rates have relatively soared, as well as the country having higher debt levels than it did the first time around.

Further, it had been reported that Mr Rotich (pictured) hoped to convince lenders to allow Kenya to repay the loan in two tranches, in May 2029 and 2049. However, the deal tabled was slightly different.

Of the two tranches accepted, Kenya will pay an interest rate of seven per cent for the portion of the loan whose repayment will start in 2023, and eight per cent for the other half that matures starting 2028.

This comes on the heels of a recent warning issued by the International Monetary Fund, which cautioned that at the pace of Kenya’s borrowing, newer loans could only get costlier.

Rotich’s proposals would have bought the economy more time to organise its finances.

As soon as the money arrives at the Central Bank of Kenya, some Sh75 billion ($750 million) plus a final interest of Sh2.2 billion will be paid out to the lenders of the 2014 debut Eurobond.

Another portion of the money, raised from borrowing from American and British lenders, will be spent on development infrastructure projects, which the Treasury did not specify.

Further, apart from retiring the first portion of the 2014 Eurobond, the funds could potentially be used to repay “other debt obligations”.

The current Eurobond, which attracted offers nearly five times what Rotich was seeking, could be viewed as a major vote of confidence in the Kenyan economy.

“The announcement of Kenya’s issuance triggered an overwhelming response from investors that amounted to an order book of $9.5 billion (Sh950 billion), an over-subscription of 4.5 times,” the CS said following the conclusion of the issue.

Interest on bonds is paid out every six months after borrowing, meaning the lenders for this Eurobond will start earning from November this year.

Rotich approached international lenders against the backdrop of a decision by the IMF to withdraw a standby loan that was structured to cushion the local currency from shocks over failure to implement some measures, including the removal of a cap on bank rates.

The IMF facility was seen as an endorsement that would offer additional confidence to lenders that their money was safe.

But despite the sentiment internationally, economists at home are concerned with the rate of accumulation of debt, where a general consensus is that it is approaching unsustainable levels.

The country’s total debt, including what the State has borrowed at home, reached Sh5.4 trillion after the latest issue, or nearly 62 per cent of the 2018 Gross Domestic Product (GDP).

While the amount in nominal terms could be argued to be below that of other countries, some already under debt distress, it is the ability of the economy to generate the required revenues in foreign currencies that is of concern.

Billow Kerrow, an accountant and former Mandera senator, is among leaders who feel legislators and Kenyans should at least be told what was contained in the prospectus.

Mr Kerrow noted that Eurobond issues were international loans that required prior approval by Parliament as per the Constitution.

“I can’t remember any prospectus or proposal shared with Parliament,” he told The Standard.

Kenya’s current dollar reserves after the receipt of the bond will exceed Sh1 trillion, but the June Eurobond repayment will take away Sh77 billion in principal and interest.

Further, in the next financial year, Kenya is scheduled to repay more than Sh1 trillion in principal and interest, which is more than 75 per cent of projected tax collection.

A huge chunk of the principal is, however, expected to be rolled over.

Rotich has, however, not indicated what assurance he gave to lenders that their loans would be repaid, details that are usually be contained in a document called a prospectus, which is yet to made.

It is hoped that the CS would share the prospectus so as to offer Kenyans a glimpse of the government's assurances to secure to loan.

Secrecy relating to specific terms of borrowing for this Eurobond, pretty much like most of the Sh2.9 trillion foreign loans (to reduce to Sh2.8 trillion next month), has been a concern for many Kenyans.

Previous prospectuses were only made available long after the funds had been borrowed and after long persuasion.

Money held by the Unclaimed Assets Authority (Ufaa) could triple to Sh35.4 billion when it is allowed to sell shares and forex it holds.

The making of a Sh2b healthcare start-up
Feedback