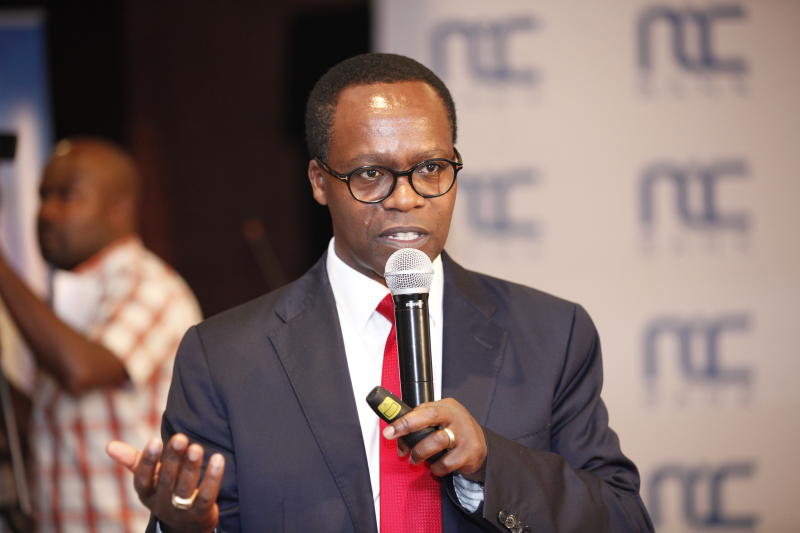 NCBA has become the first bank since the coronavirus pandemic hit Kenya to retrench workers, signaling tough times ahead for bankers.

After enduring crippling effects of the pandemic, the staff at NCBA will have a gloomy festive season with most of them praying they will not be among the unspecified number that will exit the payroll of the lender by end of the year.

The bank’s managing director John Gachora (pictured) attributed this painful decision to the negative impact of the pandemic on its balance sheet.

Mr Gachora said the uncertainty surrounding the pandemic has also forced them to reorganise its business model, with unspecified number of employees expected to go home in the next two months.

“Today, I announce that we are embarking on a process to reorganise our workforce which will result in reduction of staff headcount,” said Gachora in a statement to employees.

“For a company whose brand purpose is to inspire greatness, this is incredibly difficult to confront,” added Gachora.

The re-organisation will be done in two-folds, with the first phase entailing a voluntary exit programme (VEP) which will see employees who wish to exit the company to do so with a benefits package.

In the second phase, whose outcome will depend on the VEP, workers will be declared redundant.

Mr Gachora noted that the bank had since taken certain actions, including the reversal on an earlier recommendation to pay cash dividends to shareholders and early redemption of the bank’s medium term notes to save on interest payments. It has also closed more than a dozen branches where there was duplicity, in a bid to protect the future of the business.

With the outbreak of Covid-19 devastating the economy with a lot of businesses being flattened by the containment measures aimed at curbing the spread, banks have come in strongly by helping distressed borrowers to restructure their loans.

By the end of September, close to Sh1.3 trillion worth of loans had been restructured, a move that has seen Central Bank of Kenya (CBK) Governor Patrick Njoroge heap praises on lenders that he said were initially profit-driven than having a cordial relationship with the customer.

But this has also come at a price. Bank profitability has significantly reduced as most lenders set aside billions as insurance against possible defaults.

Apart from foregoing restructuring fees, banks have also not been earning fees on transactions from banks to mobile phones in what was aimed at encouraging cashless transactions.

CBK has since extended the emergency measures on mobile transactions, which also include a waiver on transactions of amounts of Sh1,000 and below, to the end of this year.

CBK reckons that this will entrench a cashless society in the post-Covid times, a situation that might have also informed NCBA’s restructuring.

Re-organising NCBA’s workforce, Gachora noted, was another means of protecting the future of the company.

He said while it was the intention of the bank to retain all staff from the combined entities of NIC and CBA, this was disrupted by the pandemic.

“We have had to defer our plans to scale our branch network and have taken unprecedented steps to support our customers in weathering this storm through loan moratoriums and fee waivers,” he said.

He noted that the recovery from the blow of the pandemic which has seen millions lose jobs will be slow. “There are businesses that may never re-open and many of our customers will require support for a longer period to come,” he explained.

Njoroge noted that the biggest threat to the economy remains the pandemic rather than the heightened political activities as the country prepares for a possible referendum and the 2022 elections.

Speaking to KTN News in an interview on Thursday, Njoroge said, unlike the risks posed by the rising political temperatures, there was still an element of surprise with the pandemic.

He said Kenya, having gone through a lot of political risks, had somewhat learnt how to deal with them. He termed the risks - including the US elections - as “known unknown”.

“Coronavirus is actually the one that is the unknown. The others are in the realm of known unknowns,” Njoroge said.

“We don’t know what it (coronavirus) could lead to. We don’t know how to measure the risks. It is the biggest unknown.”

After President Uhuru Kenyatta eased the Covid-19 containment measures following a dip in infection cases, the disease is rising again on what many have described as a second wave.

As a result, the president has called for an emergency meeting next week to discuss the latest development.

Gachora noted that one of the effects of the pandemic has been the change in bank customer behaviour.

“The future expansion of our Bank may look very different from what we imagined just a few months ago.

Now more than ever, we need a flatter, nimbler organisation that can withstand the challenges of the day, operate with greater competency and capture the opportunities of tomorrow. Hence the decision to kick off this program,” he said.

Even before the outbreak of Covid-19, a lot of banks had already embarked on digitizing their processes by reducing the number of branches, a situation that saw mobile phones and computers replace bank employees.

With Covid, a lot of banks were forced to close most of their branches, a move that will only aggravate a trend that had started earlier with financial institutions moving away from the brick and mortar model.

Previous article
Family feud brews sleepless nights for alcohol tycoon
Next article
Is this what awaits Kenyans in the summit?