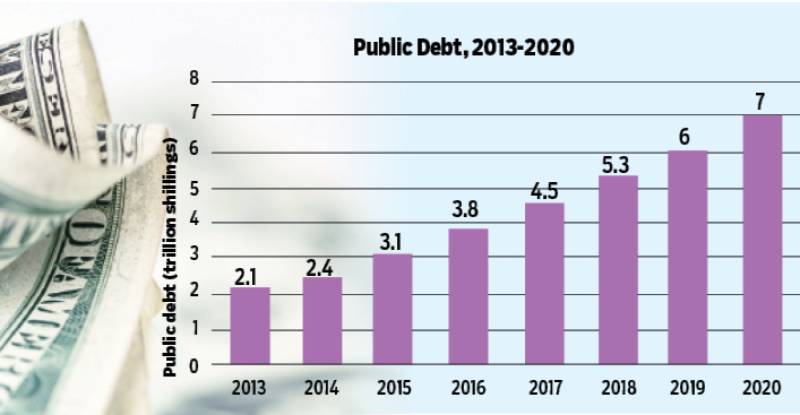 Kenya borrowed Sh374 billion in two months, pushing the country’s total public debt to more than Sh7 trillion by the end of August 2020.

Data from the Central Bank of Kenya (CBK) shows that nearly 60 per cent of the borrowed cash between July and August came from the domestic market, where Treasury got Sh224 billion.

At Sh7 trillion, this means that public debt is Sh2 trillion shy of the Sh9 trillion ceiling that Parliament set for the National Treasury.

Treasury has gone on a borrowing spree following the outbreak of Covid-19, which has disrupted economic activities and left the Government in a fix. Revenues are low but the State is still expected to help stimulate the economy.

Although a large chunk of the borrowing was from the domestic market, the share of local loans still trails that of external debt which stood at Sh3.66 trillion in the period under review.

External debt rose by Sh151 billion between July and August. In the last few months, the Government has received cheap loans from multilateral institutions, including the World Bank, the International Monetary Fund (IMF), and the African Development Bank.

Excluding grants, Treasury expects to borrow close to Sh1 trillion in the financial year ending June 2021. With this money, the Government can disburse a monthly stipend of Sh5,080 to 16.4 million poor Kenyans for a year, money that would be more than adequate for their dietary needs.

The money that Treasury expects to borrow from both local and foreign investors in 12 months from July, technically known as fiscal deficit or budget hole, had initially been estimated at Sh898 billion in the budget statement read by Treasury Cabinet Secretary Ukur Yatani in June.

Including grants, the budget hole to be plugged with loans is expected to rise to Sh951 billion from the earlier estimate of Sh841 billion.

This deficit, the shortfall between expected tax revenue and expenditure, will be plugged through both local and foreign borrowing of Sh554 billion and Sh397 billion, respectively.

But in the draft Budget Review and Outlook Paper (BROP), 2020, the budget hole was revised upwards due to the poor business environment. The woes saw Kenya Revenue Authority (KRA) collect fewer taxes in the FY2019/20, particularly in the fourth quarter.

The business environment was stifled by the containment measures instituted by the State to curb the spread of Covid-19. This saw Treasury revise downwards its earnings for the current financial year from Sh1.63 trillion announced in June to Sh1.52 trillion.

Consequently, the fiscal deficit as a percentage of the Gross Domestic Product (GDP) or total output, is expected to rise to 8.9 per cent in FY2020/21, higher than the eight per cent registered in FY2019/20.

Treasury noted that before the outbreak of Covid-19, it had started implementing belt-tightening measures aimed at reducing the debt levels, which have been careening to dangerous levels. This saw the IMF reclassify the country’s risk to default or ‘high’ from ‘modest.’

This austerity plan was premised on strong revenue growth, reduction of non-essential spending such as hospitality, tea, printing, advertising and a “gradual slowdown in the growth of public debt,” Treasury said.

“However, this path was interrupted by the outbreak and rapid spread of the Covid-19 pandemic,” said Treasury in the outlook, which sets the stage for the Government’s fiscal policies for the current financial year.

In his visit to France where he accompanied President Uhuru Kenyatta, the Treasury boss also signed loans valued at Sh18 billion with the Agence Française de Développement (AFD). The concessional loans will boost the supply of water, build rural roads and help fight Covid-19.

With reduced tax revenues, Kenya has been forced to go on a borrowing spree. Luckily for Treasury, most of the loans it has so far received have been cheap with a long tenor and grace periods as well as low interest rates.

Prior to Covid-19, Kenya had been under pressure to reduce its debt appetite. Mr Yatani, who had just replaced Henry Rotich, had aggressively launched austerity campaigns to reduce the country’s debt levels by discouraging non-essential spending and improving efficiency in revenue collection.

Yatani had also embarked on a mission to wean the country off expensive commercial loans, including sovereign bonds such as the Eurobonds, syndicated loans and supplier credits. This was meant to give the country breathing space in the repayment marathon that denied funds to critical development expenditures.

Previous article
How local farmers are losing the battle at the dinner table
Next article
Equal access to learning for both girls, boys key in unlocking continent’s potential