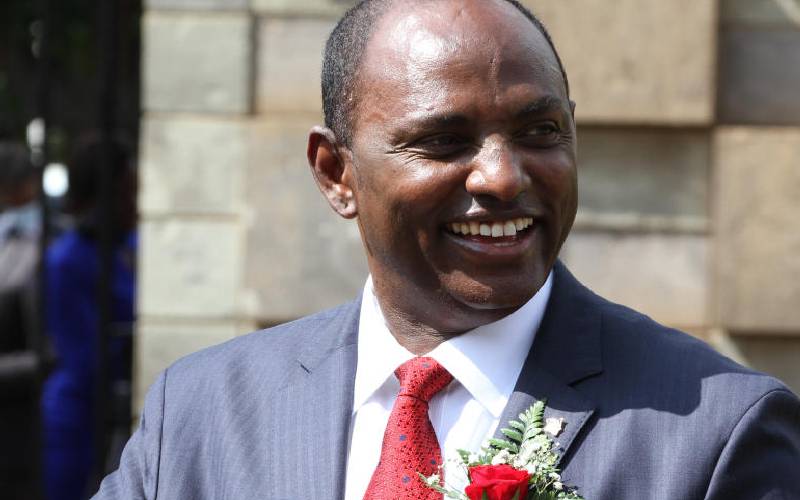 A confrontation is looming between the national and county governments following the State’s plan to slash Sh46 billion from the devolved units. Treasury Cabinet Secretary Ukur Yatani (pictured) is proposing the reduction in counties’ allocation in a move likely to disrupt services in the 47 administrative units. This comes as the Treasury seeks legislative amendments that will see the national government reach new heights in exercising autonomy over county budgets.

“The County Allocation of Revenue Act (CARA) 2019 provides for a total of Sh378.4 billion comprised of Sh316.5 billion for equitable share, Sh22.8 billion and Sh39 billion for conditional grants funded by the national government and development partners, respectively,” said Yatani in the latest revenue statements published in the Kenya Gazette. He said amendments to the Division of Revenue Act and County Allocation of Revenue Act 2019 have been submitted to Parliament with a proposed reduction of Sh30 billion in equitable share and Sh16.3 billion in conditional grants. This will see the 47 counties get Sh46.3 billion less than the allocation they were set to receive at the beginning of the 2020/21 financial year, worsening the cash crunch currently experienced. As at May 29, 2020, the Treasury had released Sh254.5 billion to counties, representing just 67 per cent of the total allocation for county governments for the 2019/2020 financial year. Council of Governors (CoG) Chairman Wycliffe Oparanya yesterday dismissed the proposal, terming it ill-informed and bound to fail.

“We are yet to be furnished with the proposal and we haven’t been consulted. But I assure you that if there is such a thing in the offing, those pushing it are day-dreaming. Anyone thinking of taking money from counties may be living on another planet and is not conversant with what is happening in the country,” said the Kakamega governor. He said the proposal is not acceptable and cannot happen, given the current financial health of counties due to the Covid-19 pandemic. “Counties can’t meet their obligations now because all had to revise their budgets to factor in money to deal with Covid-19. The money set aside so far by all the 47 devolved units is close to Sh7 billion. We are doing this with the hope that the Treasury releases what is due to us but, not think of reducing our allocation,” Oparanya said. He promised to reach out to President Uhuru Kenyatta to stop the proposal. “In our last meeting with the President, we agreed to work together to foster development in the country and fight Covid-19 as a team. It is surprising that a CS is playing games behind our backs. We will take him head on,” Oparanya said.

The Treasury, however, says the Sh15.5 billion counties get in direct disbursements from ministries and State departments will not be affected by the cuts.  These include Sh6.2 billion for the medical equipment leasing programme, Sh8.9 billion disbursed under the road maintenance fuel levy and Sh485 million for construction of county headquarters. Corruption allegations The medical equipment leasing programme has been riddled with corruption allegations and is subject to investigation by the Ethics and Anti-Corruption Commission (EACC). A majority of the governors have been opposed to the project, saying it was forced down their throats and continues to eat into their finances as they pay for the equipment. Part of the equipment is lying idle in the counties for lack of requisite personnel to operate them. The Treasury says the Kenya Revenue Authority (KRA) has missed tax collection targets for 2019/2020 by Sh478 billion, as the economic toll of Covid-19 rages. The taxman collected Sh1.3 trillion as at the end of May 29, 2020, against a target of Sh1.8 trillion set out at the beginning of the financial year. The loss of revenue comes on the back of months of depressed economic activity, as movement restrictions to stop the spread of the coronavirus led to businesses closing shop, many indefinitely. In April, the International Monetary Fund revised Kenya’s economic growth targets for 2020 to 1 per cent from the ambitious 6.1 per cent projected by the Treasury. While presenting the 2020/21 budget, Yatani told Parliament that revenue collection had shrunk considerably, owing to the pandemic and the Government expected the fiscal deficit to widen. “Our chosen fiscal consolidation plan has been adversely affected by the events over the last six months,” he said.  “In this respect we are now targeting a fiscal deficit of 8.3 per cent of gross domestic product (GDP) in financial year 2019/2020 from the previous target of 6.3 per cent of GDP.” The Parliamentary Budget Office also cautioned that the country’s budget deficit was growing to precarious levels with increased borrowing from the domestic market. “It is noted that there is a shift in the composition of borrowing whereby foreign borrowing will decline by Sh140 billion while domestic borrowing borrowing rises by Sh123 billion,” said the Parliamentary Budget Office in its review of the 2020/21 Finance Bill.

Barclays under probe on accusations of spying on staff