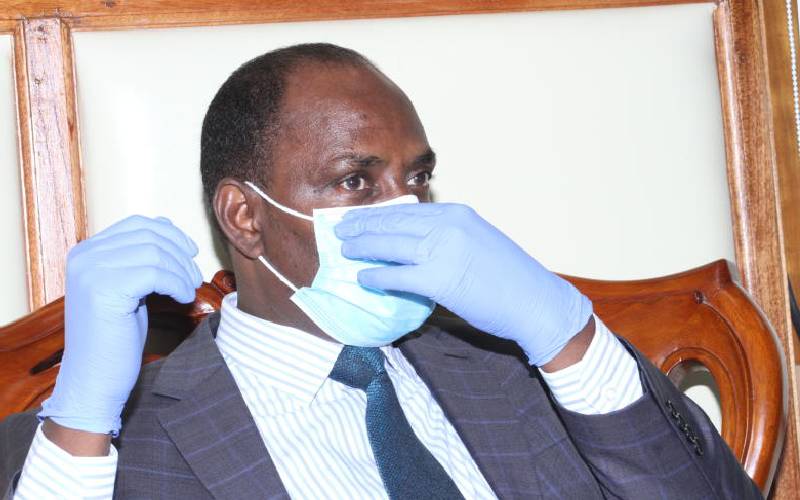 Kenya is operating on a shoe-string budget, spending nearly all its income with very little left for a rainy day.

Treasury Cabinet Secretary Ukur Yatani (pictured) told The Standard that Kenya's economy had little reserves to help it absorb the current shocks, forcing it to trim its budget and redirect resources towards the fight against coronavirus.

This has forced the State to adjust its budget and seek funds from outside as the country grapples with the pandemic.

"Kenyan economy is not that big. We do not have enough reserves to cushion ourselves,” said Mr Yatani in an interview.

As a result, the government has been scrapping for cash and resources from everywhere.

Besides seeking outside help from development partners such as the World Bank and International Monetary Fund (IMF), the National Treasury has received about Sh7.4 billion from the Central Bank of Kenya. The funds from CBK had been rendered useless at the end of the exercise to withdraw old Sh1,000 notes.

The World Bank and IMF will also give Kenya another Sh122 billion, complementing money that will be flowing into the Covid-19 emergency fund. Money saved from pay cuts taken by senior government officials and county chiefs will be channelled to the fund.

Yesterday, President Uhuru Kenyatta directed the National Treasury to utilise Sh2 billion recovered from corruption proceeds to support the most vulnerable members of the society.

Yatani noted that there are some countries, particularly resource-endowed, which have fat emergency kitties which they draw from in case of any shock.

He said this even as it became apparent that the government had only Sh2.8 billion in its accounts by the end of February, which was too little to help it combat the effects of coronavirus.

"When such a situation happens, since we do not have adequate reserves, what do we do? We have to revise our taxes with the view of giving incentives to the industries to stay afloat,” said Yatani.

Kenya being a young economy that is still grappling with how to feed its population and trying to grow, the impact of the pandemic, said Yatani, is heavy.

He said the level of anxiety the crisis has created is beyond control, citing the stock exchange which has seen investors lose billions within a short time.

Fearing that the pandemic might snowball into a full-blown health crisis, President Kenyatta has instituted stringent measures, among them the imposition of a 7pm to 5am curfew.

Schools, pubs, nightclubs, and other entertainment joints have since been closed. Workers have been forced to work from home, leaving matatus and restaurants without customers.

Around the country, open-air markets, where most poor people buy their food, are increasingly being closed by county governments.

The supply chain has been seriously affected, particularly from China where the country gets 21 per cent of its imports.

Export of flowers and tea has also been curtailed.

“These are disrupted. And therefore we are staring at very difficult times of possible loss of jobs, loss of income, and loss of livelihoods,” said Yatani.

How graft is turning Kenya into a graveyard for startups

Kenya secures over Sh17b in debt relief from rich nations