Like others before him, Kebs boss just won’t sit pretty

Money & Careers
For years, Kebs has struggled to retain a chief executive. 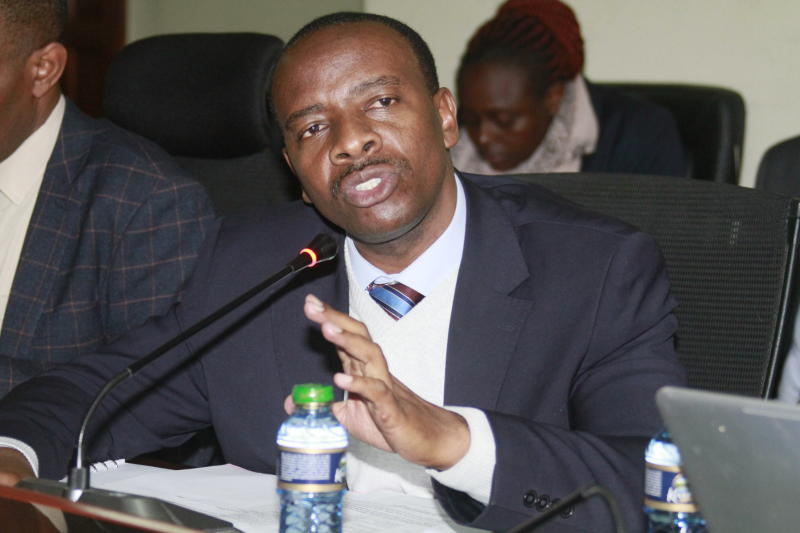 Barely a year after taking over at the Kenya Bureau of Standards (Kebs) Bernard Njiraini (pictured) is facing a mountain of challenges restoring public confidence in the institution mandated to ensure safety of products. Mr Njiraini, a former military officer, was picked last August to head the crucial department. And like many of his predecessors, he is facing familiar hurdles including what he terms “fight back by cartels”. The MD is currently under investigations by the Ethics and Anti-Corruption Commission (EACC) and Directorate of Criminal Investigations (DCI).

EACC is pursuing allegations of graft while DCI is probing claims that the new chief had threatened one of his juniors. Lucrative contract The Public Procurement Regulatory Authority has also been investigating allegations of bias in the multi-billion shillings contract to provide inspection services on behalf of Kebs. Last December, the standards bureau announced plans to bring more inspectors on board to help in the inspection of goods before they leave their country of origin into Kenya. Kebs called for interested bidders to submit their applications to offer Pre-Export Verification of Conformity (PVoC) of Standards services for general goods, used motor vehicles, mobile equipment and spare parts. This would mean that all goods will be inspected in their country of origin.

Njiraini says it is after this tender was floated that his woes began. However, a senior source at Integrity Centre said EACC had issued summons to top Kebs officials asking them to present themselves on Monday. “Those summoned said they were out of town and could not appear,“ said the official who requested anonymity. The doors at the Kebs headquarters in Nairobi’s South C have opened several times over the last decade for new MDs. But they have also enhanced their early exits, leaving a trail of fractured corporate careers. The job of a Kebs MD appears too hot for many. For years, Kebs has struggled to retain a chief executive, with every one that occupied this office in recent years hounded out before their term ends.

Over the last 10 years, none of the MDs has held the job for a complete term. The holders of this office work on a three-year renewable contract. For some like Charles Ongwae, they are not only hounded out of office they have to fight cases in court too. Mr Ongwae joined Kebs in 2014 from Barclays Bank Uganda where he was the MD. With 14 others, Ongwae has been charged with 31 counts of fraud and abuse of office over an alleged tax evasion scheme that saw the government lose Sh64 million in revenue. Njiraini took over from Bernard Nguyo, who succeeded Ongwae and held the job in an acting capacity.

In an interview with Financial Standard in January, Njiraini acknowledged that many holders of this office had been ejected in a nasty way. “Yes, a number of my predecessors have exited the organisation nastily. From my short tenure in office, I have realised it requires a strong personality and leadership, deeply rooted in ethical corporate governance guided by high moral values and integrity,“ he said. Moses Ikiara served as acting MD at the same time he was CEO at Kenya Investments Authority (KenInvest). He left and said having two CEO jobs was too taxing. The bureau’s board had to re-advertise the MD’s job in July last year, five months after it had first asked interested candidates to apply in an indication that it’s earlier call may not have attracted the right applicants. Kebs has experienced more than a decade of MDs being kicked out of office, with late Kioko Mang’eli starting what has been a tumultuous decade for top shots at the bureau.

He had stayed at the helm of the agency longer than many of his predecessors and even those who came after him. Illegal hiring Mr Mang’eli left the standards body on allegations of illegal hiring and corruption, as well as a faking of a payslip to justify his pay. He was replaced by Joel Kioko in an acting capacity before Joseph Koskey was appointed as a substantive MD. Koskey, however, did not last long and was sacked in 2011, a year after his appointment. He was succeeded by Eva Oduor in January 2012. Ms Owuor would in August 2013 be fired over the award of a Sh1.3 billion tender for construction of Kebs’ offices and laboratories in Mombasa. The tender was later cancelled but a report by the Auditor General would later note that the contract had been awarded irregularly. Its termination, the Auditor General said, was also done illegally. She was replaced by Charles Gichahi in an interim capacity. In January 2014, Ongwae took over in a substantive capacity.