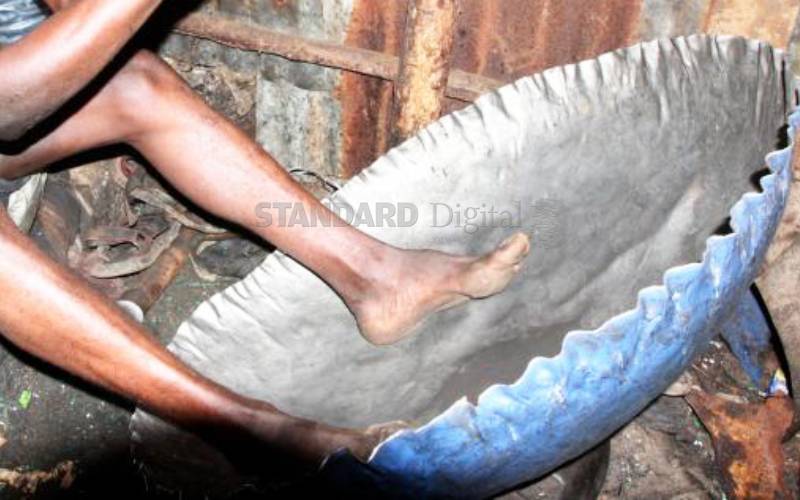 On July 29, 2002, Aba Mpesha walked into the Westlands branch of Giro Bank clutching personal documents and a Sh5,000 deposit to open an account. Branch manager Jignesh Desai exclusively supervised the opening of the business account under the name Mpesha Enterprises, which allegedly dealt in horticultural products. According to Desai, Mpesha said he had been referred to him by one Khimji Patel, alias Ashok Patel, who was allegedly a Giro customer.

This was the beginning of an elaborate criminal scheme in which Mpesha Ltd – a briefcase company – was set up as a conduit to siphon millions of shillings from the Central Bank of Kenya (CBK) through the fraudulent sale of Treasury bonds. According to the CBK, the account was opened “in the most casual manner without due consideration of such matters as a bank is bound in the normal course of business.” Mpesha Enterprises had no permanent address, there was no introduction letter authored by Khimji, and there was no tax personal identification number as required by law. The account holder was also indicated as John Mbuu. When the racket was eventually busted and the matter went to court, it was revealed that Mpesha’s real name was Alex Ribero Ngugi and he had worked with Barclays Bank from November 3, 1987 to mid-1997 as a cashier before he lost his job and went into ‘jua kali’ (informal business).

The court heard that Giro sought customer verification from Barclays six months after the account was opened. During this period, the account had been dormant but this changed on January 21, 2003 when a Sh50,000 deposit was made.

Then the taps opened. On February 7, 2003, Sh95 million was transferred to the account by order of Dyer Blair Investment Bank, through Stanbic Bank. The explanation given was that the money was from the sale of Treasury bonds. Mpesha immediately withdrew Sh16.5 million in cash and transferred Sh41 million in five separate banker’s cheques to Fina Bank. He also transferred Sh8 million to Paramount Universal Bank. He paid Sh1.8 million and a further Sh924,000 to Blue Sea Forex Bureau and Travellers Forex Bureau. The account was swiftly drained and seven days later, only Sh755,174 was left. On February 24, 2003, another Sh90 million came from Dyer and Blair. This time, Mpesha withdrew Sh6.5 million in cash, transferred Sh50 million via banker’s cheques to Fina Bank and sent Sh1.5 million to Travellers Forex Bureau. Sh13.5 million was paid by a series of banker’s cheques to Paramount Bank.

He then deposited Sh15 million in a Giro business account named Johmat Distributors Ltd that was owned by John Mwangi. These deposits also came up in court when Justice George Odunga noted that bank officials ought to have realised that money was flowing in from stockbroking and not horticulture. In actual fact, as would later be gleaned, the deposits were proceeds from fraudulently procured Treasury Bonds Issue Nos. FXT 2/2002/2 and FXD 1/2002/4 in the names of CBA Capital Ltd and Mumbu Holdings Ltd, respectively. The con game began on January 28, 2003 when T-bonds for CBA Capital valued at Sh175 million were transferred from their Central Depository System (CDS) account to Mpesha’s account. Two months later, on April 3, T-bonds for Mumbu Holdings valued at Sh30 million were also transferred from their CDS account to Mpesha’s account. The scam would be exposed the following month when Mumbu Holdings attempted to offer their Treasury bonds for sale only to learn that they had been transferred. The firm, however, selling the T-bonds prompting an investigation that was led by Peter Ng’ang’a. After generating a statement, the trail led to Mpesha’s account where the CBA Capital transaction was also unearthed.

According to Mr Ng’ang’a, a former police officer who rose to the rank of inspector in the Banking Fraud Investigation Unit (BFIU), they placed an advertisement in the newspapers seeking for the proprietor of Mpesha Enterprises. The man who presented himself to the BFIU offices, however, identified himself as Ribero. Desai, Ribero and Mwangi were arrested and charged. Only Ribero was convicted of forgery and theft and jailed for three years while Desai and Mwangi were acquitted. The CBK then launched a civil suit against Ribero, Mwangi and Desai in a bid to recover the lost money. The case dragged on for 15 years until December 18 last year when Justice Odunga ordered Desai and Ribero to pay back the Sh205 million plus interest until fully settled. The judge, however, found that while the two men were at the heart of the nefarious scheme, none of the witnesses could link Mwangi to the crime. Justice Odunga found that the branch manager failed to raise the alarm on the operations of Mpesha’s account and never inquired about the source of the deposits. “While there is nothing unlawful about one being in business and also trading in stocks, the manner in which the subject account was being operated ought to have raised a red flag on the part of the second defendant (Desai) who, if prudent, ought to have made inquiries as to whether the said credits were genuine. By failing to do so, one can only conclude that the second defendant was part of the conspiracy to launder the said fraudulently obtained sums of money and facilitate their being paid out to various avenues.” During the hearing of the case, Desai had claimed that Ribero was introduced to him by Ashok, a bank customer who operated a night club and had a trading account called Fullhouse Entertainment Company. But in a prior police statement recorded on July 5, 2003, it was revealed that he admitted to participating in the theft plot.

According to court documents, Desai said he met Mwangi at Exotica Hotel, who then introduced him to Ribero. Mwangi allegedly told Desai that Ribero would open an account at Giro Bank in the name of Mpesha Enterprises. On the day, the manager claimed, Ribero and Ashok came to the bank and opened the account. It also emerged that in 2003, Desai had opened a deposit account at Citi Bank, Dubai, which received $450,000 (Sh45 million in today’s rate) from an unknown source. He revealed the account’s existence during questioning by police and claimed it was meant for his savings and his wife’s inheritance. Desai told the court he never inquired about the source of the money. Ribero was found by the court to have hatched the plan to steal the T-bonds and executed it to the end. “Regarding the third defendant’s liability, it is clear that he orchestrated, whether on his own or through the influence of others, a fraud sometime in 2003 whereby he falsely and fraudulently procured Treasury Bonds Issues Nos. FXT 2/2002/2 valued at Sh175 million and FXD 1/2-02/4 valued at Sh30 million in the names of CBA Capital Ltd and Mumbu Holdings Ltd, respectively, and transferred the same to a CDS account opened by himself,” Justice Odunga ruled.