Uhuru backs down on plan to impose housing tax 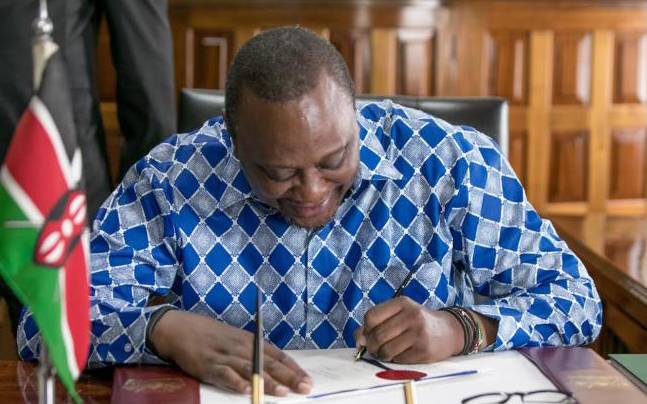 President Uhuru Kenyatta (pictured) has backed down on a plan to impose a 1.5 per cent housing levy on all salaried Kenyans to finance his affordable housing flagship project. Instead, Uhuru yesterday announced that the contribution will now be voluntary. The decision follows numerous court injunctions that have stalled the implementation of the project, which is part of Uhuru's Big Four Agenda.

Consequently, the president directed the National Treasury and the Housing ministry to revise the legal requirement to the Housing Fund Levy to make it voluntary with immediate effect. “In this regard, and to ensure that the implementation of the programme is not derailed any further, I hereby direct and order that the National Treasury and the ministry responsible for housing moves to Parliament a revision to the legal requirement in respect to the Housing Fund Levy to make the contribution voluntary with immediate effect,” said Uhuru during the Jamhuri Day celebrations at Nyayo Stadium, Nairobi. The creation of the Housing Fund was informed by the need to bridge the housing gap between the rich and the poor by creating a framework through which the traditionally unbanked can access financing towards home ownership. But Uhuru acknowledged that the implementation of the Housing Fund Levy as a mandatory contribution for both employees and employers has been fraught with what he described as  an “avalanche of legal hurdles and obstacles”. He said the decision to make it voluntary was to shield it from further legal battles as his administration continues to soldier on with what he described as “a noble programme”.

Early this year, the Employment and Labour Relations Court suspended the formation of an advisory board to run and manage the housing fund. The project, which was scheduled to begin in June 2018, was initially delayed by what State officials said was the complex planning and logistics. Uhuru further announced plans to address the tax burden affecting operations of small and medium business enterprises. He said his administration will reduce or eliminate a raft of charges by various State agencies so as to support business and accelerate economic transformation. He ordered the National Treasury and the Kenya Revenue Authority (KRA) to review the country’s tax structures, especially those touching on small businesses. This, he said, will reduce the tax burden while fostering tax compliance.

To reduce tax compliance burden on employers, Uhuru ordered that all employers contributions/deductions for the National Social Security Fund, National Hospital Insurance Fund, Pay As You Earn and National Industrial Training Authority levy be made through a unified payroll return submitted to KRA.