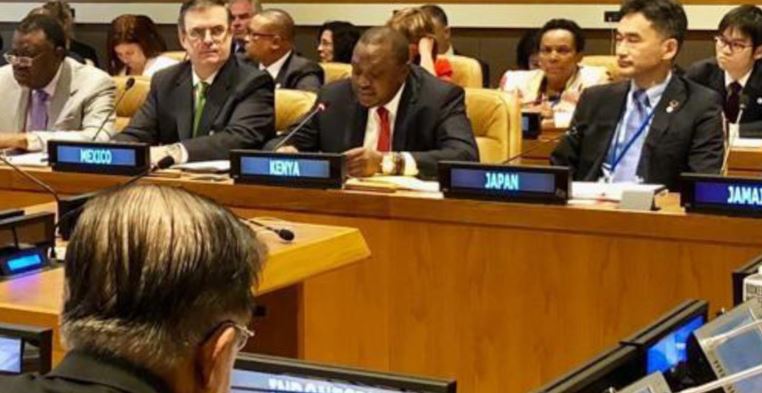 President Uhuru Kenyatta has called on world leaders to develop joint interventions aimed at ensuring sustainable utilisation of ocean resources. The President said no single nation could sustainably manage oceans on its own because two-thirds of global waters lie in areas beyond national jurisdiction (ABNJ) of economic exclusive zones. He said the action in one sea would have a positive or negative effect on other seas adding that success in managing global aquatic resources largely depends on nations working together.

SEE ALSO: "No masks, no gloves": State under fire over quarantine centres

He spoke during a high-level panel discussion on sustainable ocean economy held on the sidelines of the ongoing United Nations General Assembly (UNGA) in New York where he rallied world leaders to unite towards sustainable ocean economy. "We are here to make a new compact and use our collective influence and moral persuasion, buttressed by strong scientific evidence, to galvanize global action in support of this compact," the President said. He welcomed findings of a recent scientific study which shows that ocean-based climate action could deliver up to 21 per cent of the annual greenhouse gas emission cuts needed by 2050 to keep global temperature rises below 1.5 degrees centigrade. President Uhuru cautioned against human actions that threaten the wellbeing of oceans saying the water bodies hold huge economic potential with an asset base estimated to be over 24 trillion USD dollars. "But our actions have put the ocean systems under immense stress and compromised their ability to act as the heart of the planet," the President said, adding that the world dumps more than eight million tons of plastics into the ocean each year which negatively impact marine ecosystems.

He called for an urgent mechanism that will compel nations to build ocean-based economies which help reduce emissions while providing jobs, supporting food security and sustaining biological diversity. "The compact needs to strengthen the law of the sea to hold countries accountable, to make communities key stakeholders and beneficiaries and to be accompanied by a time-bound implementation framework beyond 2020," he emphasized. The President said it is in recognition of the importance that oceans play in the wellbeing of global economies that Kenya, Japan and Canada co-hosted the first-ever global conference on sustainable blue economy in Nairobi in November last year. He added that Kenya and Portugal will co-host the next UN Ocean Conference in June 2020. Later, President Kenyatta held separate talks with the President of Hungary Janis Ader and the Director-General of United Nations Industrial Development Organization (UNIDO) LI Yong.

SEE ALSO: I gave my son a dressing down for breaking Covid-19 rules, says President Uhuru

The President and his Hungarian counterpart discussed several matters of bilateral and multilateral interest between the two countries including trade and people-to-people interactions. The two leaders further discussed Kenya's bid for a non-permanent seat on the UN Security Council for the period 2021 to 2022 which the Hungarian leader assured of his country’s support.