Presidency on spending spree despite tough talk on austerity 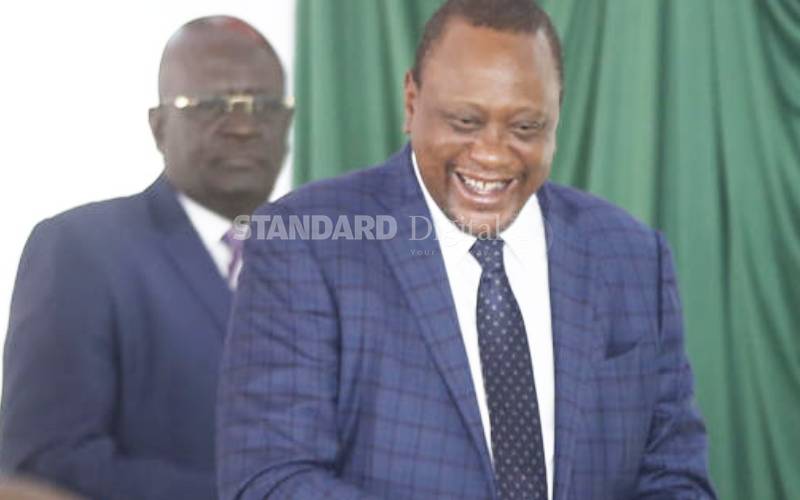 President Uhuru Kenyatta’s austerity plan took a backseat in the 12 months to June, as his office and MPs splurged taxpayers’ money on foreign trips. A new report from the Office of Controller of Budget shows that the Presidency –­ which includes the offices of the Head of State (pictured) and his deputy –­ spent Sh197 million on foreign trips, nearly double what it spent on such travels in the previous financial year. Members of the National Assembly – whose recent trip to the US ignited public anger – used Sh1.6 billion on overseas trips, more than double the Sh719 million they spent on the item in the 2017/18 financial year.

Travel to the US

Some 85 lawmakers and their support staff reportedly travelled to the US on August 5, where National Assembly Speaker Justin Muturi and his Senate counterpart Ken Lusaka led the delegation. This, even as the country grappled with a cash crunch that saw farmers go for months without cheap fertiliser.   The latest surge in expenditure items is an indictment on the President’s commitment on austerity plan, which some critics have described as a public relations exercise aimed at hoodwinking investors. In recent years, the Treasury has proposed policies aimed at slashing expenditure on non-essential items, even as it cranks up tax revenues. But despite the tough talk on austerity, the report, the last by the outgoing Controller of Budget Agnes Odhiambo, shows that MPs’ salaries and allowances increased by Sh2 billion to reach Sh11.2 billion during this period.

Generally, State corporations spent more on foreign travel, conferences, training and domestic travel, making a mockery of Government’s objective of trimming its budget. Expenditure on hospitality by all the ministries, departments and agencies (MDAs) also doubled to Sh9.8 billion during this period, from Sh4.7 billion in 2017/18 Financial Year. Uhuru has been on the forefront pushing for a lean budget that has seen some development projects frozen, save for those related to his Big Four agenda. However, last year, the Government found it difficult to stick to its own austerity plan, borrowing an additional Sh114 billion in the last financial year as increased wages and interest payments ate into most of the taxes.

“Analysis of the recurrent expenditure shows that a total Sh423 billion was spent on personal emoluments (PE) where the Teachers Service Commission recorded the highest expenditure on PE at Sh239.2 billion, translating to 56.5 per cent of the total PE expenditures by all MDAs,” said Odhiambo in the Annual National Government Budget Implementation Report for FY 2018/19.

The expenditure on salaries and allowances during this period showed a 12 per cent increase, from Sh377.7 billion that was spent on personnel emoluments. Recurrent expenditure –­ spending on salaries and administrative costs –­ increased to Sh1 trillion, up from Sh913 billion recorded the previous year, even as taxes stagnated.

As a result, the country's fiscal deficit –­ the difference between revenues and expenditure –­ widened to 7.4 per cent of GDP, a situation that saw the country’s stock of public and publicly guaranteed debt surge to Sh5.81 trillion. The National Treasury borrowed Sh770 billion in the 2018/19 financial year that ended in June, against an initial target of Sh635.5 billion, or 6.3 per cent of the GDP, as increased wages and interest on loans forced the country back into the debt market. This was a growth of 15.2 per cent from Sh5.039 trillion recorded in the previous year to Sh5.8 trillion debt in the period under review. Last week, acting Treasury Cabinet Secretary Ukur Yatani said that the Government will cut unnecessary expenditure, such as foreign trips and advertising by Government departments to bridge fiscal deficit. “The cuts will be brutal and will be sustained,” Mr Yatani told a meeting to plan the government’s budget for the next fiscal year, adding that he expected the deficit to drop to 3.5 per cent of GDP by the 2022/23 fiscal year. For the current Financial Year, the Treasury unveiled a raft of austerity measures, including the freezing of further recruitment of civil servants, except for key technical staff, security personnel, teachers and health workers.  The Government will also not extend the service of thousands of civil servants set to retire after attaining the age of 60.  Moreover, Treasury announced plans to undertake another purge on the Government payroll to weed out ghost workers. The CS also acknowledged that the Government had been leasing office space at higher than market rates, resulting in huge costs.