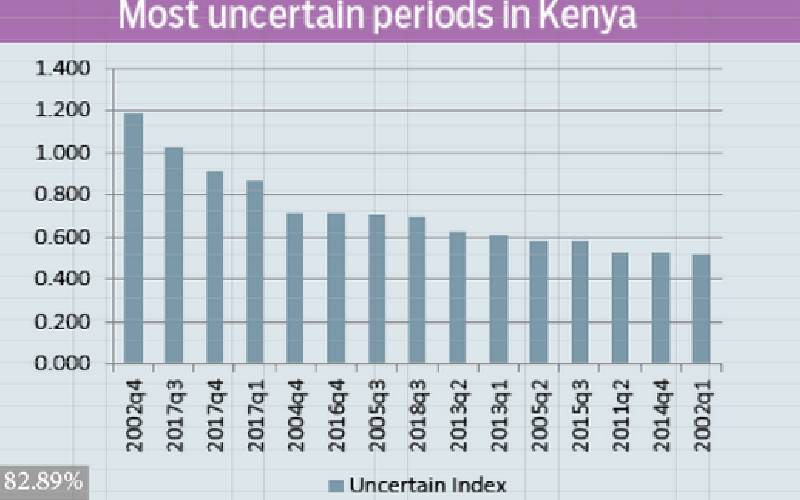 Kenya was ranked as having the second-worst business environment in the world in the run-up to the 2017 general election, according to a new survey. Developed by the International Monetary Fund (IMF), the World Uncertainty Index (WUI) released yesterday shows that only South Africa fared worse than Kenya in the world between July and October 2017. After the elections in the fourth quarter, the index shows, the uncertainty declined slightly, but it was not until after the so-called handshake between President Uhuru Kenyatta and Opposition leader Raila Odinga in the third quarter of last year that investors felt at ease to put their money in the country. The index shows that things have been generally calm in the first six months of this year.

However, uncertainty rose almost four-fold in the second quarter in what can be attributed to the Government crackdown that must have left investors jittery. However, the readings are not near the 2017 and 2002 levels. In the fourth quarter of 2002, the business climate in Kenya was the most uncertain in the world, confirming findings that elections in the country have tended to depress growth as investors develop a wait-and-see approach.   The IMF team came up with the WUI as a means to measure economic and political uncertainty among 143 countries that represent 99 per cent of the world’s gross domestic product (GDP). “Concerns about uncertainty have increased all around the world since the global financial crisis. For example, IMF country reports suggest that uncertainty has recently been a key factor of weaker economic performance in many economies,” says part of the report. “Until now, however, progress to measure economic and political uncertainty has been made only for a set of mostly, advanced economies.”

Uncertainty in different countries is informed by different events, for example, the terrorist attacks of September 11 in the US created a lot of nervousness in the world. In Kenya, the electioneering period is one of the main sources of uncertainty, with investors fearing an outbreak of war such as in the aftermath of the 2007 elections. Kenyans went to the polls twice in 2017, in August and October, after the Supreme Court annulled President Kenyatta’s win. This had a crippling effect on the economy which grew by 4.9 per cent, the worst since President Kenyatta took over the reins of power in 2013.