How did the Amazon rainforest fire start? Brazilian president blames NGOs for blaze 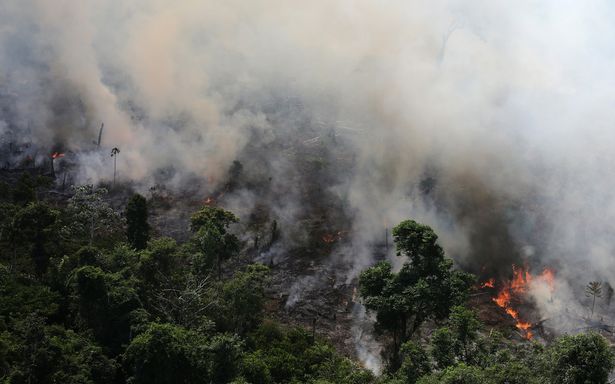 Brazilian President Jair Bolsonaro has suggested that non-governmental organisations (NGOs) could be to blame for the massive fires raging in the Amazon rainforest.

In a Facebook Live on Wednesday, Bolsonaro said, "Everything indicates" that NGOs are setting fire to the forest to bring shame on his government, after he cut their funding.

When asked if he had evidence to back up his claims, he said he had "no written plan," adding "that is not how it is done."

The accusation comes after Bolsonaro - described as the 'Donald Trump of the tropics' - came under fire himself for his administration's attitude towards the Amazon rainforest.

The president has vowed to develop the Amazon region for farming and mining, ignoring international concern over increased deforestation.

How did the wildfires start?

Sometimes, fires occur naturally, ignited by heat from the sun or a lightning strike. However, the majority of wildfires are the result of human carelessness.

The Amazon has seen a record number of fires this year, with the country's space agency reporting an 83 per cent increase over the same period last year.

According to the National Institute for Space Research (INPE), the large number of wildfires cannot be attributed to the dry season or natural phenomena alone.

"There is nothing abnormal about the climate this year or the rainfall in the Amazon region, which is just a little below average," said INPE researcher Alberto Setzer.

"The dry season creates the favourable conditions for the use and spread of fire, but starting a fire is the work of humans, either deliberately or by accident."

In the Amazon, some farmers deliberately set fire to the forest, in order to clear the land for cattle ranching - a practice which is highly illegal.

Why do wildfires spread so quickly?

Wildfires in the Amazon usually occur during droughts.

As trees have less water during droughts, their growth slows and they are less able to remove carbon dioxide from the atmosphere through photosynthesis.

Trees then shed extra leaves or even die, which means more wood and leaves are ready to burn on the forest floor.

Without a dense canopy to retain moisture, the forest loses some of the humidity, which acted as natural fire prevention.

These changes are exacerbated by “selective logging” of specific tree species, which opens up the canopy and further dries out the understory and forest edges, which are drier than the interiors.

Researchers claim that climate change and deforestation are both the blame for increases in the intensity and frequency of droughts in the Amazon region.

Traders along Jogoo Road a risk to motorists, residents say

Traders along Jogoo Road a risk to motorists, residents say