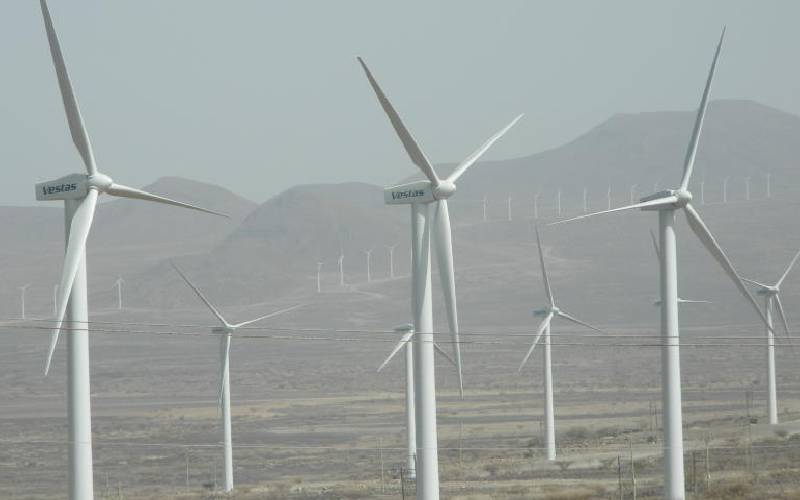 The crisis had arrived. No one saw it coming, and the next thing they knew, it was threatening to dim the prospects of Africa’s largest wind power plant in northern Kenya.

When the Kenya Electricity Transmission Company (Ketraco) board members finally met, only one item was on the agenda: what’s the way out?

The year was 2017 and all eyes were on Ketraco, which was by now a year late in delivering the 435km Loiyangalani-Suswa transmission line linking Lake Turkana wind farm to the national grid.

The project had stalled in as many months, with billions of shillings already having been spent.

But the delay had less to do with Ketraco and more with the contracted Spanish company, Isolux Corsan, whose government happened to be the project financier through State loans.

The company had run into financial headwinds mid-way through the project and filed for insolvency at a time when Spain was sliding into recession.

It had a ripple effect that shook local firms subcontracted for parts of the job.

Back at the board meeting, around the room swirled the forces of desperation and urgency, brows being wiped and voices on edge.

A decision had to be made, fast. But they were at a crossroads and had to linger a bit to carefully examine the options on the table.

Terminating the contract with Isolux would mean forgetting about the Spanish government’s concessionary funding.

Where would an alternative foreign credit line come from on such a short notice?

On the other hand, sticking it out meant even more delays, something that would result in hefty fines to the developers of the Turkana wind farm who had completed construction ahead of the line.

Yet, the high-voltage overhead line was supposed to come on-stream ahead of the plant as per contractual agreements.

The 310MW wind plant was completed mid-2017 but could not start producing power since, by then, the delayed transmission line had stalled halfway.

It was the missing link that saw taxpayers part with Sh5.7 billion in fines, the figure of which would have ballooned further had the delays not been contained.

Weighing options, none of which was straightforward, the Ketraco board unanimously agreed to pull the plug on the contract in August 2017, transferring the remaining financing burden directly to taxpayers.

As expected, Isolux would hear none of it and swiftly petitioned the move in court. It lost the case.

Out with the Spaniard contractor and in marched a consortium of Chinese firms - Nari Group Corporation and Power China Guizhou Engineering Company.

It would, however, not be a walk in the park for the Chinese contractors. They had strictly eight months to finish the other half of the job across the wilderness, the first part of which had taken the earlier contractor three years.

Ketraco re-awarded the contract to the Chinese consortium on January 30, last year, with the deadline being August 31 of the same year.

To ensure they kept the narrow deadline, Ketraco introduced a condition requiring the firms to pay a fine of Sh1.3 billion per month should they fail to meet the eight-month timeline.

The consortium would go on to complete the task, just hours to the deadline, against all odds, enduring a harsh rolling terrain, slithering with snakes and scorpions as well as the ever-present risk of flash floods.

Day and night, the army of workers toiled flat out. What had taken the earlier contractor almost three years had been achieved within eight months, in a classic fashion of Parkinson’s law – work expands or shrinks to fill the time available for its completion.

Just how was it pulled off? When Isolux got dropped as the engineering, procurement and construction contractor towards the end of 2017, no stringing works had been done over the 435km stretch traversing Marsabit, home to Lake Turkana wind plant and the largest county.

By that time, and three years into the job, the Spanish company had only managed to erect 430 towers, out of the needed 991 towers. It had been awarded the contract in August 2014 with the agreement being to complete the work over a 26-month period to October 2016, a target that was grossly breached.

Enters Nari Group on January 30, 2018, and things take a bright turn, with the nimbler firm hitting the ground running.

Design, procurement and manufacturing orders of required parts and equipment were done in the first three months.

Then materials landed at the Mombasa port from April loaded in 1,100 containers and were transported via the standard gauge railway to Nairobi and later by trucks to the makeshift camps along the transmission line. Some of it had to be airlifted.

The next task was to mobilise specialised workers from China and process their work permits ahead of construction, a task that involved erecting towers also known as pylons, stringing, inspection and testing works.

It wasn’t until May 1, last year that actual construction works started, four months to the blinking deadline.

By this time, local subcontractors had completed all foundations and erected 148 towers, leaving Nari to complete the erection of 413 towers as a matter of urgency and string the conductors a distance of 434.6km, along the 991 towers.

To this end, the Chinese contractors completed construction works in a record four months. Such speed and logistical execution have not been witnessed anywhere else in the region for a project of such magnitude.

In normal project implementation, tower foundation to the stringing of a 10km stretch of a similar line (voltage and terrain) takes about a month, on average, according to Ketraco.

Yet, the two Chinese firms managed to build pylons and do the stringing over 435km in only four months, translating to 108km a month, as opposed to to the conventional 10km.

To complete the works on time, the contractors incorporated state-of-the-art machinery and technique, including the use of drones for stringing, a new concept in the region.

But even then, all this wouldn’t have been possible without the coordination of multiple local government agencies who worked in concert throughout the project’s tight schedule.

“KRA (Kenya Revenue Authority) expedited clearance of the cargo at the port, while Kenya Ports Authority facilitated the movement of cargo from vessels directly to the SGR railway. Kenya Railways, on its part, gave us priority in the movement of the cargo,” said Mr Barasa.

While the Chinese consortium completed the 400kV Loiyangalani-Suswa transmission line, the subsequent substations in Loiyangalani and Suswa fell under the workmanship of German firm Siemens.

Finally, and with much fanfare accompanied with a hint of disbelief, the double circuit line with a capacity to carry 1,200MW went live in September last year, enabling injection of cheap, green wind energy into the grid.

“The deadline for this project was very difficult. Our vast experience all over the world in mega projects was summoned to ensure we meet the deadline,” said Chen Chao, the general manager, Nari.

But the swift delivery was far from smooth. There were multiple hoops to jump through along the way and balls to juggle.

First, there was the issue of insecurity from hostile pastoralist communities who, occasionally, attacked workers and vandalised transmission infrastructure, including in the dreaded Baragoi Valley, swarming with trigger-happy bandits.

At the same time, the harsh terrain saw workers endure tough conditions with limited access to water, electricity and communication owing to the poor infrastructure in the South Horr region.

Weather challenges, including floods, added to the logistical nightmare as did the strong gales in the Turkana wind corridor that made the exercise of mounting pylons and overhead conductors as dicey as it could get.

Further, the transmission project was plagued by wayleave acquisition challenges that saw manyattas (makeshift traditional huts) sprout overnight from nowhere, slowing the contractors’ access to the right of way.

The communities demanded ridiculously inflated compensations. Some, gun in hand and without batting an eyelid, claimed millions for a manyatta hardly valued at Sh1,000.

And besides the insolvency by the Spanish contractor, the project implementation ran into further delays with the withdrawal of original financing by the Spanish Government. This prompted urgent re-tendering for a new contractor and arranging new financing.

The line comes along with several far-reaching benefits.

Besides the lower electricity tariffs (Sh8 per unit), through the line, the wind farm stands to save the country at least $150 million (Sh15 billion) annually on fuel imports used to generate thermal electricity.

The exchequer also stands to benefit as the developers’ tax contribution is estimated at Sh2.7 billion per year and Sh58.6 billion over the life of the investment.

The plant is registered with the UN Framework Convention on Climate Change (UNFCCC). Approved at the Gold Standard rating, it stands to earn the developers Sh23 billion in carbon credits over the life of the project (20 years).

Turkana wind plant is equally a reliable alternative for hydropower during bouts of prolonged drought when hydroelectric generation drops steeply, as was recently the case, cushioning the economy from rolling blackouts.

Additionally, the fibre optic cable strung along the transmission line will ensure broadband connectivity in areas where the line traverses under an arrangement between Ketraco and internet service providers.

It was constructed with foresight as it will in future be used to evacuate power from other renewable sources in northern Kenya, including solar.

This is exactly why the line has a capacity to carry up to 1,200MW, yet Turkana wind farm has a maximum capacity of 310MW.

The project cost Sh28 billion after significantly suffering cost overruns as a result of the delays and mid-way re-tendering.