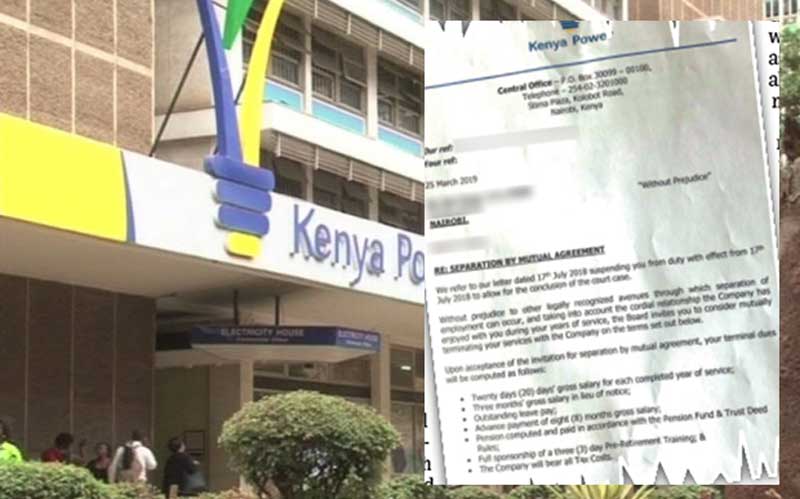 Fifteen top managers who have been suspended from Kenya Power (KP) may be paid more than Sh200 million in a deal designed to get rid of them.

The 15 are facing graft charges. Kenya Power board will this morning review the managers' responses to the deal offered them last week.

The offer by the board, which expires today, will see the least paid manager take home at least Sh10 million if they accept it.

Already The Standard has established that three managers have indicated their willingness to take the deal, but the other 12 are said to be uncomfortable and are reading mischief in the entire proposal.

The managers being asked to take the deal have been charged with corruption in relation to irregular tendering for purchase of transformers.

The transformers purchased were alleged to be substandard and worth more than Sh408 million.

They are all facing more than six counts, including committing economic crimes, abuse of office and conspiracy to defeat justice.

According to the law, all the officials are innocent until proven guilty. They remain suspended and on half pay until the cases are completed. Kenya Power cannot fire them.

However, due to the protracted nature of the cases, the parastatal board can negotiate with them to take early retirement, and pave way for the recruitment of new managers.

Energy Cabinet Secretary Charles Keter, when contacted, said the board was only exploiting available options to ensure the managers do not suffer unfairly.

He said Kenya Power did not have to suffer since the dockets the managers held were crucial, and those holding them now were doing so in an acting capacity.

“We have 33 witnesses lined up. Only seven have given evidence. The case might drag for years and take a toll on the management of the parastatal,” said Mr Keter.

“Those on permanent and pensionable terms might be difficult to terminate their employment. However, those at the age of 59 or on contract can opt for the deal.”

The company, through board chairman Mahmoud Maalim, wrote to the officials last week asking them to consider "mutual termination of their employment."

“Without prejudice to other recognised avenues through which separation of employment can occur, and taking into account the cordial relationship the company has enjoyed with you during your years of service," reads the letter to the affected officers.

“The board invites you to consider mutually terminating your services with the company on the terms set out,” reads the offer.

In addition, the officers will get pension computed and paid in accordance with the pension scheme trust deed and rules, the full sponsorship of a three day pre-retirement training as the company bears all tax costs.

The offer is a follow-up to the letters dated 17 July, 2018, when the board suspended all the officers until their cases are concluded.

“The board is scheduled to sit today to review our responses. We read malice in the whole thing, and feel like someone within the ministry is eager to replace us,” complained one of the affected managers.

Others who confided in The Standard concurred, saying they read a conspiracy to oust them in the whole approach.

“It seems there is already a lineup to take over our slots. This is also likely to happen in other parastatals if not forestalled,” another official criticised the move.

They faulted the push to hasten their dismissal, pointing fingers at senior officials within the Government.

They called on Parliament and the rest of the Government to ensure due process was followed in their dismissal if it is to take place.