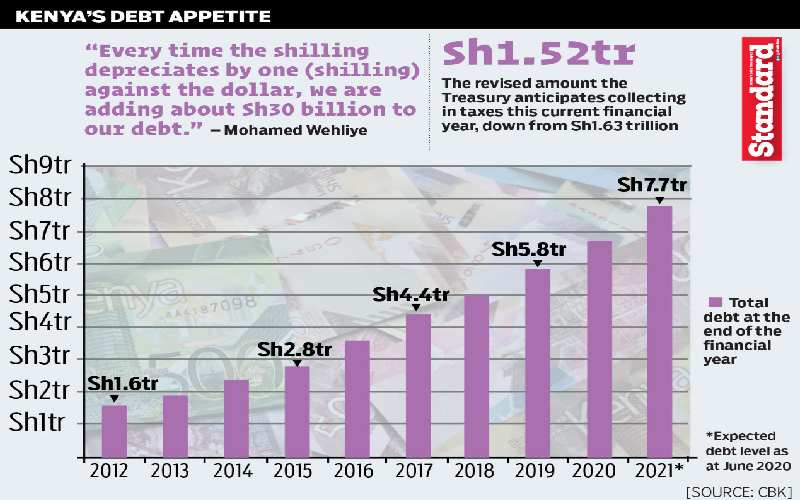 Experts have faulted the expected increase in the government’s borrowing target for the 2020-21 financial year to Sh1 trillion.

They termed the move by the National Treasury ill-timed, coming at a time when it has announced austerity measures.

“The Big Four agenda is not feasible. This administration cannot get us out of the hole they put us into,” said Mohamed Wehliye, a senior analyst at Saudi Arabia Monetary Authority.

In the Budget Review and Outlook Paper (BROP) 2020, Treasury increased its borrowing target to Sh1 trillion following depressed revenues in the wake of Covid-19.

This saw the Exchequer revise downwards its revenue targets by Sh110 billion as Kenya Revenue Authority (KRA) collected less in taxes, particularly in the fourth quarter of the 2019-20 financial year, stifled by the containment measures instituted by the State to curb the spread of the virus.

The budget deficit, or the difference between the country’s expenditure and its revenues, had initially been estimated at Sh898 billion.

Wehliye faulted the government’s budgeting, saying that with the reduction of revenue, it would have been prudent to revise expenditures down.

“Our revenues are overstated. They have now revised the revenues down. Every revenue item except income tax, which has gone up by Sh14 billion, has gone down,” he said.

“We are basically now saying we are going to be short of Sh110 billion in this financial year. I would expect us to cut it somewhere from the expenditure.”

Instead, said the financial expert, the Treasury decided to increase both its foreign and domestic debt, adding to the country’s debt stock.

The Treasury also revised downwards its revenue target for the current financial year from Sh1.63 trillion announced in June by Cabinet Secretary Ukur Yatani in his budget speech to Sh1.52 trillion.

“Nobody can touch the issue of expenditure in this country, and we don’t understand why; that is the problem we have,” noted Wehliye.

XN Iraki, an associate professor at the University of Nairobi, agreed that the reduction of expenditure is the most viable means to manage the revenue gap. He, however, maintained that the debt level is inevitable.

“We cannot realise as much in taxes as we could (before Covid-19), with people losing jobs,” said Iraki.

“Public officials should have their expenditures cut down. We could all drive Vitzs... the debt problem is a universal one, everyone borrows, but the problem is how you use the money.”

He maintained that the country’s development model should be restructured, expressing discomfort at the determination to develop at the same rate as some of the biggest economies in the world on debt.

“We cannot expect to develop like China or the United States,” said Iraki.

Meanwhile, Wehliye said countries like Japan and the US are known for taking big loans, the fact that they borrow in their currencies means their repayments are lower.

“Japan and the US are wealthy countries. They also borrow in their currencies. Every time the shilling depreciates by one (shilling) against the dollar, we are adding about Sh30 billion to our debt. Remember we were at Sh101 to the dollar just a few months ago. We are now at Sh108. We have added Sh210 billion in less than six months! You cannot compare that to America, which has the dollar as the reserve currency to the world, and where nothing happens in terms of foreign currency risk.”

Studies have shown that Kenya is among countries most likely to default on its loan repayment obligations due to increased dependence on expensive loans.

Iraki said Kenyans’ don’t-question-anything attitude is one of the main reasons public funds are misused and the loans hardly accounted for.