As the old adage goes, the more things change, the more they remain the same. At least in our context, that can readily be said of the anti-corruption war.

The resignation of EACC chairman Philip Kinisu after a spirited attempt to ward off attacks over his company’s involvement in business deals with a government agency highlights the challenges facing the anti-corruption war. When he took the helm of the anti-graft agency, many Kenyans believed the agency would change the commonly held perception that it has lost the war on corruption.

Kinisu had a distinguished professional career at a leading global financial services firm. I hoped we had the right man who understood the agency‘s business and had necessary ethical approach to halting sleaze in public institutions.

I believe it was not tenable for him to continue at the helm of the agency given the allegations leveled against him in Parliament, and the open disquiet by his commissioners and staff. His continued stay would conflict with the provisions of Chapter Six of the Constitution on leadership and integrity that requires him as a state officer to ‘promote public confidence’ in the office he holds, and bring ‘honour and dignity’ to the office. He had lost the fight and did the honorable by quitting.

Despite the spirited efforts to enhance the legal and institutional mechanism to fight graft in public service in the past two decades, public perception is overwhelming that the war is lost. This perception is strongly supported by annual reports of public watchdog institutions such as the Auditor General, Controller of Budget and EACC itself. Globally, the country’s ranking in corruption perception index is dismal, and among the worst.

Its a perception that defines our relationship with the world. When US President Barack Obama visited the country last year, corruption was the key focus of discussion with the government. Our President has been pretty candid about the rot in our public service at both the national and county levels.

Are we as a nation committed to the war on corruption? Highly unlikely. The vice is so pervasive in our society that it no longer carries a social stigma to be associated with graft. On the contrary, those implicated in corruption invariably and enviably enjoy the society’s protection and respect, especially if your ‘eating’ has improved your wealth status.

Wealth has become the measure of success in our society but it matters little how you made it. The peer pressure to make it has encouraged many to abuse their office and confer on themselves personal benefit.

The society’s indulgence in the vice has made it nearly impossible to halt the slide into deeper corruption. Indeed, many now feel irritated when discussion on corruption comes up because it has become a way of life. It is estimated that at least US$ 1 trillion a year is being ‘stolen’ from the world’s poorest countries by criminals and corrupt officials through money laundering, tax evasion and outright embezzlement. Five African countries including Kenya reportedly lost an estimated US$ 15 billion in this regard between 2002 and 2011. Corruption breeds poverty and slows the economic growth of nations.

Reports by the watchdog institutions of massive sleaze and embezzlement in the national and county governments are often brushed aside by the leaders. Each year, we read about reports of billions unaccounted for in various ministries but this is dismissed. In the counties, the situation is worse. The actual flow of looted funds into a new breed of kleptocrats roaming the countryside is done blatantly, and almost rudely. The media is inundated with reports of treasury raids and opulent lifestyles as residents decry poor services.

The departure of Kinisu hot on the heels of his predecessors is a tacit reminder that the anti graft war will not be won any time soon. The graft war is now a game of musical chairs to hoodwink a gullible public that we are in war.

Endless murders show we have an inept leadership

Suppose a host on a live children’s programme suddenly whipped out a hitherto concealed machete and decapitated several children before he or she could be stopped? What doubt about such a person’s guilt could possibly exist?

Focus on Kenya-Japan relations should be business and not aid

President must protect consumers and sign Banking Bill into law 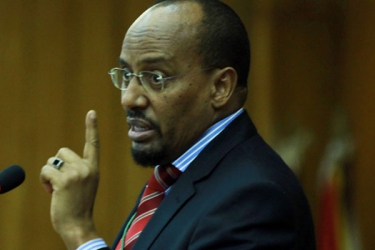