By Odero Charles | 1w ago

Abraham Kibiwott and Amos Serem on Saturday afternoon claimed gold and bronze respectively for Kenya in the men's 3,000m steeplechase at the Commonwealth Games in Birmingham.

Kibiwot, the 2018 Gold Coast silver medallist and one of the leading runners from 2022, narrowly edged India’s Avinash Sable by 0.05 seconds to win the race.

Avinash Sable settled for the silver after he clocked 8:11.20– that was his personal best and also a national record.

Kenyan Olympic and two-time world champion Conseslus Kipruto finished sixth in the race with a time of 8:34.96. 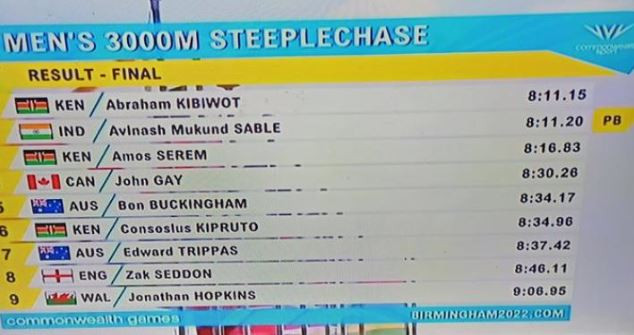 Kibiwot had finished fifth in the World Championships in Eugene, USA, last month with a time of 8:28.95s while Sable had ended a disappointing 11th, clocking 8:28.95s in the slowest ever 3000m steeplechase in the history of the showpiece.

With gold and silver, Kibiwot and Sable made amends for their disappointing performance in the World Championships.