Al-Qaeda planning attacks against US and European countries, video claims 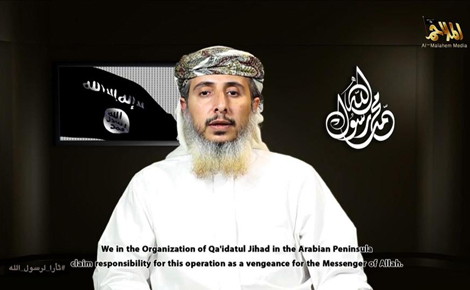 WASHINGTON: Al-Qaeda's Yemen branch called for lone-wolf attacks against the United States and the West in a video posted Tuesday, days after the group claimed responsibility for the Charlie Hebdo killings.

One of the group's ideologues, Nasser bin Ali al-Ansi, urged supporters to conduct what he called "individual jihad," according to the SITE monitoring group, which tracks Islamist extremists online.

"We are preparing and lurking for the enemies of Allah. We incite the believers to do that," Ansi is quoted as saying in the online video.

In a previous video, Ansi claimed Al-Qaeda in the Arabian Peninsula was behind the attack on French satirical weekly Charlie Hebdo, the start of three days of bloodshed in France that left 17 people dead.

Western governments say it remains unclear if AQAP directly orchestrated the violence, although they do believe one or both of the attackers spent time with jihadists in Yemen.

In the latest recording, which was presented in an interview format, Ansi recommended lone-wolf attacks as those were "more harmful."

But, if this was not practical, then supporters should leave Western countries rather than live under the rule of "disbelievers."

AQAP has a track record for launching attacks far from its base in Yemen, including an attempt to blow up an American airliner over Michigan on Christmas Day in 2009.

US intelligence agencies portray AQAP as the most dangerous branch of the jihadist network.

Cristiano Ronaldo has dealt United fans a blow by saying he wants to play in Brazil when he leaves Real Madrid, reports Metro.