Turkana man who is expert in Kikuyu songs 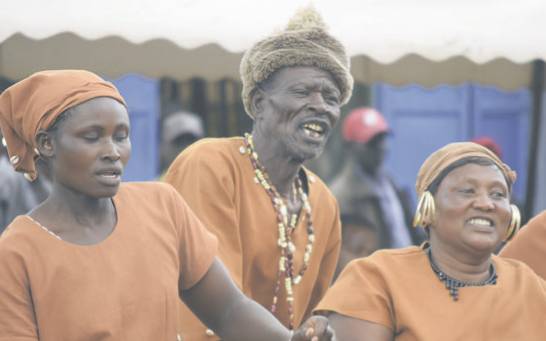 In Ol Joroorok sub-county of Nyandarua County, there is a popular traditional dance group called Sixteen Sisters that is invited to entertain at various functions. Although the group’s name denotes one gender, the truth is there are two men in the group.

The interesting thing is that although the group specialises in Kikuyu traditional songs, one of the men is from the Turkana community, which is the second-largest community after Kikuyu in Nyandarua County. Traditional dance has been part of Jackson Luzusui Ejore (pictured in cap above) for many years.

He has been doing it for the better part of his life. Ejore, 68 years and a father of 11 started doing it while at school in Laikipia before the family migrated to Nyandarua where he continued with his passion by forming a dance group of his Turkana people.

“Since I was at Rumuti Primary school and Nanyuki High School where I went up to Form Two, traditional dance has been my passion,” he told Mt Kenya Star last week saying he has entertained presidents starting with Mzee Jomo Kenyatta in 1968.

He did not have problems transitioning from Turkana-only group to being a member of the Sixteen Sisters because he is fluent in Kikuyu dialect. He explains that they (men) got into the Sixteen Sister group to give it a gender outlook.

“We (men) had to come in to play chiigamba (instrument made of a tin with broken pieces of glass in it that is worn on the leg and makes a rhythmic sound when the leg is shaken continuously) since women don’t play it,” Ejore said.

The Sixteen Sisters is a group in high demand in Nyandarua with many event organizers seeking their presence for entertainment. The leader of the group, Susan Njeri said the team which was started in 2015 has entertained First Lady, Margaret Kenyatta, and President Uhuru Kenyatta during their tour of Nyandarua.

“The President had given us an appointment to go to State House but the visit did not meterialise because there was a change of governorship,” Njeri said.

She said the group, in addition to being invited to County events, it is also invited to dowry gatherings where they entertain guests. The group started as a merry-go-round one that was involved in chicken rearing business.

“But we needed something to do during our free time. That is how we started doing traditional dance,” Njeri said.

She explained that the name Sixteen Sisters was coined because originally the group was made up of 16 ladies. Later they had to include men to comply with the gender rule. That is how Ejore and Bedan Kinuthia came into the group.

Ejore says the traditional dance relieves him off any stress thus making him feel youthful. Despite his jovial stance, Ejore reveals that he has been battling a person who is laying ownership claim on a six-acre piece of land where he is staying with his family.

“I was allocated the land by the government of President (Mwai) Kibaki and I have all documents but this other person came and constructed a building on the land,” he said.

Ejore said the dispute at times threatens to turn ugly because the other claimant at times he brings goons in a bit to evict him and his family.

He said the Nyandarua West Deputy County Commissioner and entire locational administration is aware of the dispute. Even with that dispute, Ejore maintains that he lives a stress-free life, thanks to his passion for music.