By Daniel Chege | 1mo ago

Six men have denied killing four women in Mawanga area of Nakuru County on dates between December 2, 2021, and June 24, 2022.

Evans Michori, Kevin Omondi, Josphat Simiyu, Julius Otieno, Dennis Alusiola and Isaac Kinyanjui appeared virtually before Kericho High Court Judge Asenath Ongeri on August 3, 2022. The six who were held in Nakuru police stations were arraigned in Kericho because the duty court sits there this week for the August recess.

They, however, denied killing Beatrice Akinyi, 21, on December 2, 2021, at Kwabuda in Nakuru North Sub County, Nakuru County. They also denied the charge that implicates them in the murder of Grace Wanjiku, 20, on June 15, 2022, at Mawanga area near All Nations in Nakuru County. The six men further pleaded not guilty to killing Susan Wambui, 38.

“The accused persons murdered Wambui on June 21, 2022, at Ngomongi Village of Nakuru North Sub County,” read to the charge sheet in part.

According to the prosecution, the six are also said to have murdered Diana Opicho, 23, at her home in the Workers Mawanga area in Nakuru County on June 24, 2022, a charge they denied. Through their lawyers, they pleaded with the court to release them on a reasonable bail term. They said that they were not a flight risk and would respect court summons during the mention and hearing of the case.

However, in an affidavit filed before the court, Inspector Peter Kamau wants the accused to be denied bail. He avers that the accused persons allegedly murdered the four women and may kill more if released. Kamau, the investigating officer states that the six escaped and the police took long to pursue them.

“They are a flight risk and were arrested in their hideouts. Upon realising they were being sought, they switched off their mobile phones, making it difficult for police to track them,” claims Kamau.

Kamau is adamant that the six know witnesses who have placed them at the scenes of the crime and if released, they will interfere with witnesses. He adds that the accused persons’ grievous charges may attract death sentences and the same may be an incentive to abscond court if released.

“The cases are of public interest and have drawn emotions from the residents of Nakuru and it is prudent that the six are held in custody for their own safety, pending the conclusion of the trial,” reads the affidavit.

Judge Ongeri directed the detectives to serve the affidavit to the lawyers of the six for a response. She denied the six bail pending the hearing and determination of the bond opposition application.

The case will be mentioned on October 4. 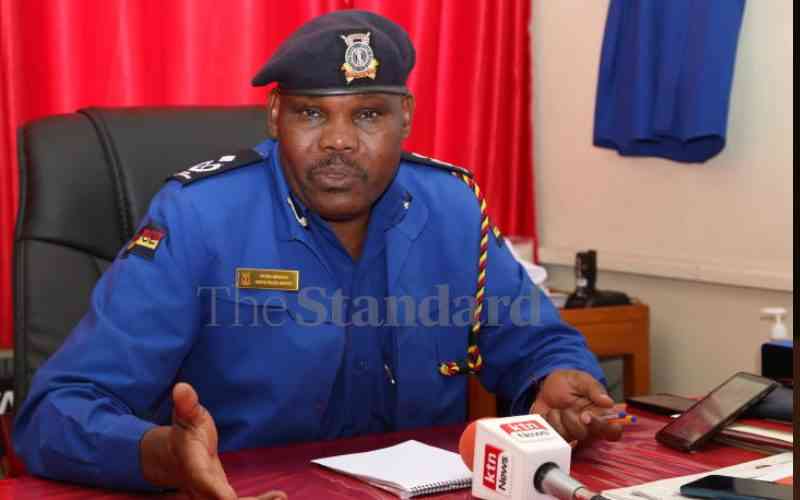 Suspects linked to three more murders
Police said that a tracker of a motorcycle recovered from some of the suspects placed them at various scenes of crime.
Rift Valley
By Daniel Chege
2 months ago

Security concerns delay charges on six linked to killing
Sources said the authorities feared that members of an outlawed criminal gang were planning to crowd the court.
Rift Valley
By Daniel Chege
2 months ago

Two members of 'Confirm' gang set on fire by angry mob at bus stage
The pair were cornered yesterday evening while trying to snatch phones from unsuspecting women at the busy matatu terminus.
Rift Valley
By Bradley Sikolia
2 months ago
.

Lawyer Paul Gicheru is dead
National
By George Maringa
19 mins ago
Hockey: Kisumu Lakers keen to bounce back after poor start
Hockey
By Washington Onyango
22 mins ago
Basketball: Lady Bucks struggle as Storms move second in KBF standings
Basketball
By Washington Onyango
1 hr ago
Premium How evils of land grab were birthed more than 100 years ago
National
By Amos Kareithi
2 hrs ago
.

By George Maringa 19 mins ago
Lawyer Paul Gicheru is dead

By Washington Onyango 22 mins ago
Hockey: Kisumu Lakers keen to bounce back after poor start

By Amos Kareithi 2 hrs ago
Premium How evils of land grab were birthed more than 100 years ago
.