By Patrick Alushula | 1mo ago 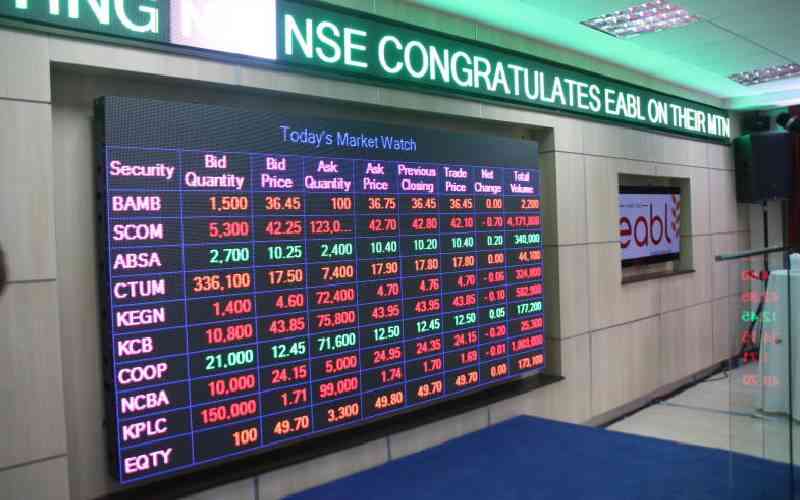 Investors with large stakes in multiple sectors, including banking, and telecommunications, have suffered huge losses as the Nairobi bourse shed Sh653.7 billion in six months, erasing the 2021 gains.

The Nairobi Securities Exchange (NSE) closed last Thursday with the combined value of all stocks at Sh1.939 trillion compared with Sh2.592 trillion at the beginning of the year.

The Sh653.7 billion decline in six months means that the Sh256.2 billion that NSE investors had made in the entire 2021 had been wiped out and left them worse off than they were at the peak of Covid-19 disruptions.

Drops in the top five counters — Safaricom, Equity, KCB, Cooperative Bank and East Africa Breweries Ltd (EABL) — where NSE investors have tied about 70 per cent of their wealth on the bourse has seen equities emerge as the worst-performing financial  assets in the six months.

The equities market reversed from the near-12 per cent returns of last year to negative returns on the back of shares’ depreciation triggered by reduced appetite by foreign investors in emerging markets.

Equity’s hit on the bourse is despite the lender posting profit growth to stay ahead of KCB as the most profitable lender for the second year running and also resumed dividend payments.

Russia’s invasion of Ukraine in February and the jump in interest rates in the developed markets such as the US have all served a beating to NSE, which also has a General Election to navigate through on August 9. Not even the improved performance of companies and dividend payouts have helped stop NSE’s decline — a trend that has seen the Nairobi bourse emerge as the third-worst performing bourse in Africa, according to an analysis by the investment bank, EFG Hermes. Equity’s Mr Mwangi has also taken a hit from Britam Holdings. The insurance firm has seen its share price drop by 25.33 per cent.

The drop in Britam’s share saw Mr Mwangi, with a direct stake of 2.97 per cent, lose Sh142.5 million as the insurers’ share retreated to Sh5.60 compared with Sh7.50 when the year started.

His village mate and investment partner Peter Munga, who holds a similar stake in Britam, also lost Sh142.5 million to leave his direct stake valued at Sh420 million. Mr Munga, with a 0.41 per cent stake in Equity, also suffered a Sh150.32 million loss as his stake in Equity closed in June with a value of Sh662.96 million.

Seasoned investor Jimna Mbaru saw his paper wealth in Britam shrink by Sh370.12 million, while that of Benson Wairegi reduced by 192.57 million. Mr Mbaru holds a 7.72 per cent stake in Britam, while that of Mr Wairegi is 4.02 per cent.

Co-operative Bank Group CEO Muriuki, with a 1.75 per cent stake in the tier I lender, has seen the value of his stake dip by Sh210.18 million to Sh1.12 billion.

The share of Co-op, like that of its competitors, has retreated despite the lender having posted the highest ever profit in 2021 and also for the first quarter of 2022, meaning that its fundamentals remain strong.

Mr Muriuki, who is also the top individual shareholder in CIC Holdings, saw his stake reduce by Sh14.49 million as the share shed 4.9 per cent.

John Kimani, who holds major stakes in Kakuzi, Nation Media Group (NMG) and Centum had a mixed bag of fortunes.

Mr Kimani, who is the top shareholder in Kakuzi with a 32.3 per cent stake, gained Sh356.1 million to take the value of his stake in the agricultural stock to Sh2.79 billion as the share rose by 14.6 per cent.

Messrs Baloobhai Chhotabhai Patel and Amarjeet B Patel with stakes in Williamson, Absa Kenya, Co-op Bank, Bamburi, Sanlam, CIC and Carbacid have seen the value of their stakes in these firms drop by Sh110.87 million in the six months to Sh3.24 billion.

Paul Ndung’u, who has spread risk in different NSE companies, only reaped from Car & General although Olympia Capital added him Sh1.44 million in paper wealth.

He is the top individual investor in the firm.

While Mr Ndung’u saw his investment in Car & General rise by Sh87.54 million to Sh142 million, his stake in Express Kenya cost him Sh1.63 million. Other losses were in Uchumi (Sh1.02 million) and Home Afrika (Sh0.55 million).

Mr Mwangi Peter King’ori also suffered a combined loss of Sh8.31 million in his investments in HF Group, NMG and Liberty even as Sh3.14 million gains from Sanlam and Carbacid failed to shield him from an overall loss position.

Beneficiaries of shares held by the top shareholder in Centum Chris Kirubi, who died mid-June last year, have had to contend with an Sh889.52 million drop in the market wealth. Mr Kirubi held 30.94 per cent stake.

Centum CEO James Mworia saw his stake drop by Sh24.51 million to Sh55.5 million on the back of the reduced share price of the diversified investment firm.

Francis Thombe Nyammo, the top individual shareholder in Longhorn Publishers, saw the value of his investment in the firm drop by Sh19.22 million to Sh44.85 million.

Top individual shareholders in Kenya Power Hirani Naran Khimji and Hirani Virji Khimji saw their 1.2 per cent stake drop by Sh7.63 million as the share of the power distributor continued to fall.

By Macharia Kamau 3 hrs ago
Premium With polls done, you can as well kiss State subsidies goodbye

By Patrick Alushula 13 days ago
Premium The making of Sh594m fraud: 'We thought we were buying an elephant'