By Graham Kajilwa | 4mos ago

When you think of the police, one thing that stands out is the discipline that comes with being in that uniform. How neat one should be, a stickler for time, an observer of ranking and the selflessness that makes them give their life for the sake of others and the country.

Considering financial prudency requires some level of discipline, how much of this plays a role to their saving culture might be the reason why the Kenya National Police DT Sacco has continued to grow.

Since the police are way more disciplined than the average citizen as they are the law enforcers, it must also be they apply the same to their finances which explains why their Sacco –Kenya National Police DT Sacco –boasts of an asset base of Sh46 billion according to the chair David Mategwa, who is an active officer.

“Where we are, it was not there. This building was put up in 2014 with our capital. We never touched the members. This is a milestone,” says Mategwa.

The Sacco boasts of over 65,000 members a growth from just 609 when it began in 1972. It may be argued that they always have a ready pool of members to join every year when the National Police Service recruits more officers which might be playing a role in their growth.

However, Mategwa says no one is coerced to join.

“During the recruitment of the police officers, that is where we usually go to recruit them also. We go to the ground where they are being trained, talk to them, convince them and make sure they join the Sacco,” he says during an interview with The Standard.

“We normally recruit 100 per cent of the newcomers,” he adds. The growth is despite the Sacco losing members as well through illnesses, fraud-related cases and terrorism as they are the ones on the frontline.

Even with the stringent discipline that comes with the force, there have been cases before systems were automated where dishonest members would forge payslips to apply for loans. Such money would be a loss to Sacco as it is a loan that cannot be recovered.

Mategwa says such cases have reduced as the Sacco now has 30 per cent of its operations –including loan applications and deposits –being done virtually.

He insists that no one is forced to join.

“We do not force anybody to join. We talk to them. We inspire them. We tell them if they join good things will happen like when they retire. When they make money, they need to plan for their retirement as early as they join. That is the inspiration we normally give to our newly recruited members,” he says.

He confesses that in the early days, having joined the Sacco when he was employed in 1988, many officers used to save very little due to scepticism of the security of their money.

“Some members saved little because they thought the money will be mismanaged by people like me who are leading them,” he recalls.

However today, he says Sacco is a self-sufficient business.

“What we have done is to make sure that we have capital. We need to have a very strong capital. Like now we have a tune of Sh14.4 billion which is capital for this organisation. That means that if all members leave with their contributions, Sacco will remain standing with Sh14.4 billion. We have money that is at zero rates. We give them loans at zero rate,” he says.

When Mategwa took leadership of Sacco in 2013 as chair, the asset base was Sh8 billion. Now, he says it is at Sh46 billion and the chief executive officer Solomon Atsiaya projects that by the end of the year it will be Sh50 billion. Simon Tanui, general manager in charge of operations says the financial discipline of the Sacco members goes beyond just having been in the disciplined forces.

“Yes they are disciplined from that aspect (financial) as well. But as Sacco management, we have done so much in terms of educating our members. We invest so much in member education. Saccos believe in nine key operating principles. One of them is member education,” he says.

Tanui says that because of ongoing member education they have done so much in financial literacy programmes to members which include financial planning, entrepreneurial skills, preparation for retirement, and money market.

He adds that Sacco does national and regional top savers programmes, where they do member education from county to the next impacting knowledge. He says it is better when members are financially enlightened as the Sacco managers, board members and staff.

“Training is key for us. That is why I am proud to say our members are financially disciplined because one; they come from the disciplined force and also because of education and training we always do,” says Tanui.

Atsiaya, Sacco’s chief executive officer notes that members have seen the importance of being in a Sacco from the opportunities to access loans and dividends.

“This year we paid 10.8 per cent. You cannot get it in other sectors. Other sectors will give you four or five per cent. That motivates people,” he says.

“Money is liquid. If you do not preserve it, you have personal demands, you want to eat well, make friends happy,” he says.

He adds that the check-off system of contributions to the Sacco has also helped in instilling financial discipline.

“The Sacco gives you that opportunity to preserve money and also a disciplined kind of saving whereby before you even receive that money, it is deducted from your salary. In the first place you do not even have access to it,” he says.

He adds: “If you do not get that opportunity then I am sorry. You will work, earn money but you won’t see progress.  The only way and platform that has helped people preserve money is sacco.” 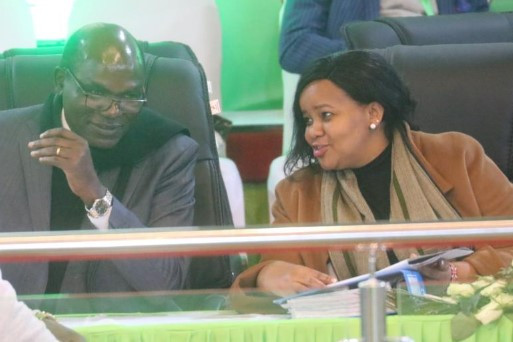 By Macharia Kamau 12 hrs ago
Premium Shake up in Kenya's logistics scene as MSC, Bollor seek approval for Sh695b deal