By Philip Mwakio | 7mos ago 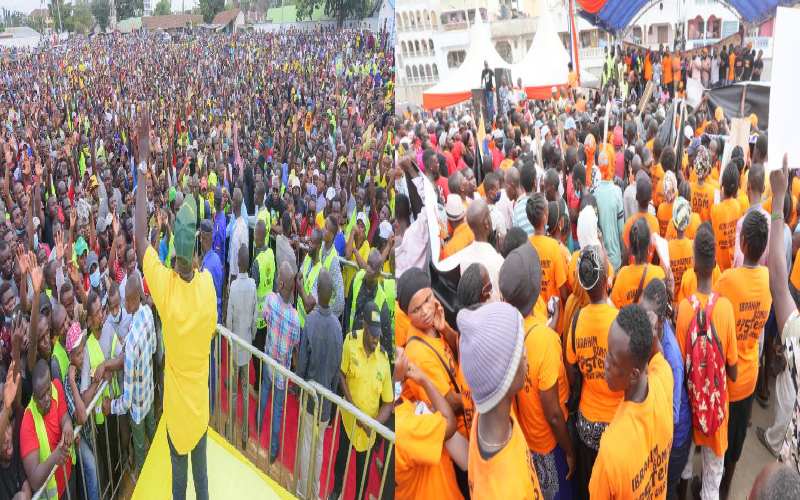 It was a show of might between Deputy President William Ruto's Kenya Kwanza Alliance and a section of Azimio la Umoja leaders in Coast who held parallel rallies in Mombasa yesterday.

The DP reiterated that he will pump Sh100 billion into job creation and Sh50 billion for small scale traders. Ruto also said Kwale Governor Salim Mvurya will become one of Kenya Kwanza principals.

Ruto said the March 9, 2018 handshake between President Uhuru Kenyatta and ODM leader Raila Odinga was the cause of most problems bedeviling the country.

"People who were given jobs on merit have been dismissed without reason. Those who think they have powers to plan for Kenyans will be in for a rude shock in August," he said.

Mudavadi said they joined Ruto because their agenda was the same of reviving the economy and create opportunities for thousands of jobless youth in the country.

"Let the visitors sample the various attractions sites. We are not bothered with their many trips because we know Mombasa is an ODM zone," said Nassir in reference to Ruto's tour.

He said Coast has for the last 15 years supported Raila because voters believe in his agenda and that the 1.8 odd million voters will not abandon him when he is about to ascend to power.

''The economic model fronted by Raila is achievable. He has made it clear that he shall seal all the loopholes of corruption," said Nassir.

Likoni MP Mishi Mboko said they had settled on Abdulswamad to succeed Governor Hassan Joho in August, saying: "We hope that once Raila wins the presidency, he shall appoint Joho to one of his key ministries."

By Peter Kimani 46 mins ago
Yes, we could change our fortunes if we embrace vices as pillars of nation-building